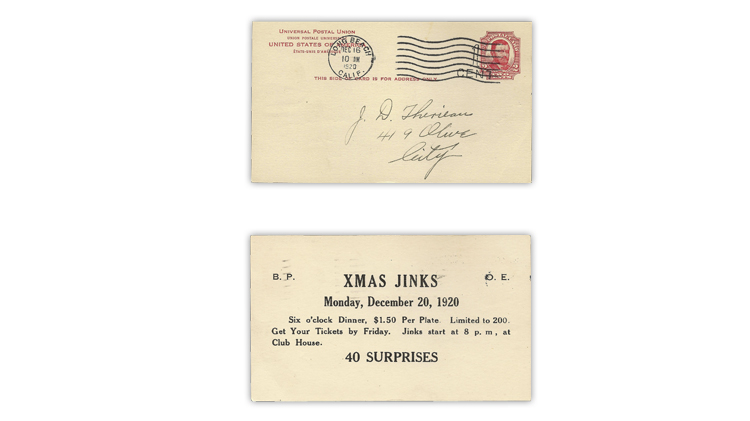 This United States postal card rarity, known as the Mitchell card, was postmarked Dec. 16, 1920, in Long Beach, Calif. A couple from the Midwest rediscovered the card in early 2020. The card is one of four known examples of the surcharged 1¢ Grant postal

Postmarked 100 years ago, on Dec. 16, 1920, the famous “Mitchell card,” as this United States postal card has been known, is so rare that, after considerable searching, an image of it cannot be found online for the collecting public to see.

In fact, in 2013, experts from the United Postal Stationery Society only had a poor quality, black-and-white photocopy of the card to use for a scholarly article about it in the society’s journal, Postal Stationery.

In 2020, however, this rare card surfaced in an inherited collection. That card is shown, front and back, with this article.

Cataloged as Scott UX36 (UPSS S52), just four examples of this 1920 1¢ on 2¢ red on cream paper Grant postal card are known to exist; however one of these has not been seen for almost a century and is presumed lost.

Known as the “Newman card” and the “Third card,” the other two confirmed Scott UX36 cards were postmarked March 21, 1921, and March 22, 1921, respectively. They were sent by the Long Beach, Calif., public library to inform readers that the books they had reserved were available.

These two cards have appeared at auction several times, with the record price of $109,250 being set in 2010 for the Newman card.

The Mitchell card has never appeared in a public auction and has only changed hands in a few private transactions since its discovery nearly a century ago.

In 1965, a former owner of the card, George Slawson, wrote in Postal Stationery, “Speaking in terms of availability, the 24¢₵ airmail invert [Scott C3a] is a downright commonplace item compared to this card.” The UPSS republished Slawson’s article in its journal two times, in 1984 and 2013.

The Mitchell card can be considered the king of U.S. postal cards. It is the rarest U.S. postal card in existence and has the earliest reported postmark of the three confirmed Scott UX36 cards.

It was discovered by Dr. Walton I. Mitchell (1877-1960), described by Slawson as “long the outstanding postal card man in the United States.”

Mitchell obtained it from a member of the Long Beach Elks Club, which used the card to invite members to its annual Christmas dinner and “XMAS JINKS” that took place on Monday, Dec. 20, 1920. This card is the only confirmed Elks Club example.

The fact that the three named Scott UX36 cards (Mitchell, Newman and Third cards) have been used in commerce is a testament to their authenticity. They are the only cards that are recognized by experts as authentic.

These cards were created from 1911 2¢ Grant postal cards for international use (Scott UX25) that were revalued with a 1¢ surcharge. The surcharge was done in Los Angeles and appears as “1 CENT” in two lines over the 2¢ indicium.

During World War I, the postage rate for domestic cards was raised to 2¢ to cover part of the cost of U.S. participation in the war. Many 2¢ domestic postal cards were printed for this use.

After the war, the rate was lowered to 1¢, and these 2¢ cards were surcharged to 1¢.

The 1920 and 1921 surcharges have been the subject of study and collecting.

Multiple cities across the country used canceling machines to revalue postal cards with surcharges. Each die for the overprints was slightly different in size and shape, which allows each city’s die to be distinguished from the others. Therefore the three known Scott UX36 cards used in Long Beach can be clearly identified as having been surcharged in Los Angeles.

Given this background, imagine the surprise and delight of a middle-aged couple from the Midwest discovering in early 2020 this major six-figure rarity among the contents of an inherited collection of stamps and postal stationery. They did a little dance.

Unfortunately, because of illness, the wife’s father, who had built the collection, had been unable to tell the couple much about it. However he had given them valuable advice years ago that many other collecting families should remember, “Know what you have.”

The couple followed that advice and began examining and cataloging the collection. They have found many other important postal cards, stamped envelopes, stamps and other philatelic items, but the Mitchell card is, by far, the rarest and most important item in the collection.

It has been heartening to work with this couple, who are not collectors, because they have rolled up their sleeves and have learned about each item in the collection while inventorying it.

Indeed they know what they have. At some point, they plan to sell the Mitchell card and the rest of the collection, but for now they are having fun owning the card during the 100th anniversary of its postmark, the earliest of the three confirmed Scott UX36 cards.

Mark Ferguson is a professional numismatist and stamp enthusiast who has been acting as an agent for the finders of the Mitchell card discussed in this article. For eight years he managed the Coin Values price guide for Coin World, which is published by Amos Media Co., the publisher of Linn’s Stamp News.