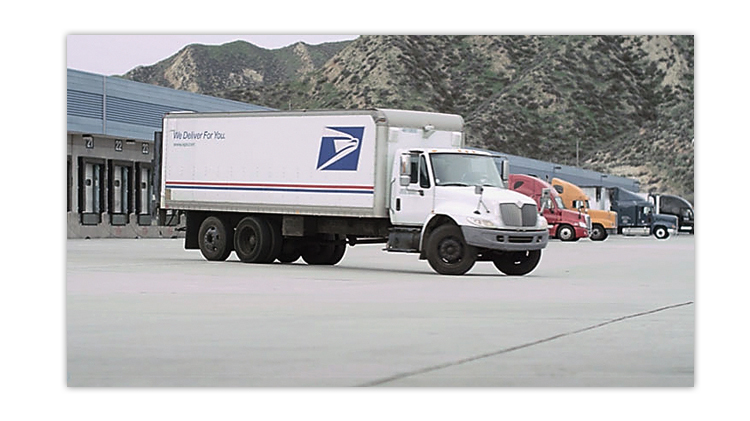 According to news accounts, dozens of tractor trailers waited for days to unload mail at a Cleveland processing plant. Screen capture of mail trucks from a USPS video about mail processing.

A combination of postal workers stricken with COVID-19 and record holiday volume has led to chaotic mail problems in some areas of the country.

The situation became so serious that the United States Postal Service posted a warning on its website during the Dec. 13 weekend.

“Alert: USPS is experiencing unprecedented package increases and limited employee availability due to the impacts of COVID-19,” the notice said in capital letters. “We appreciate your patience and remain committed to delivering the holidays to you.”

The Postal Service acknowledged the problem in a Dec. 14 news release urging customers to mail as early as possible this holiday season.

Kristin Seaver, the agency’s chief of retail and delivery, said in the news release that the Postal Service was “committed to making sure gifts and cards are delivered on time to celebrate the holidays.”

The release also said: “While every year the Postal Service carefully plans for peak holiday season, a historic record of holiday volume compounded by a temporary employee shortage due to the Covid-19 surge, and capacity challenges with airlifts and trucking for moving this historic volume of mail are leading to temporary delays.”

“These challenges are being felt by shippers across the board,” it added.

The problem was so serious that five processing facilities imposed an embargo on incoming mail shipments and two others redirected mail to other locations for processing, according to postal memo sent Dec. 14.

Among the areas affected were New Jersey and the cities of Birmingham, Ala.; Phoenix, Ariz; Detroit, Mich.; Philadelphia, Pa.; and Cleveland and Cincinnati in Ohio.

News accounts from Ohio told of dozens of tractor trailers waiting for days to unload mail at a Cleveland processing plant.

Motherboard, a Vice.com news website, reported that plants in Louisville, Ky., and Greensboro, N.C., also are facing problems with large volumes of packages remaining inside the plants, sometimes for days.

The Dec. 14 report by Aaron Gordon for Motherboard said the problems were similar to those reported around the country after new policies were put in place after Louis DeJoy, a logistics expert from Greensboro, was named postmaster general this summer.

However, Motherboard said the current delays “don’t appear to be the result of those policies being reinstituted.”

The website quoted Bryan Tintes, who runs a key replacement service, saying that he expected delays during the holiday period.

“Honestly, I could never imagine it being this bad,” Tintes said.

Here is just one example of a mail delay. A Priority Mail package posted in Raleigh, N.C., on Dec. 7 arrived in Fairfax, Va., on Dec. 15, five days after the Postal Service’s promised delivery date of Dec. 10.

In an email to Linn’s, Stephen Kearney, executive director of the Alliance of Nonprofit Mailers, said of the accounts of trucks with mail stuck outside processing plants: “This is an irretrievable loss to the supply chain providers that already are stretched thin.”

Kearney said he has been told that the situation can be attributed to “a shortage of employees showing up for work at USPS plants.”

In a Dec. 15 report, the Washington Post blamed the package surge at USPS on competitors Federal Express and United Parcel Service, saying they had cut off delivery service to some retailers, forcing them to turn to the government-run agency.

The USPS expanded its Sunday package deliveries on Nov. 29, according to the Dec. 14 new release, and also said that “for an additional fee” Christmas Day deliveries will be provided in select locations.

The Kansas City's Stamp Fulfillment Services center was also slow in processing stamp orders. Workers there are handling 50,000 orders a day, according to a postal spokesman.