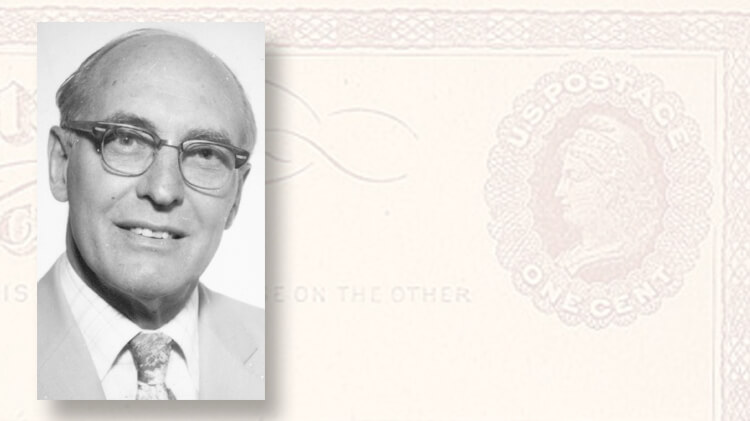 Mr. Fricke was a longtime collector of postal stationery who received the 1981 APS Luff award for distinguished philatelic research, was inducted into the APS Writers Unit hall of fame in 1989, and was honored in 2016 with the APS Charles J. Peterson philatelic literature life achievement award.

He also earned additional national and international awards for his philatelic exhibits.

Beginning in 1961, he contributed articles to The Congress Book, the annual publication of the American Philatelic Congress, including studies of the first postal card involving the identification and classification of die flaws. He also lectured on the subject of the first U.S. postal card at philatelic exhibitions.

Along with writing and editing the handbooks, Mr. Fricke also prepared original illustrations.

Although his primary interest was in U.S. postal cards, Mr. Fricke also enjoyed researching essays and proofs of issued cards, advertising on postal stationery of the world, and first-issue postal cards of the world.

He developed an enduring interest in postal history aspects of commercial picture postcards, documented in his long-running Postcards Over Easy column in Scott Stamp Monthly, and in later articles in Linn’s Stamp News.

He contributed hundreds of articles to Linn’s and other philatelic publications, including The American Philatelist, U.S. Stamp News, Postal Stationery, and Mekeel’s and Stamps.

He once explained the appeal of collecting postal cards by noting, “It is probably the one postal emission that when used, carries the complete story from the imprinting of the stamp design on the card stock through its receipt by the addressee.”

His many affiliations with philatelic organizations included service as president of the United Postal Stationery Society from 1963-64, and on the UPSS editorial committee, where he contributed to the development of the specialized United States Postal Card Catalog.

He was also a member of the Essay-Proof Society and the American Philatelic Congress.

Originally a draftsman, he was employed as an engineering specialist in the design and data control section of Philco-Ford Corp. of Willow Grove, Pa., and was the U.S. delegate and secretary of the NATO committee on standardization of the engineering and drafting symbols.

He is survived by his wife Nettie, whom he married in 1947; their sons David, Michael and Rob; daughters-in-law Susan and Bobbie; and grandchildren Rob and Robyn.