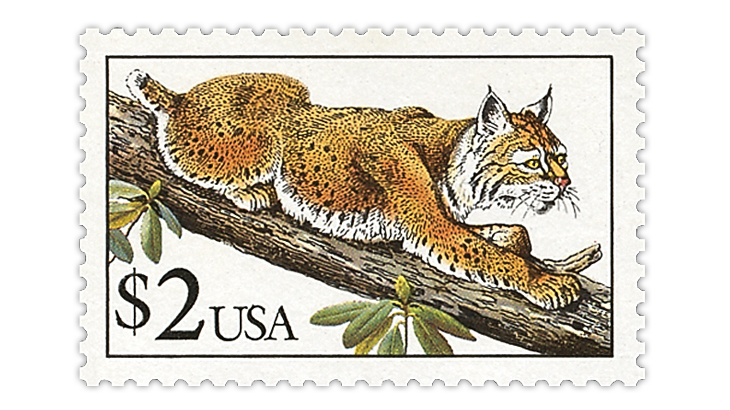 The $2 Bobcat definitive stamp issued in 1990 is one of many stamps featuring an illustration by artist Chuck Ripper.

Working with pencils, gouache, watercolor, acrylics and oils, Mr. Ripper was famous in the field of wildlife art, and he was also celebrated for designing and illustrating many United States postage stamps depicting birds and other animals in natural settings.

In the annual Linn’s Stamp News Stamp Popularity Poll, the North American Wildlife set was the overwhelming choice by collectors as their favorite stamp issue of 1987, and it easily won the vote for best commemorative design as well.

Mr. Ripper was a 50-year-old freelance artist when he was tapped for his first U.S. postage stamp assignment in 1980: a set of four 15¢ stamps celebrating coral reefs (Scott 1827-1830). He was well-known in the field of wildlife art when his work for the U.S. Postal Service began, having already illustrated every National Wildlife Federation conservation stamp issued in the previous two decades.

Born Oct. 28, 1929, in Pittsburgh, Pa., Mr. Ripper studied at the Art Institute of Pittsburgh and worked as a staff artist for the Carnegie Museum of Natural History before serving as a draftsman for the U.S. Army Corps of Engineers during the Korean War.

As a successful freelance artist, Mr. Ripper illustrated numerous magazine and catalog covers. He wrote and illustrated almost a dozen books, and provided illustrations for another dozen written by others, including wildflowers books in the Peterson Field Guides series.

He was celebrated in Huntington, where he moved in 1953 and lived for the rest of his life. Writing for The Herald-Dispatch in Huntington, Megan Osborne noted that a trail named after Mr. Ripper at Harris Riverfront Park features his illustrations.

Mr. Ripper was preceded in death by his wife and one daughter. He is survived by two daughters and three grandchildren.