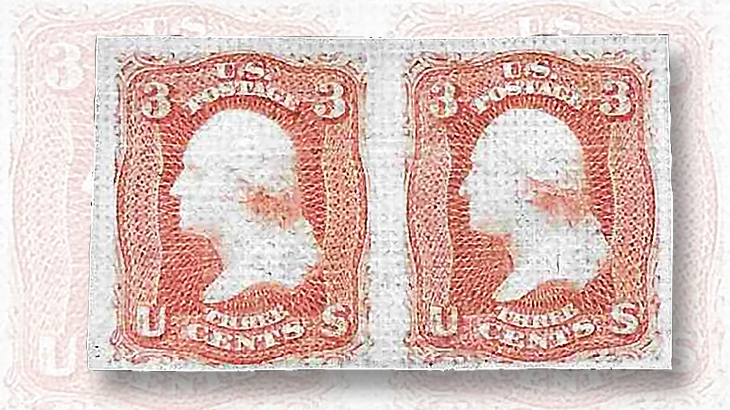 The “A” grill covered the entire area of the postage stamp, as can be seen on this imperforate essay pair of the 1867 3¢ rose George Washington (Scott 79-E15c). 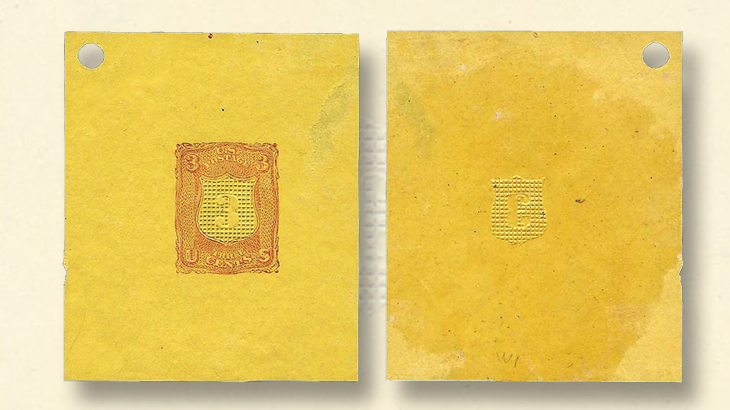 One of Steel’s earliest designs for the grill, left, is this grilled Shield die essay on orange wove paper (Scott 79-E18f). The back of this essay, right, shows the incised nature of the grill. 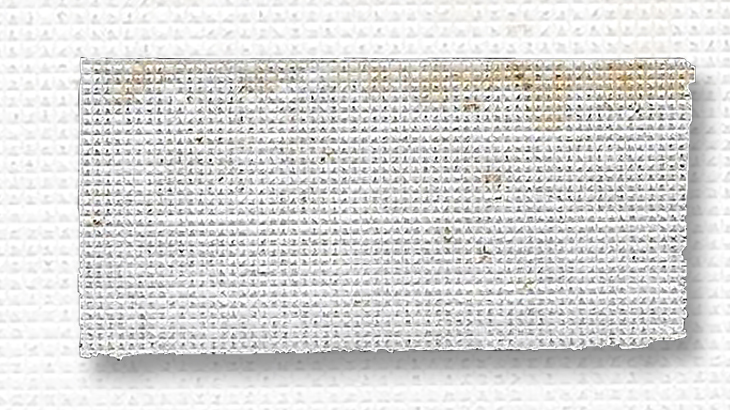 A strong impression of the allover, or “A,” grill is seen on this essay on white wove paper (Scott 79-E14b). The grill points on this essay are in the “up” position. 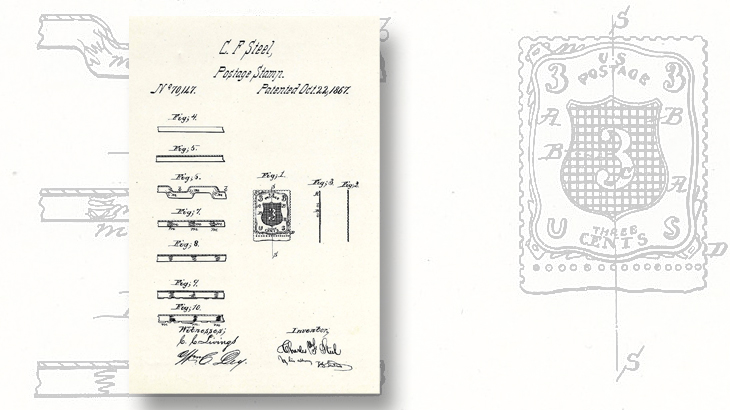 As a result of the outbreak of the American Civil War, in April 1861, there was a concern for the tens of thousands of dollars of United States postage stamps in the hands of postmasters now loyal to the Southern cause.

It was thought that these fiscal instruments could be used in some way to help finance the rebel war effort. New designs were rushed into production by mid-August of that year.

The new stamps sparked a secondary fear that used stamps could be cleaned of their cancels and reused. As the war ground on, the United States Post Office Department sought to produce a stamp that could not be cleaned and then reused.

It was not until a few years after the war, in 1868, that an acceptable solution to the problem, the grill, was accepted by the POD and put into use.

Charles F. Steel of Brooklyn, N.Y., was granted patent No. 70,147, dated October 22, 1867, for the grilling process. Steel was superintendent for manufacturing of postage stamps for the National Bank Note Company and is considered the father of the grill.

Because Steel was an employee of National, it gave the company leverage with the POD to continue its contract to produce stamps. The POD did agree to pay a small premium for grilled stamps.

It is unclear whether Steel transferred his patent to National, but he did receive direct compensation for its use.

The patent papers clearly state that Steel’s invention was for the “improvement in the manufacture of postage stamps.”

There are several sentences in the official three-page summary of his patent that provide an understanding as to how his invention worked and are quoted here:

“The object of my invention is to produce a stamp which shall stick better than usual, and which it shall be impossible to fraudulently remove and use again.

“A part of my invention consists in embossing or partially breaking the paper, so as to open the texture of the paper along certain lines, without removing any part thereof. This allows the stamp, label, etc., to stick better, and allows the oil of the cancelling ink, when such is used, to strike very deeply.”

Illustrated nearby is a copy of the illustration Steel submitted with his patent papers. It shows his original intent for what the finished product would look like.

One of his earliest designs for the grill, based on the original drawing that he submitted for his patent, is pictured here.

Note how the back of this Shield die essay, right, shows the incised nature of the grill.

It appears that this grill was a single subject applied by a plate after the orange wove paper had been printed with the stamp design. This one-stamp-at-a-time process would not work in a mass production environment.

The second grill design gave us the “A,” or allover, grill that would become the first production grill roller. A finished sheet of stamps would be passed beneath a roller that would apply the grill.

A sample of white wove paper that has been strongly impressed with an allover grill roller is shown here. The grill points on this essay are in the “up” position.

A further modified “A” grill roller became the first production roller. Sheets produced from this roller give us the “A” grill stamp, the 1867 3¢ rose George Washington (Scott 79). The essay shown here, a pair of the 3¢ rose Washington, illustrates the coverage of the grill.

The fact that the grill covered the entire sheet proved to be problematic. The “A” grill severely weakened the perforations, causing the sheets to potentially fall apart.

You will find all of these grilled stamps listed in the 2016 edition of the Scott Specialized Catalogue of United States Stamps and Covers, starting on page 25.

The rollers continued to be machined down to reduce the grilling area on each stamp in a sheet.

With the “F” grill, the grill size had been reduced to 9 millimeters by 13mm and only covered about 25 percent of the area of a stamp.

The grill size was further reduced to accommodate the even smaller stamps of the 1869 Pictorial issue.

The grill turned out to be a short term panacea. It was discontinued in 1871, or about one year into what turned out to be National’s final contract for postage stamps. At that point in time the Post Office Department was not inclined to pay a premium for stamps possessing a grill.

The single accomplishment of the grilling process was that it ensured National obtained the contract for the 1869 Pictorials and then the 1870 large Bank Note issues. Yes, the process worked. But not to the degree of satisfaction expected by the POD.

My May 2016 column, in honor of World Stamp Show-NY 2016, will focus on some of the great rarities that exist in the field of essays and proofs.