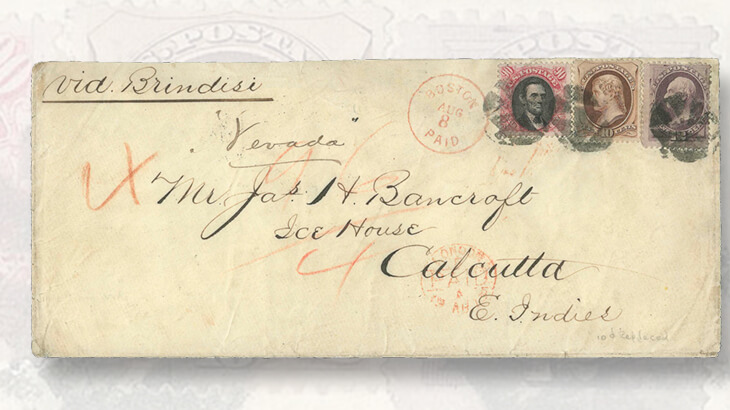 In the summer of 2009, the so-called Ice House Cover realized more than $431,000 in a Robert A. Siegel Auction Galleries sale.

While the stamp market in Chicago is rather small these days — gone are the days of stamp departments at Chicago-based Marshall Field’s and Carson’s — there’s one man who remains committed to selling stamps in the city.

And he had quite a story to tell the Chicago Reader’s “Chicagoans” blog in July.

Charles Berg, the owner of Stamp King, runs and operates the city's last remaining stamp storefront. The Reader published on July 29 a first-person account written by the 74-year-old stamp enthusiast about a historic philatelic story he played a major role in when a revered piece of postal history found its way into Berg’s Norwood Park neighborhood store in 2006.

You can read The New York Times coverage of the sale, which profiles the history of the cover.

The Ice House cover, as its nickname suggests, carried a letter from a New England ice merchant to one of his ice houses in Calcutta, India.

The Times explained in 2009 why the cover became such a rarity, and it mostly had to do with the 90¢ Lincoln stamp stuck to it:

Early collectors mainly sought to fill their albums with stamps that had been soaked off their envelopes, and an item like the Lincoln, issued in 1869 in a run of fewer than 50,000, would have been no exception. When, at the end of the 19th century, collectors began saving entire envelopes — on account of the fascinating tales they revealed about their trips through the world’s postal systems — it became apparent that covers with the Lincoln were no longer to be found.

Fast forward to 1967, when a prized set of roughly 250 covers were stolen from Baker. The set contained the Ice House Cover.

About 10 years later, the FBI had found most of the covers that were stolen. However, the Ice House Cover remained unrecovered.

That all changed in 2006, when Berg, Chicago's aforementioned “Stamp King,” helped recover the long-lost cover.

In his own words, written for the Reader:

I was sitting here one afternoon, and a couple comes in with a cover [a used envelope bearing canceled postage], and they want to know if it has any value. It's a large-size cover, with a 10- and a 12-cent stamp from the 1870s. It also has a black-and-red stamp depicting Lincoln, a 90-cent stamp from 1869. I happened to know that that stamp [is valued at] over $2,000 for a used copy. What is that worth on cover? I turned to the catalog. It's not listed.

So I made a phone call to a friend of mine who specializes in 19th-century U.S. stamps. I told him, “I have an oversize cover that has a 90-cent Lincoln on it, sent from Boston to Calcutta in 1873.” And he tells me, “That's the Ice House Cover. It was stolen almost 40 years ago. You cannot let that out of the store. Have you called the police?” My response was “The couple who brought it in is with me. Can you help me?” He knew what I meant. A few minutes later, there were five squad cars outside. Long story short, five hours later, the cover left in the possession of the FBI.

The cover eventually found its way to that 2009 auction, and from there into the possession of Dr. Arthur K.M. Woo, a renowned collector revered for his international rarities.

The story of the Ice House cover is one of those marvelous stories that makes the stamp hobby, and the fascinating history its items provide, so wonderful. Every stamp and cover tells a story.

Charles Berg experienced that firsthand. Hopefully his Chicago store will remain open for that next big find.