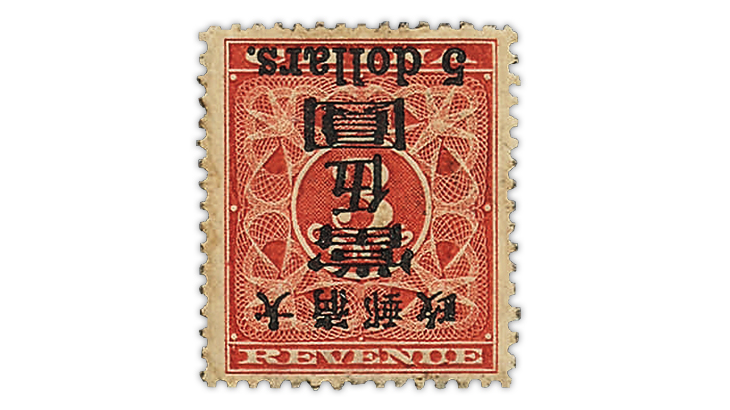 The May 22 Rapp auction includes a rarity from China’s 1897 surcharged red revenue issue, an unused example of the $5-on-3¢ with inverted overprint.

The Rapp auction firm in eastern Switzerland has scheduled a public auction on May 22 offering Swiss, European and Chinese stamps and postal history, plus a broad variety of worldwide collections.

The sale will feature one of China’s 1897 surcharged red revenue stamps, the $5-on-3¢, with the surcharge inverted.

Pressed into service when a postage stamp shipment was delayed, the 3¢ red revenue stamp was overprinted with five different denominations in a couple of different styles, creating what today are coveted issues for any collection of early China.

The 3¢ red with the $5 surcharge upright (Scott 85) is a scarce stamp on it own, but the variety with inverted surcharge (85a), as offered in the Rapp auction, propels the catalog value into six-figure territory.

The stamp on offer is unused with “slightly sweated gum and one shortened perforation at the bottom.” It was authenticated earlier this year by Martin Eichele of Briefmarkenprufstelle Basel and deemed “genuine in every respect.”

The 2019 Scott Classic Specialized Catalogue of Stamps and Covers 1840-1940 lists the unused Scott 85a with a value of $140,000, in italics to identify a stamp that is challenging to value accurately. Rapp has set a starting bid of 30,000 Swiss francs, roughly equivalent to $29,450 in United States dollars in late April.

Swiss stamps dominate the early lots of the Rapp auction, including an assortment of the early cantonal issues, unused and used, on piece, and on cover and off. Among these is an off-cover used pair of the 1843 10-centime black-on-yellow-green Geneva Coat of Arms stamp known as the “Doppelgenf” or “Double Geneva.”

A single stamp from this issue paid for local post delivery, and a pair paid for postage within the canton. The imprinted message across the top of the pair explains the double charge, but in some cases the stamps were cut in the post office such that the right stamp was on the left and the left stamp was on the right, with the explanation across the top similarly rearranged. No big deal if you’re mailing a letter in 1843 Geneva, but a special variety if you’re collecting stamps in the 21st century.