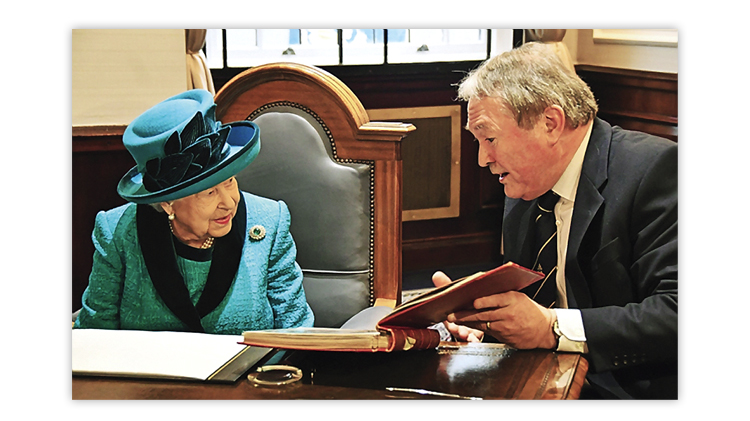 Christopher G. Harman shows Queen Elizabeth II items from the collections of the Royal Philatelic Society London during her visit to the society’s new premises in 2019.

The Collectors Club has named Christopher G. Harman as the 2022 recipient of its prestigious Alfred F. Lichtenstein memorial award for distinguished service to philately. The award was announced at the club’s annual meeting Jan. 12.

Harman, who is British, is the third overseas winner of the Lichtenstein award in four years, following Chris King (of the United Kingdom) in 2019 and co-winner Patrick Maselis (of Belgium) in 2021.

An insurance broker and member (or name) of Lloyd’s of London, Harman lives in Suffolk with his wife, Debbie, and three children.

A specialist in classic issues, forgeries, revenues, locals and cinderellas, Harman’s philatelic accomplishments include many of the hobby’s leading service roles and recognitions.

He signed the Roll of Distinguished Philatelists in 2003. He is past president of the Royal Philatelic Society London, where he has been a member since 1979, a fellow since 1986 and chairman of the expert committee since 2011.

He is the current president of the Great Britain Philatelic Society (with a prior stint in that role 20 years ago) and has served as chairman of the Cinderella Stamp Club since 2009.

Harman is also a member of several societies in the United States, including the American Philatelic Society, American Revenue Association and the Carriers and Locals Society.

Since his first exhibit in 1978, Harman has risen to become a national and international judge, both of traditional philately and literature. He is the president of the jury for the upcoming London 2022 international exhibition.

His most notable exhibits include those on the work of British stamp printers Perkins Bacon; Great Britain revenues; classic British private posts, fakes and forgeries; and postal history of King George VI and Queen Elizabeth II.

He began collecting stamps at age 6 or 7, and though he collected everything, he recalls having had a decent number of Ireland’s early overprinted issues of 1922, thanks to his Irish grandfather.

“I’m pretty sure I soon swapped away the best of them without realizing it,” he said recently.

His collecting eventually grew to encompass not only British areas including classic Ceylon and New Zealand, but Russian zemstvos (local stamps issued by Russian municipal governments or zemstvos), classic Peru and Nicaragua, classic United States, and the revenues of Grenada and Japan.

Harman said his interest in classic forgeries, of which he has a substantial collection, grew partly out of his work with the Royal Philatelic Society London expert committee and partly because studying forgeries is a great way to gain insights into the genuine originals.

His contributions to literature include authoring Great Britain: The Stamps of the Circular Delivery Companies and their Forgeries; sections of the Stanley Gibbons Great Britain Specialised Stamp Catalog, Volume I dealing with postal fiscals, college stamps and circular delivery stamps; and numerous articles and presentations.

“Once you’ve got a decent collection, writing and exhibiting is a way to give back,” Harman said in a recent interview.

“I like to entertain and educate,” he said, adding that storytelling should be the thrust of most philatelic writing.

“If someone is into plating Penny Reds, that’s all right but they should keep it to themselves,” he said with a laugh. “Flyspecking is fine but it’s not a thing you should inflict on a general audience!”

When he’s not collecting stamps, Harman likes to spend time fishing, in particular for trout and salmon in Scotland.

Alfred F. Lichtenstein (1876-1947) was widely considered one of the greatest American philatelists of the first half of the 20th century. The award in his memory was established by the Collectors Club in 1952, and its first recipient was Lichtenstein’s good friend and co-founder of the Philatelic Foundation, Theodore Steinway.