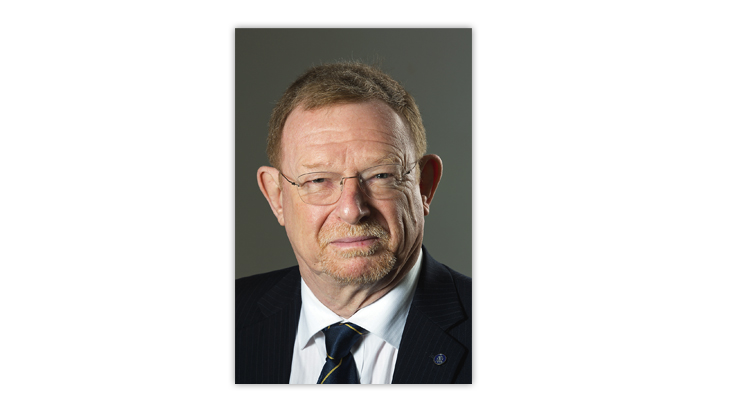 Christopher M.B. King of Great Britain will receive the 2019 Lichtenstein award at the Collectors Club award dinner on May 8.

Christopher M.B. King, a lifelong collector of stamps and postal history and former president of the Royal Philatelic Society London, has been named by the governors of the Collectors Club of New York to receive the 2019 Alfred F. Lichtenstein memorial award for distinguished service to philately.

News of the honor was reported by Roger S. Brody in the January-February issue of the Collectors Club Philatelist, the club’s bimonthly journal.

The award, established in 1952, is given annually to a living individual “for outstanding service to philately.”

King is an active leader in the stamp hobby who has exhibited nationally and internationally with “Schleswig: From Danish Duchy to Prussian Province: Early Mail to 1867” (large gold at Lisbon 2010); “Denmark, Schleswig and Holstein: Invasion, Occupation and Postal Change” (large gold at Indipex 2011); “The Post Offices in Lubeck Before 1868” (large gold at World Stamp Show-NY 2016); and others.

“His contributions towards the preservation of philatelic literature and the heritage of our hobby is remarkable,” Brody said, citing King’s efforts guiding the digitization of the Crawford Library at the British Library and his work as co-founder of the Global Philatelic Library searchable database.

Though King’s interest in the stamp hobby commenced at “a very young age,” his involvement in organized philately began in earnest in 2000.

He has since served as United Kingdom representative at FEPA (the Federation of European Philatelic Associations), a member of the executive committee of the Association of British Philatelic Societies, British delegate to the FIP (International Federation of Philately) commission on postal history, adviser to the board of the Club de Monte Carlo, and in numerous other positions of note.

His work for the Royal Philatelic Society London has included serving as its president from 2013 to 2015, and currently serving as chairman of its publications committee and a member of the council.

King is also a nationally and internationally accredited philatelic juror, including postal history team leader at Finlandia 2017. He writes monthly articles on exhibiting for Stamp and Coin Mart, and has contributed to seminars, conferences and lectures internationally.

His previous philatelic honors include his election in 2014 as signatory to the Roll of Distinguished Philatelists, and the RPSL Bacon medal in 2018.

King will receive his Lichtenstein award May 8 at the Collectors Club awards dinner.

For additional information about the Collectors Club, visit www.collectorsclub.org.