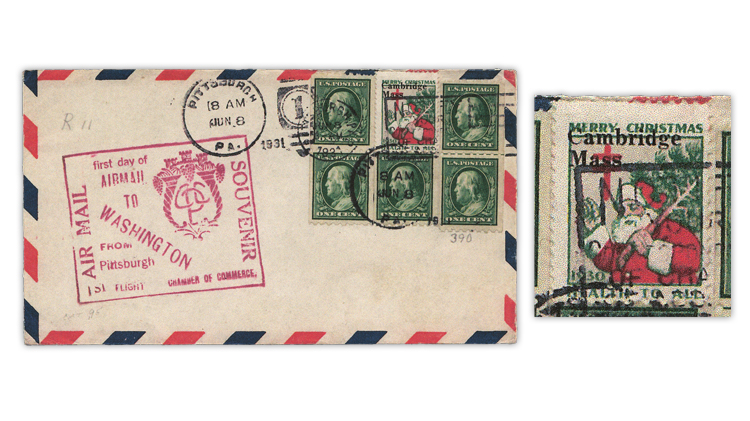 The 1930 national Christmas seal on this 1931 first flight cover has a distinctive addition: the Cambridge, Mass., local overprint. These overprinted seals used on cover are very scarce.

If you didn’t know to look for it, you might miss the “Cambridge Mass” overprint on the 1930 Christmas seal on the airmail first flight cover shown here.

Thanks to Linn’s reader Charles Rebek of Milwaukee, Wis. for sharing this scarce cover.

Starting in 1930, three different U.S. Christmas seals were locally overprinted by the Cambridge Tuberculosis Association for use there. Why? Perhaps the association asked for or expected larger donations for them. Whatever the reason, the idea fell out of favor after the 1932 seal, and no further seals were similarly treated.

Off-cover seals are scarce but not rare and not expensive; on-cover examples are a completely different story. This one would be more desirable had it been canceled in Cambridge around Christmas in 1930, but it is canceled in Pittsburgh, Pa., in June of the following year. Yet, any serious seal collector would be glad to have it as is.

The Cambridge local Christmas seals are not mentioned in the Christmas seal listings in the Scott Specialized Catalogue of United States Stamps and Covers. They are, however, mentioned in the bible of U.S. national seals: Green’s Catalog of the Tuberculosis Seals, U.S. National Christmas Seals (2008), and they are listed in Green’s Catalog of the Tuberculosis Seals, US Locals & Accessories (1983).

Both are published by the Christmas Seal and Charity Stamp Society and can be obtained by writing to John Denune, CS&CSS Catalog Chairman, 234 E. Broadway, Granville, OH 43023. For more details, visit the CS&CSS webpage.