More commemoratives for the centennial of Britain’s Royal Air Force 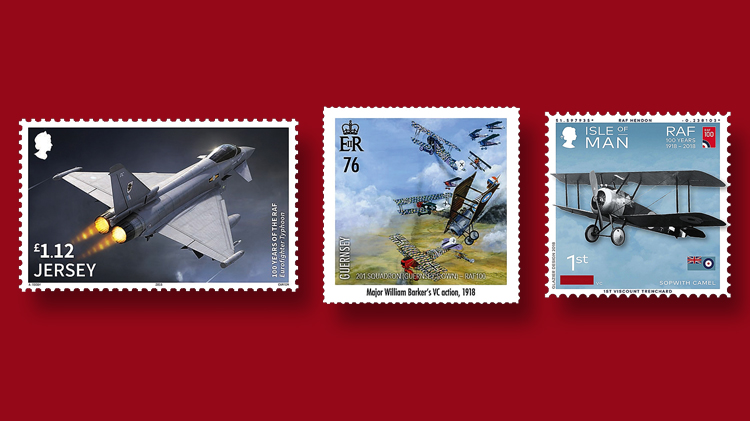 Jersey, Guernsey and the Isle of Man honor the 100th anniversary of the Royal Air Force on stamps.

Like Great Britain’s Royal Mail, the postal administrations of the Isle of Man, Jersey and Guernsey are recognizing the 100th anniversary of the Royal Air Force on stamps issued this year.

The Isle of Man Post was the first of the three issuing a set of eight stamps and a prestige booklet (with text, illustrations and stamps) on Jan. 15.

Not only do the stamp designs depict aircraft used by the RAF over the past 100 years, they are inscribed with additional information, including the GPS coordinates of a RAF airfield. Also when viewed under ultraviolet light, the sonnet High Flight by John Gillespie Magee appears in Morse code.

On March 31, Jersey Post is issuing six stamps, a souvenir sheet and a prestige booklet for the RAF’s centennial.

Chris Elligott of Jersey Post said: “The past 100 years have seen the RAF at the forefront of technical development and operational superiority. This issue illustrated by renowned aviation artist Adam Tooby features some of the landmark aircraft that populate the RAF’s history.”

Guernsey Post’s issue of April 3 honors both the RAF and the reformation of No. 201 Squadron.

The seven stamps, six in separate sheets of 10 and one in a souvenir sheet, picture the squadron in action in the two world wars, as well as peacetime.

Here are the bureaus websites: Isle of Man, Jersey and Guersey.