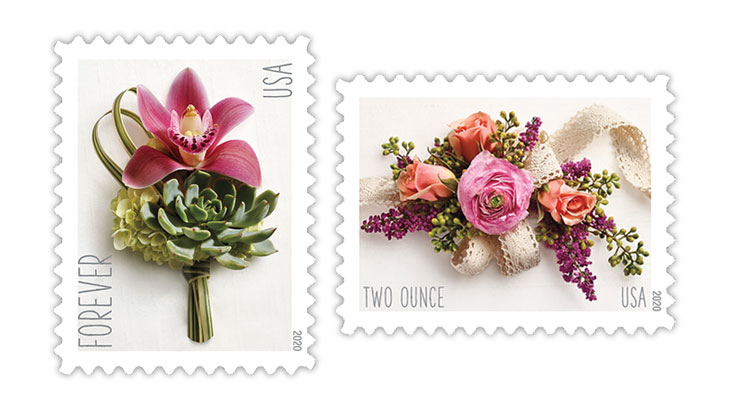 The first-day ceremony for the United States Contemporary Boutonniere and Garden Corsage forever stamps, originally scheduled for April 2 at the Yew Dell Botanical Gardens in Crestwood, Ky., has been delayed due to concerns over the coronavirus COVID-19

The coronavirus COVID-19 outbreak has prompted the delay of a second United States stamp ceremony.

Yew Dell Botanical Gardens in Crestwood, Ky., announced that it will be closed on April 2, the day the United States Postal Service planned to hold a first-day ceremony for two new stamps.

The gardens were to be the site for the issuance of the nondenominated (55¢) Contemporary Boutonniere forever stamp and the (70¢) Garden Corsage two-ounce rate stamp.

“Our staff members are working with the USPS folks to try and reschedule the event,” Paul E. Cappiello, executive director of the gardens, said in an e-mail to Linn’s.

“Not sure when that will be but I think all involved would like to postpone, rather than cancel,” he said.

It was the second stamp ceremony that the Postal Service has had to postpone because of the coronavirus.

On March 15 the Postal Service delayed a ceremony planned to mark the issuance of the Maine Statehood commemorative forever stamp.

The Maine Statehood stamp was officially issued on that day, and officials said the Postal Service would hold a stamp ceremony at a later date.

A USPS spokesman said the Contemporary Boutonniere  and Garden Corsage stamps will go on sale as planned on April 2.

Wedding planners and the stamp aftermarket