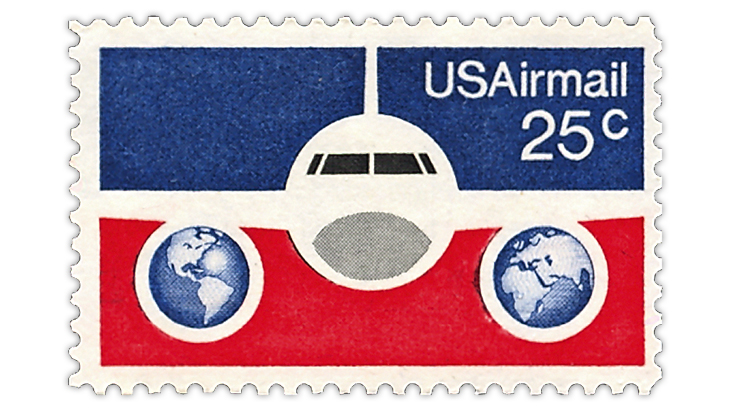 The United States 1976 25¢ Plane and Globes airmail stamp. Does the slowing down of first-class mail to surface-rate speeds pave the way for an airmail rate return?

Bill McAllister, in the Washington Postal Scene column in the Nov. 1 issue of Linn’s, reported that the “plan would lengthen delivery times for approximately 31.2 percent of first-class mail by one to two days.”

An email that I recently received from a collector got me thinking. The collector suggested that this might have just paved the way for airmail to take off again.

But let’s say the rate is $1.30 for a 1-ounce airmail letter (basically matching the global airmail rate). Would that be more palatable? I would have to think so.

I recognize there are some logistical challenges of sorting between surface and air, but it was somehow done before so I can’t see why it couldn’t happen again.

And on the collector side of things, I’m certain a number of us who collect airmail stamps would enjoy having something new to hunt down for our album pages that might even include interesting usages.