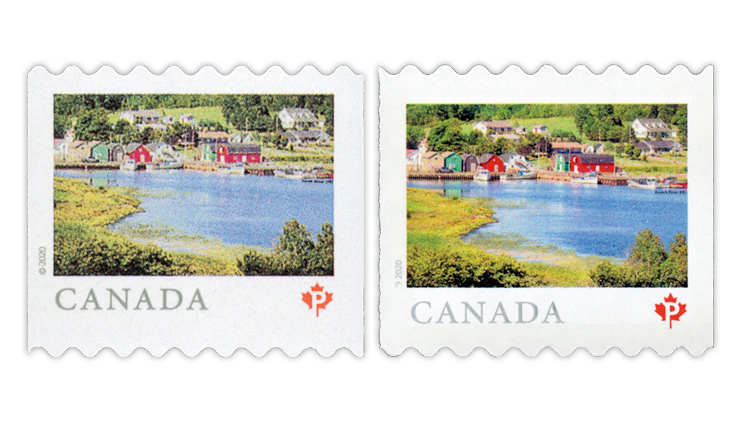 Well-executed counterfeits of Canada’s 2020 From Far and Wide coil stamps with horizontal gauge 8½ serpentine die cuts came to light in early March. Shown at left is a counterfeit of the stamp featuring the French River on Prince Edward Island. A genuine

The bogus stamps were first reported in a brief story in the March-April 2022 issue of the Corgi Times, the official newsletter of the Elizabethan II Study Group.

The fakes are believed to have been printed in China, according to the Corgi Times.

“Although the counterfeits do not have the characteristic underprinting, they do have the backprinting indicating the number of stamps left in the roll,” the Corgi Times reported.

Underprinting is a security feature added to the liner paper beneath the stamps.

A counterfeit 2020 From Far and Wide coil picturing the French River on Prince Edward Island, cropped from a strip of five, is illustrated at left. A genuine example of this stamp (Scott 3215) is shown at right.

Compared to the genuine stamp, the design details of the fake are noticeably grainy and much less distinct. The serpentine die cuts more closely match those on genuine stamps.

Linn’s Stamp News learned of these counterfeit stamps in late April from Robin Harris, editor of the Corgi Times.

“I heard about these [counterfeits] from a friend who heard about it from Richard Gratton back in early March,” Harris said. Gratton is a respected philatelic expertizer who specializes in errors, freaks, oddities, paper defects, counterfeits and forgeries.

Harris also said that one seller on eBay offered a strip of five counterfeit From Far and Wide coil stamps in an auction that ended April 21. The seller, whose eBay user name is paulberl, clearly offered the stamps as fakes.

“These stamps are being sold as fakes,” the seller said in the auction description. “They are not to be used for postage.” The fake strip sold for C$20, approximately US$15.50 in early May.

Harris said an article about the counterfeit From Far and Wide coil stamps will be published in an upcoming issue of the Canadian Philatelist, the official journal of the Royal Philatelic Society of Canada.