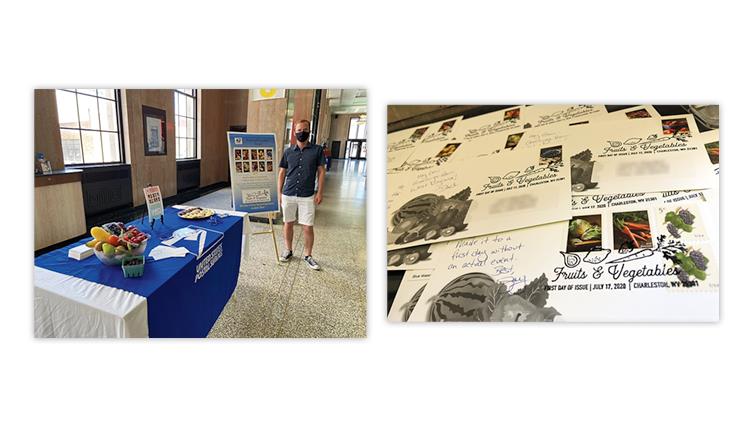 Linn’s Stamp News editor-in-chief Jay Bigalke in Charleston, W.Va., on July 17 for the first day of issue of the Fruits and Vegetables stamps. Also pictured is a stack of postcards that he sent to family and friends with the first-day cancellation. 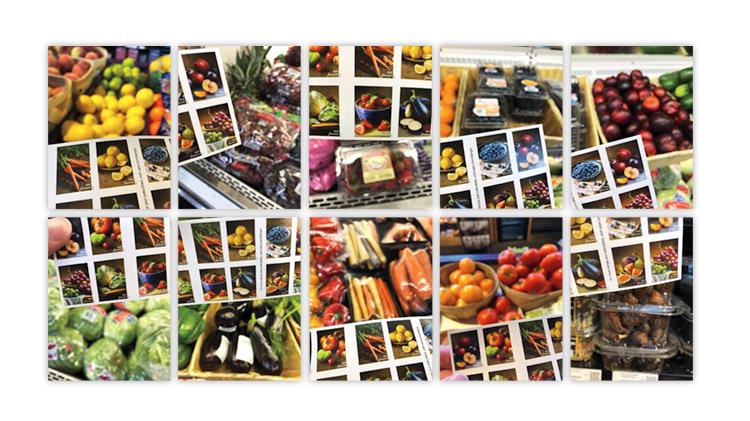 Charleston was selected as the first-day city because of its Capitol Market, a farmers market with a large selection of produce. After a visit to the post office, Bigalke walked around the market and was able to locate all 10 of the produce items shown on
Previous
Next

The first-day-of-issue experience has changed for the moment because of the COVID-19 pandemic. The Arnold Palmer forever stamp event on March 4 was the last formal first-day ceremony that took place in person.

That changed starting with the Fruits and Vegetables stamps issued July 17 in Charleston, W.Va. Because states are starting to lift restrictions and collectors are starting to venture out, the postmark device was sent to the city.

I live approximately three and a half hours from Charleston, so I decided to make the drive. As an avid first-day event attendee, I needed to experience one again as the last event I had attended was in October 2019.

The in-person event itself at the Capital Market in Charleston was canceled, but a virtual ceremony featuring two speakers was posted live at 11 a.m. on July 17. I thought it would be fun to “attend” the virtual event from the actual venue, and that’s what I did. A friend, Chris Lazaroff, also made the drive from his state of South Carolina.

Respecting local regulations, we both wore masks and remained socially distant from people.

After the virtual event, I headed to the main post office in Charleston. Local postal officials had decided to do something a little extra for the occasion. They set up a cancellation table decorated with fruits and had cookies available for customers.

I postmarked a number of items and sent them by mail to family and friends.

After acquiring the stamps, I returned to the market and thought it would be fun to try to locate all 10 produce items shown on the stamps. I was successful. Only one item wasn’t fresh; the figs were dried and in packages.

My thanks to the excellent team at the Charleston post office. They were very kind and accommodating. It was greatly appreciated.

Who knows what the future holds, but it looks like virtual ceremonies will be all collectors will have for the remainder of 2020. I would guess that the first-day postmarks will continue to be sent to cities for future events, but if you are planning on going, I recommend calling in advance to make certain.

Fruits and Vegetables stamps go to market with 10 designs