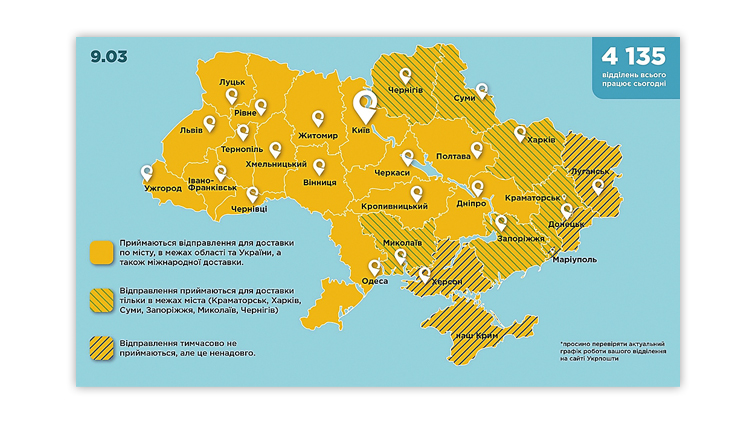 Ukraine’s postal service released this map image March 9 with a notice about its current operational status around the country. The postal service said that it is still possible to send a parcel around Ukraine or get a shipment from most regions of the co

Headlines around the world continue to discuss the current situation in Ukraine. On the philatelic front, an article about Ukraine’s post office running a stamp-design contest to send a message to Russia appears on page 1 of this issue.

Where there are political conflicts, war, interruptions and more, there is likely postal history that will come out of it.

Ukraine’s post office continues to update its website and Facebook page with information about its operations and stated on March 9 that most of its postal branches are open.

It also said that several countries have announced free delivery of items to Ukraine. The nations of Georgia, Slovenia and Romania and the territory of Gibraltar were among the places listed as offering free delivery.

Also on the philatelic side, there have been a number of direct effects of the Russian invasion. One of the two larger ones I have seen so far is the marketplace Delcampe suspending the accounts of Russian and
Belarusian sellers.

“Due to the conflict in Ukraine, which we deplore, we have decided to suspend all sales and purchases from Russia and Belarus,” the Delcampe team said in an email to users, adding that “Delcampe will do its utmost to protect the buyers and sellers of its community and will continue to apply all legal and compliance measures required by the authorities.”

And in a March 7 e-newsletter, the Federation of European Philatelic Associations announced, “The Board’s recommendation to its Members is that they should not permit participation from Russia and Belarus of any kind in their philatelic events for the foreseeable future.”