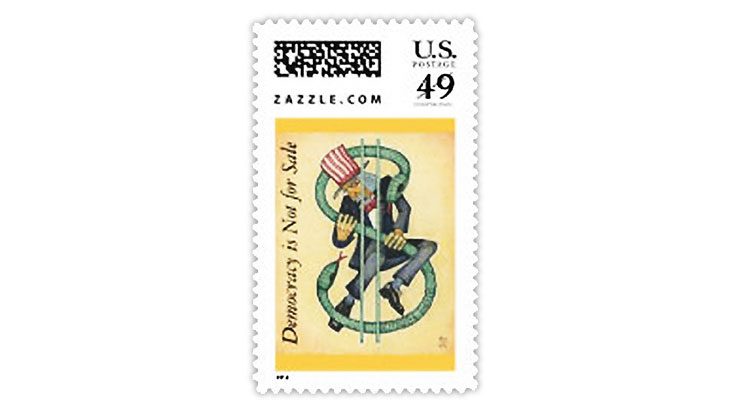 This rejected Zazzle stamp design, a political comment against the Supreme Court’s controversial 2010 Citizens United ruling, is at the center of a 2015 lawsuit that the stamp’s designer brought against the United States Postal Service.

As he was planning an exhibit for a Washington, D.C., gallery, Zukerman decided some computer-generated stamp designs would be the ideal way to promote this art.

But Zazzle Inc., the California company that first offered to print 20 such stamps for $40, had second thoughts.

The 81-year-old emigrant from the former Soviet Union said his designs were judged “too political” for the U.S. Postal Service to allow.

After a prolonged court fight, a federal judge has agreed, ruling this spring that the USPS has the right to dictate what can be placed on personal postage.

“We thought it was unfair, a mistake,” Zukerman told Linn’s in a telephone interview.

He and his lawyers were shocked by the ruling and are planning an appeal, he said.

Stamp art should be a freedom of speech issue, protected by the First Amendment, they say.

U.S. District Judge Christopher R. Cooper, however, sided with the Postal Service, declaring that the agency had a right to limit what goes on personalized stamps that customers create on their computers.

In a 32-page ruling on April 26, Cooper noted that while Zukerman’s lawsuit was pending, the Postal Service had issued new rules that tightened its ban on political stamps.

“The regulations simply ban all political content without exception,” the judge said.

Earlier guidelines “by contrast appear to have allowed for some political content so long as it was neutral,” he said.

That may have been Cooper’s way of explaining how a number of 2016 presidential candidates had managed to devise customized stamps for their mailings without opposition from the Postal Service.

Among those who used the stamps in their political campaigns were Republicans Ted Cruz and Jeb Bush, and Democrats Bernie Sanders and Hillary Clinton.

Cooper rejected suggestions that he should declare those stamps invalid.

“The court declines to find that USPS is required to completely eradicate every trace of private speech when closing a forum,” he said.

“USPS was well entitled to tighten its control over the customized postage program and transition the program from a public to a nonpublic forum,” Cooper said, rejecting Zukerman’s challenge to the new rules.

The judge based his ruling on the Postal Service’s position that it “must limit eligible private content to protect its own business and brand interest against dilution, false attribution, appearances of endorsement and other potential impacts.”

The USPS was fearful that even though the stamps were not designed by the Postal Service, some people might believe they were.

“As USPS points out, plaintiffs could instead print postcards or envelopes with the proposed design that would not pose the same risks of misattribution and entanglement,” he said.

One point infuriated Zukerman: The judge failed to define “what political content is.”

The artist noted in a flyer on the case that the Postal Service “is not forbidden from religious images” on its stamps, but it “prohibits all religious expressions on [customized] postal stamps.”

“Does this make sense to anyone?” Zukerman asked.

It was not a party to the lawsuit, which Zukerman filed in 2015 with Charles Krause Reporting LLC, the owner of a gallery that displays political art.

The design that Zazzle rejected featured an image of Uncle Sam struggling with a snake that formed a dollar sign entrapping the man who is a symbol of America.

The design was a protest against a 2010 Supreme Court ruling in the Citizens United case, which removed restrictions on corporations and unions providing financial support to political campaigns.

“Democracy is Not for Sale,” the inscription on Zukerman’s proposed stamp reads.