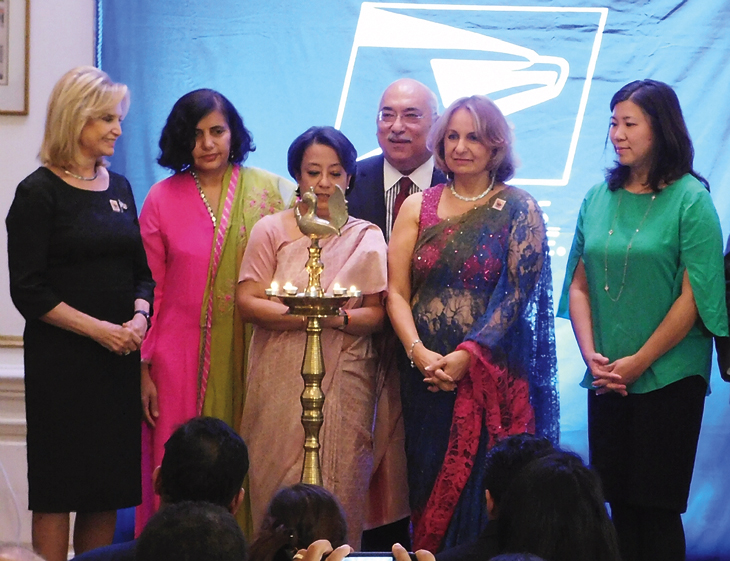 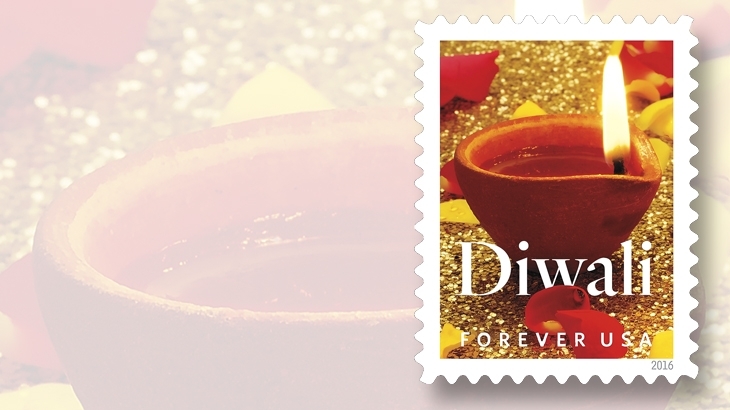 The Diwali forever stamp was welcomed with a well-attended Oct. 5 first-day ceremony at the Consulate General of India in New York City.

Audience cameras capture the moment as the ceremony participants unveil the design of the Diwali forever stamp at the Oct. 5 ceremony at the Consulate General of India in New York City.
Previous
Next

The themes of gratitude and celebration were fully and deeply expressed by everyone who participated in the Oct. 5 first-day ceremony for the United States forever stamp for the Diwali holiday.

The 80-minute ceremony at the Consulate General of India in New York City was in every way a celebration of the new stamp, which has been requested for many years by members of the Indian community in the United States.

Expressions of gratitude were abundant, often directed at U.S. Postmaster General Megan Brennan for approving the new stamp, and to U.S. Congresswoman Carolyn B. Maloney of New York’s 12th Congressional District, who worked alongside the Indian community in New York City to achieve the goal of issuing a U.S. Diwali postage stamp.

The master of ceremonies was Ravi Batra, chair of the National Advisory Council for South Asian Affairs. However, it was his wife, Ranju Batra, who was one of the day’s biggest celebrities, as chair of the Diwali Stamp Project and a driving force behind the project’s eventual success.

All of the dignitaries appeared together as Ambassador Das led the ceremonial lighting of the diyas, the lamp closely associated with the Diwali celebration, which is represented in its traditional form on the stamp design in a photograph by Sally Andersen-Bruce, who was also present at the lavish ceremony.

Along with the often moving comments by the participants, the capacity crowd also enjoyed a delightful dance performance by members of Shaan Mutiyaaran Di Bhangra Club.

Mrs. Batra spoke about the long process of working to win approval for a stamp to mark the holiday, which is celebrated worldwide by Hindus, Jains, Buddhists, and Sikhs.

“For 1.3 billion Indians in India, for about 4 million Indian-Americans, and for many more around the world, the festival of light is here,” she announced.

Congresswoman Maloney echoed Mrs. Batra’s comments when she referred to the new stamp as “a dream come true,” and told the crowd “we’ve sold over 100,000 stamps already!”

The stamp marks the bringing together of the friendship of two great democracies, Maloney observed: “The world’s largest democracy, and the world’s oldest democracy.”

The celebration continued into the afternoon with the unveiling of the Diwali stamp design, and a gracious invitation to all who attended to enjoy food and beverages after the event.