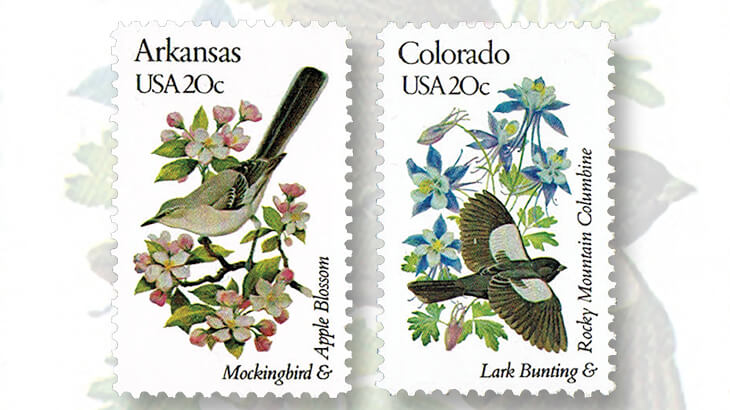 Stamps from the 1982 State Birds and Flowers issue have an unusual and confusing feature that isn’t evident until a collector turns them over.

I am surprised by some of the letters generated by this series of columns on expertizing.

“I may or may not be having a problem with a well-known dealer, and I was hoping I could get some guidance from you before I trigger any trip-wires. I recently purchased the referenced 50-stamp set, all in mint-never hinged condition.

“They look great in my album, however, in placing them I noted that NONE of them have gum on the reverse. There is no evidence of them being previously soaked, but there is no gum.

“Scott does not list any variation without gum and I was hoping you could shed some light on this. I don’t want to accuse the dealer of unethical practices because of my own ignorance. Any thoughts you could share?”

At the time the State Birds and Flowers stamps were issued, quite a number of U.S. stamps, but primarily definitives, were being printed on pregummed paper with so-called “dry”or “dull” gum. No question that it takes a practiced eye to tell that the gum is present and undisturbed, so it is understandable that the letter writer was puzzled.

I checked the Scott Specialized Catalogue of United States Stamps and Covers, but it was not helpful on this point. Neither in the introductory material nor anywhere near the Birds and Flowers set was there a discussion of when the new gum was first used, or how extensively.

For that reason, I passed a copy of the letter on to Jim Kloetzel, who in retirement is still involved in production of the Scott U.S. Specialized catalog, with the title editor emeritus. After looking at the problem, he agreed that some sort of notice should be taken of the dull gum phenomenon to make the catalog more helpful to users. So look for that in a future update.