Easter seals were introduced in 1934 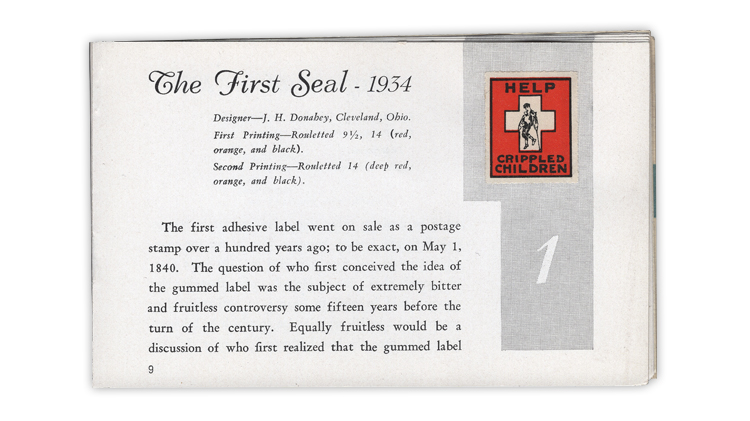 The first Easter seal was issued in 1934. A page from a 1944 pamphlet titled “Story of the Easter Seal” shows an example of that seal.

Equity suggests that the Scott Specialized Catalogue of United States Stamps and Covers should treat national Easter seals the same way it treats national Christmas seals. And it has listed Christmas seals for many years.

Christmas seals were introduced in the United States in 1907; Easter seals did not begin until 1934.

The Easter seal program was modeled on the annual Christmas seal campaign, and these seals were introduced for a similar reason: to raise funds to combat dreaded diseases that caused the crippling of children and to serve handicapped youth.

Shown here is a page from a 1944 pamphlet with an image of the first Easter seal. Thanks to Linn’s reader Mike Pappas of Plymouth, Mich., for providing this pamphlet titled, “Story of the Easter Seal.”

The 1934 Easter seal was designed by J.H. Donahey, the cartoonist for the Cleveland Plain Dealer, for the National Society for Crippled Children. (The organization formally adopted the name Easter Seals in 1967; later called Easterseals).

Like Christmas seals, the first Easter seals were sold at a suggested donation of a penny per seal. A total of 22 million seals were sold in 1934, and the actual receipts were $47,000.

By 1944, the year the pamphlet was published, the annual Easter seal distribution had reached half a billion per year. And the most recent figure I have is that the seals raised $13 million for the last year for which accounting is complete and according to information on the Easterseals website.

Easter seals have never had the reach or the popularity among stamp collectors that Christmas seals have achieved, but they still exist.

The listing of Easter seals in the Scott U.S. Specialized catalog could only help to further popularize this field, but it might not do much for catalog sales.

In the meantime, the best resource for Easter seal collectors is the Christmas Seal and Charity Stamp Society, which publishes an exceptional full-color quarterly journal, Seal News, and includes an auction with every issue.

To learn more about the society, visit its website. Membership is $20 a year including printed issues of Seal News. To receive the journal in electronic form only, membership is $12.50. The membership chair is Paul Clemmensen, 3879 Forester Court, San Jose, CA 95121. He can be reached by email.

Vatican is sued over artwork on 2020 Easter stamp