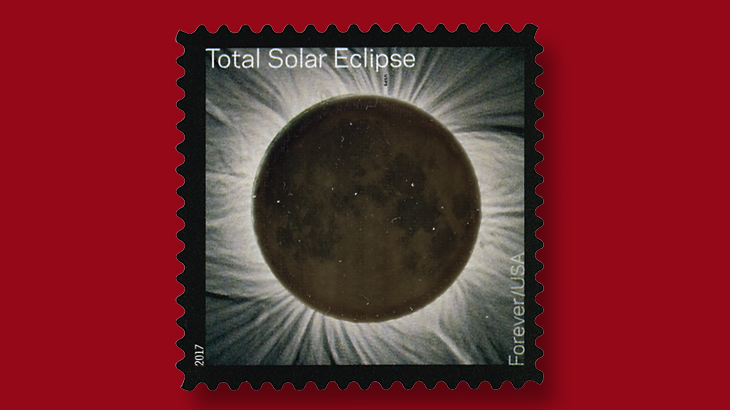 The choice of Linn’s readers for the overall favorite United States stamp of 2017 was the Total Solar Eclipse forever stamp, which received twice as many votes as any other stamp in the 2017 Linn’s U.S. Stamp Popularity Poll. 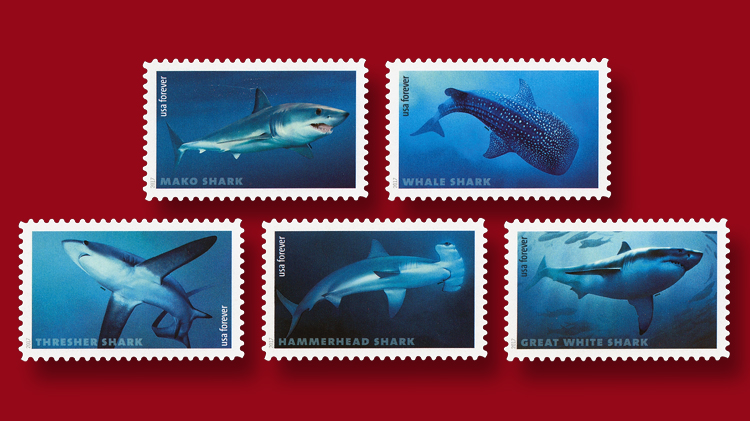 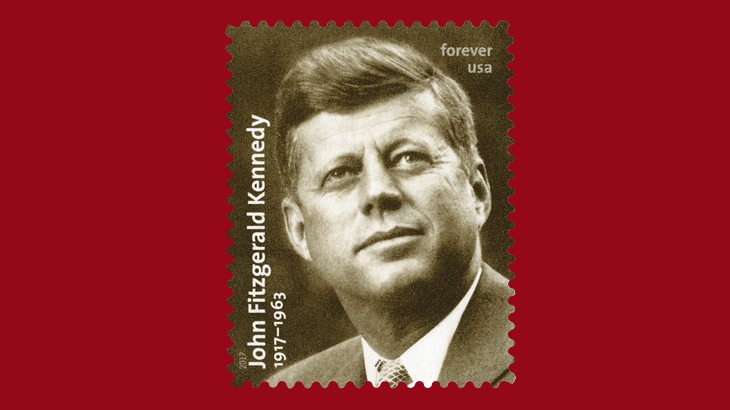 The forever stamp marking the 2017 birth centenary of President John F. Kennedy was chosen by Linn’s readers as the most important commemorative stamp issued last year.
Previous
Next

You might say that it was a stamp destined to eclipse all others.

The results of the 2017 Linn’s United States Stamp Popularity Poll have been tabulated, and voters gave a decisive win to the Total Solar Eclipse forever stamp as the overall favorite stamp of the year.

The square stamp was issued June 20, 2017, to commemorate the total solar eclipse that would be viewed by Americans from coast to coast two months later on Aug. 21.

An unusual aspect of the stamp is a perfectly round coating of black thermocromic ink in the center that disappears when warmed by human touch or another source, revealing an image of the Earth’s moon.

The stamp was printed and processed by U.S. Postal Service contract printer Banknote Corporation of America and issued in a pane of 16.

The Total Solar Eclipse stamp received 395 votes as the overall favorite stamp of 2017, more than twice the 192 votes earned by the second-place finisher, the WPA (Works Progress Administration) Posters set of 10 issued March 7, 2017.

Like the Total Solar Eclipse stamp, the Sports Balls set was issued in a pane of 16, and included an unusual production element. In the case of the Sports Balls stamps, a textured coating on each stamp mimics the texture of the ball represented in the illustration.

Readers of all ages mailed in a total of 1,631 ballots to vote in the stamp poll, an increase of more than 11 percent over last year’s mail-in ballot total of 1,462.

More than 700 online voters participated via Linns.com as well. The votes from online and mail-in ballots were combined to calculate this year’s winners.

Votes were accepted from mid-December 2017 through March 1, 2018. The ballot was published weekly in Linn’s during the voting period.

The tables provided with this article list the poll results for the overall favorite, and for three specific categories: commemorative stamps, definitive and special stamps (combined), and postal stationery.

Within each of the three categories, voters could select the stamps or issues they felt had the best design and worst design, and those that they considered the most important and least necessary.

A separate section on the ballot was reserved for the voter’s overall favorite 2017 stamp.

Linn’s encourages younger readers to vote and to mark their ballots to let Linn’s editors know that it represents a youth vote.

This year saw 208 ballots marked as being submitted by a younger collector, a decrease from the total of 262 in last year’s voting, but nearly matching the 204 votes from youngsters in the 2015 stamp poll.

The youth votes are compiled and combined with all the other votes, but they are also examined as a separate group to get a sense of the recent stamps that appeal to younger collectors.

This year, youngsters picked the Sharks set of five forever commemorative stamps as their favorite, but the tally at the top was close, with 26 votes for the Sharks, compared to 22 for the second-place finisher, the Disney Villains set of 10, and 20 votes for third place, the Sports Balls set.

The same three sets took the top three positions, in the same order, in the category for commemorative best design.

In an unusual twist, youngsters also voted the Disney Villains stamp as the worst design and the least necessary, a classic example of either you love them or you hate them, it seems.

The forever stamp for John F. Kennedy was named as the most important commemorative stamp of 2017 by younger voters, with 65 votes. Second place, with 29 votes, went to the Protect Pollinators set of five stamps showing various flowers with butterflies and bees.

The Seashells set of four stamps for the postcard rate was chosen by youngsters as the best designed definitive stamp.

In general voting, the Total Solar Eclipse stamp won a second time as the readers’ choice for best designed commemorative stamp. The victory was again by a substantial margin.

An unusual 11-stamp set paying tribute to fashion designer Oscar de la Renta was issued Feb. 16, 2017, with 10 stamps showing elements of his dress designs, and one with a black-and-white photograph of de la Renta.

Despite the innovative production, the Oscar de la Renta commemorative set was voted as the worst design in that category.

The WPA Posters set and a single forever stamp for the recently opened National Museum of African American History rounded out the top five as the most important commemoratives.

Voting for the best design among definitive and special stamps was close for the two top contenders, two stamps that were illustrated by the same artist and issued on the same day.

Both stamps were issued Jan. 22, 2017, and feature illustrations by Dan Cosgrove, who has created the artwork for all of the stamps issued so far in the American Landmarks series of high-denomination definitives.

The third highest vote count for best definitive design (279) went to the Flowers from the Garden set of four designs in eight varieties.

The stamp selected as having the worst design for a 2017 definitive was the Uncle Sam’s Hat additional ounce stamp. The nondenominated stamp was issued in a pane of 20 on Feb. 18, 2017.

The last U.S. stamp issued in 2017 arrived on Nov. 30 — the first all-new U.S. semipostal stamp to be issued in more than six years.

Collecting a surtax for the benefit of Alzheimer’s research, the stamp struck a nerve with Linn’s readers, and earned more votes in any category that any other stamp, earning the top position as most important definitive with 1,214 votes.

Second place as most important went to the U.S. Flag forever definitive, with 297 votes. A 2-ounce rate stamp honoring Robert Panara, a leader in the field of deaf education, was voted as the third most important, with 142 votes.

The least necessary definitive stamp, according to Linn’s readers, was the Delicioso set of six stamp issued April 20, 2017, in a double-sided pane of 20. Each stamp features a different Latin American food.

Voters had four postal stationery items to choose from in the 2017 poll, although one issue, the Northern Cardinal forever stamped envelope, was technically placed on sale late in 2016. However, its existence wasn’t even reported until 2017 since the Postal Service didn’t make an announcement when the envelope was first issued.

Voters are always welcome to include additional comments with their ballots, and a few readers participating in this year’s poll chose to do so.

Steve Maginnis selected the Andrew Wyeth set of 12 different stamps as having the best commemorative design.

“Andrew Wyeth was an artist with great subtlety and a knack for understatement, so it’s only natural that his paintings surpass any original stamp design for 2017,” Maginnis wrote.

The Wyeth stamps were popular with many readers and scored fifth in the best design category.

Dana Middleton, on the other hand, told Linn’s he wasn’t pleased with either the Wyeth stamps or the Total Solar Eclipse stamp.

Russell Fowler sent a note that was short but to the point: “As a collector for almost 50 years, I enjoyed all 2017 commemoratives and could not pick worst design. Definitives were another story.”

Ruth Sadler was pleased with the Love Skywriting forever special stamp, issued Jan. 7, 2017, adding that it was nice to see another light-hearted Love stamp.

Maris Tirums had a positive view of the Oscar de la Renta stamps, choosing them as the best designed commemorative.

“While the subject is of marginal significance, the stamps were clearly the best designed and executed issue of the year!” Tirums wrote.

THANKS TO ALL PARTICIPANTS

Voting in Linn’s U.S. Stamp Popularity Poll for 2018 is scheduled to begin in December.