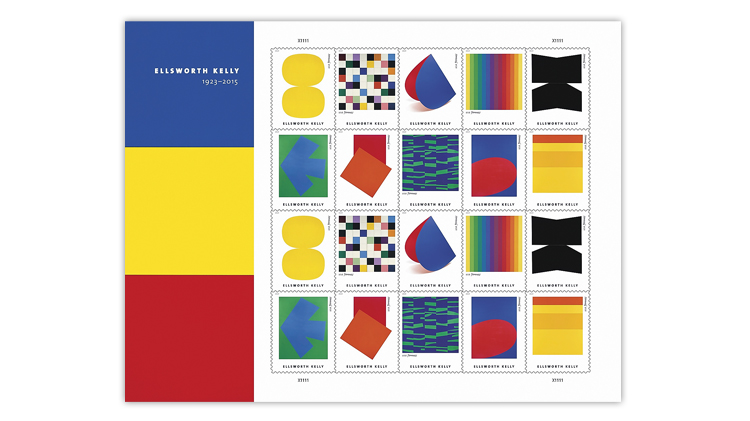 The set of 10 United States Ellsworth Kelly commemorative forever stamps will be issued May 31 in a pane of 20. The first-day ceremony will take place at Kelly’s studio in Spencertown, N.Y. 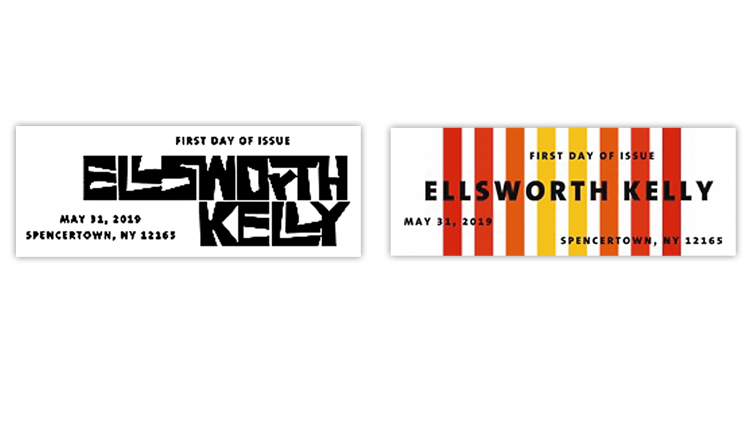 The United States Postal Service prepared two first-day cancels for the Ellsworth Kelly commemorative stamp issue, one in black and the other in color. Both postmarks highlight the artist’s name.
Previous
Next

The United States Postal Service has captured and conveyed the paintings of Ellsworth Kelly in 10 identically sized vertical postage stamps to be issued May 31 in a pane of 20.

The effort represents some of the brightly colored abstract works for which Kelly is perhaps best known. The paintings depicted on these 10 nondenominated (55¢) forever stamps range chronologically from 1951 to 1990, a 40-year glimpse of a career that the Postal Service notes spanned “some 70 years.”

The first-day ceremony will begin at 11 a.m. May 31 at the Ellsworth Kelly studio in Spencertown, N.Y., a hamlet in eastern Columbia County.

The ceremony participants will include USPS vice president of marketing Steven W. Monteith, and Jack Shear of the Ellsworth Kelly Foundation.

The Postal Service suggests that anyone wishing to attend should register online at www.usps.com/ellsworthkelly.

“In painting shapes — like a tennis court, a smokestack on a tugboat, or the roof of a barn — as flat planes of color, Kelly removed their dimensionality and turned reality into abstraction. He was also one of the first artists to create shaped canvases and to integrate art with modern architecture, taking great care about the size of a painting, its boundaries, and its placement in relation to the walls and floor.”

Ellsworth Maurice Kelly was born May 31, 1923, in Newburgh, N.Y. He studied at the Pratt Institute in Brooklyn before serving in the U.S. Army’s 603rd Camouflage Engineer Battalion, part of the 23rd Headquarters Special Troops.

The so-called “Ghost Army” engaged artists and engineers in Europe during World War II to develop visual and other sensory deceptions to deflect the approaching enemy.

After the war, Kelly studied drawing and painting at the Boston Museum School, but returned to Europe to work in France for several years. His first solo exhibition was at a Paris gallery in 1951.

“When he returned to the United States in 1954, his hard-edged, nonpainterly works were quite distinct from the mainstream of American abstraction, which was then dependent upon expressionism,” according to the National Gallery of Art.

“Using spare shapes and sensuous colors, Ellsworth Kelly finds the essence of his art in natural forms, but the abstract clarity and solidity of his minimal works also have their own aesthetic presence.”

Kelly moved to upstate New York in 1970 and worked in his Spencertown studio until his death on Dec. 27, 2015.

In 1993 Kelly received the Chevalier de la Legion d’Honneur from the French government. He also received the 2012 National Medal of Arts from President Barack Obama.

The citation for the U.S. award described that it was bestowed “For his contributions as a painter, sculptor and printmaker. A careful observer of form, color and the natural world, Mr. Kelly has shaped more than half a century of abstraction and remains a vital influence in American art.”

Two different pictorial postmarks have been created to welcome the new stamps, both prominently featuring the artist’s name in black letters.

The background of the color postmark includes vertical bars of solid color ranging from red to yellow, somewhat reminiscent of Kelly’s abstract works.