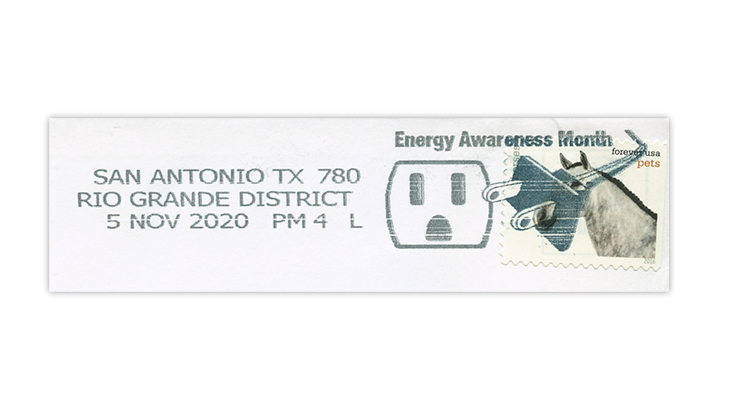 The plug shown in the Energy Awareness Month postmark landed right on the horse’s nose on this stamp from the 2016 Pets issue.

I have harped on this many times before, and so have many Linn’s readers, but it bears repeating: These cancellations with heavy designs destroy the stamps used on the envelopes.

But that’s not my main reason for writing about this postmark in particular. Depending on the stamp used and its placement on the envelope, the Energy Awareness Month cancellation has lent itself to some hilarious results.

In the example shown here, the cancellation is on a United States Horse forever stamp (Scott 5123) from the Pets stamp issue of 2016.

The plug part of the cancel is coming out of the horse’s nose. One could probably make a joke about horsepower, too.

The size of the outlet on the postmark and its resemblance to a ghost’s face was also noticeable. One cover I received was postmarked Oct. 31, Halloween, and franked with one of the Spooky Silhouettes forever stamps from 2019. A great combination, and I thank the Upper Valley Stamp Club of Quechee, Vt., for sending that cover to me.

I am sure other readers have examples to share. You can send scanned images to me at jbigalke@amosmedia.com, and other types of images to me at Box 4129, Sidney, OH 45365. We might be able to picture a few of the best in a future Letters to Linn’s column.