Engraving on a first-class stamp in 2015; unveiling of next year’s stamp program begins 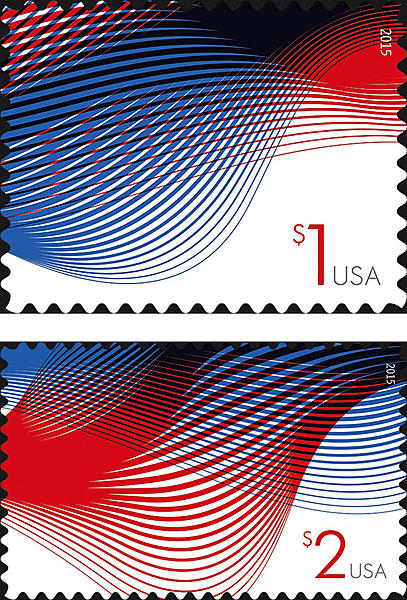 These two high-denomination Patriotic Waves stamps for 2015 are designed to look like abstract “billowing flags,” according to the United States Postal Service. 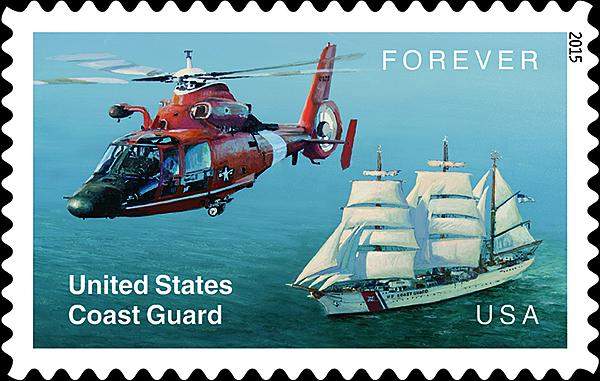 A new forever stamp commemorating the United States Coast Guard will be issued in 2015. 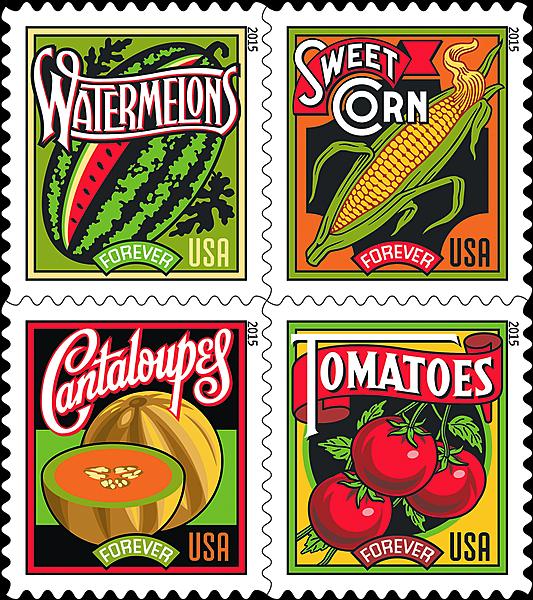 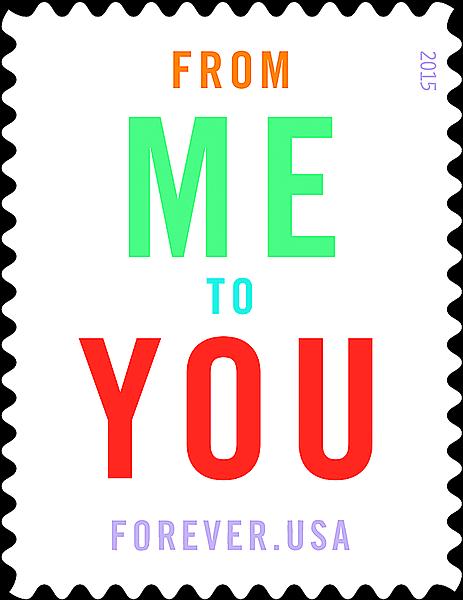 A forever stamp titled From Me To You will be offered in conjunction with National Card and Letter Writing Month, celebrated in April. The pane of 20 stamps includes selvage designs that can be used to decorate mailed envelopes. The cut-to-shape labels in the header bear different messages, including “Thank You,” “Happy Birthday” and “Congrats.” 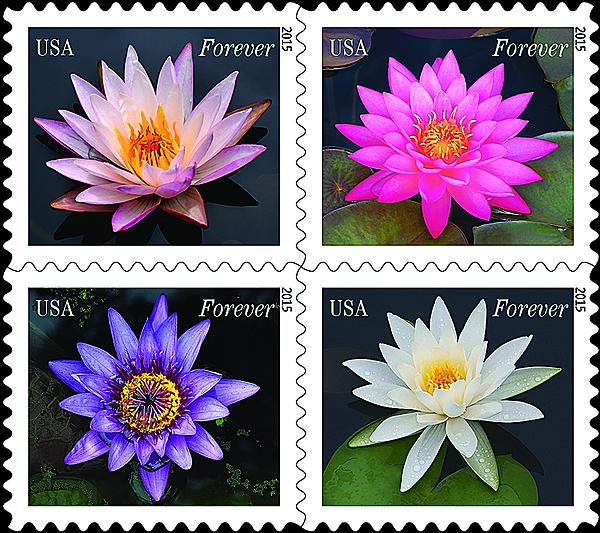 Water lilies will be featured on four U.S. definitive forever stamps in 2015. 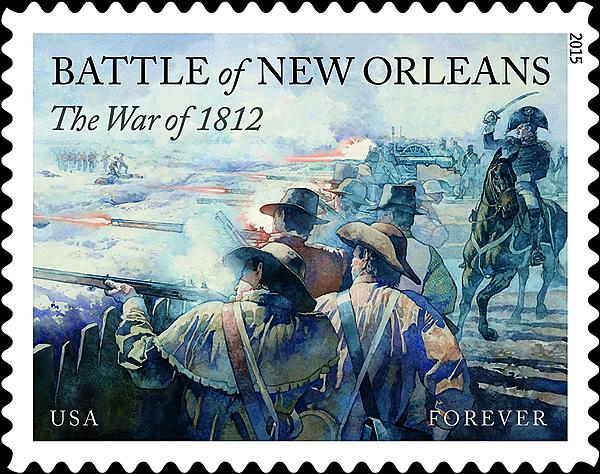 The final stamp in the U.S. War of 1812 series will commemorate the 1815 Battle of New Orleans. It is expected to be issued in New Orleans around the Jan. 8 anniversary date. 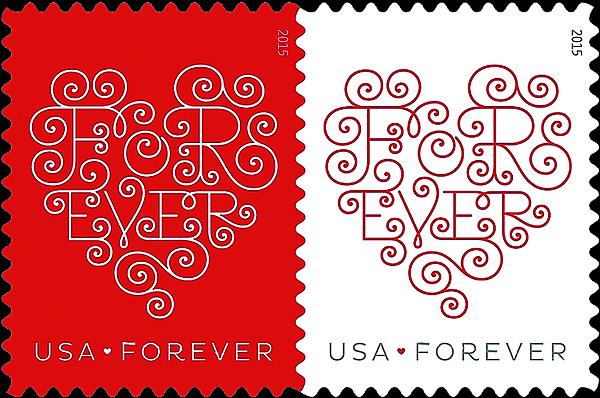 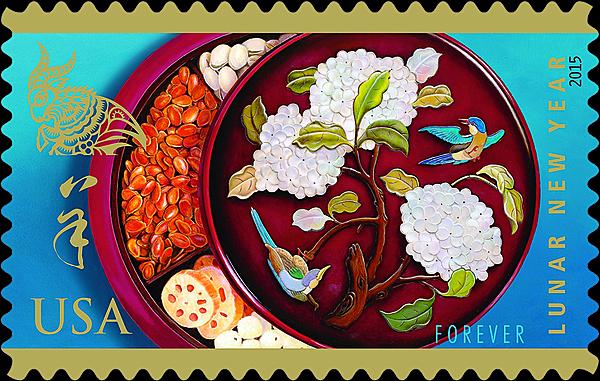 The United States Postal Service will issue a Vintage Tulip forever stamp and a 70¢ Vintage Rose stamp in 2015. These Wedding series stamps will have engraved designs, according to USPS officials.

Engraved designs will return to United States first-class letter-rate stamps next year, the upcoming World Stamp Show-NY 2016 will be the subject of a new stamp, and another stamp will encourage the writing (and mailing) of letters.

Details of these and selected other issues from the U.S. stamp program for 2015 were revealed by acting U.S. Postal Service stamp services acting director Cindy Tackett during an online meeting with reporters Nov. 4.

Tackett unveiled the designs for the following forever stamps: a New Year series issue for the Year of the Ram, a Battle of New Orleans stamp concluding the War of 1812 series, four Water Lilies stamps, a pair of new Love stamps, the letter-writing issue titled From Me To You, four Summer Harvest stamps resembling produce crate labels, and a U.S. Coast Guard centennial stamp.

Also shown was a set of two engraved Vintage Flowers stamps with a rose design on a forever stamp and a tulip design on a second-ounce rate stamp.

The designs of new $1 and $2 stamps called Patriotic Waves (closely resembling the 2012 Waves of Color definitives) were also revealed.

Specific issue dates were not provided for most of the announced stamps.

A stamp issue promoting World Stamp Show-NY 2016 will debut during the American Philatelic Society’s Stampshow, Aug. 20 in Grand Rapids, Mich. Design details were unavailable, but plans call for a design “with the collector in mind,” according to the Postal Service.

Stamps were confirmed for the Civil War 1865 issue, but those designs also were not revealed. The two commemorative forever stamps will conclude the five-year series. One stamp will show the Battle of Five Forks on April 1, 1865, and the other will commemorate Gen. Robert E. Lee’s surrender at Appomattox on April 9, 1865.

The stamps will use the same double-sided pane format as previous issues in the series, with two stamps on one side and 10 on the other.

Also in 2015, the Postal Service is planning two stamps in the ongoing Music Icons series, one Legends of Hollywood stamp, one Black Heritage stamp, and one stamp honoring a “notable African American.”

Three stamps honoring Medal of Honor recipients from the Vietnam War will be issued in 2015, presumably in the same format of a folded pane (described by the Postal Service as a prestige folio) as the 2013 Medal of Honor issue for World War II recipients, and the 2014 issue for Korean War recipients.

Because the new issue will include a stamp for the Air Force Medal of Honor introduced in 1965, it is expected the number of stamps in the folded pane will change from 20 to a quantity that can be evenly divided by three.

The two stamps with engraved designs are the latest Wedding series issues, with a Vintage Rose forever stamp for reply envelopes, and a Vintage Tulip second-ounce rate stamp (shown as 70¢ in preliminary artwork) for heavier invitation envelopes.

The Wedding stamps will be issued in two separate panes of 20. Artist Jeanne Greco created the designs for the stamps that show each flower in black. A red heart appears in the corner of each stamp. The flower artwork is based on details from two early 1700s engraved plates.

The design of the Lunar New Year forever stamp for the Year of the Ram uses a painting of a wooden candy tray known as a chuen-hop, or tray of togetherness, with a bright blue background. The stamp continues the current New Year series illustrated by Kam Mak, and is scheduled for January.

Two new Love stamps, titled Forever Hearts by the Postal Service, feature heart designs that incorporate the word forever in the design. One of the stamps has the heart pattern in red against a white background, while the other matches with the colors reversed: a white design on a red background.

The Forever Hearts special forever stamps will be issued in January as a pane of 20. Because of the full bleed design of the red stamp, the pane will have selvage strips between the individual stamps.

The stamp illustration was created by Jessica Hische.

The fourth and final stamp in the series commemorating the War of 1812 bicentennial will be issued near the Battle of New Orleans anniversary date of Jan. 8. The exact date was not revealed, but the stamp will debut in New Orleans.

The single forever stamp shows a battle scene with American and British soldiers, including Gen. Andrew Jackson on horseback. The artwork was created by Greg Harlin specifically for this stamp.

The four Water Lilies forever stamps feature photographs of different lilies colored light pink, pink, purple and white. The stamps are planned as a double-sided pane of 20 (convertible booklet format). The photographs were taken by Cindy Dyer at the Kenilworth Park and Aquatic Gardens in Washington, D.C.

In an effort to promote National Card and Letter Writing Month, the Postal Service will issue a forever stamp in April titled From Me To You. The single forever stamp simply depicts that four-word phrase, along with the country name and forever denomination.

The From Me To You stamp pane includes decorative artwork in the selvage of all four sides, with pictorial elements that can be used as decorations or small message labels on envelopes.

The large pane header includes 11 cut-to-shape labels conveying messages such as “Hello,” “Thank You,” “Get Well Soon,” “Happy Birthday,” “Miss You,” “With Love” and “Congrats.”

Four Summer Harvest definitive forever stamps will be issued in June, in a double-sided pane of 20 (convertible booklet format). The stamp designs are reminiscent of advertising artwork used on the sides of fruit crates.

The concept for these four stamps dates back to the 1980s, when former USPS art director Richard Sheaff commissioned Doret to create a series of concept sketches featuring fruits and vegetables.

In August, two anniversaries for the U.S. Coast Guard will be remembered with a single commemorative forever stamp. The design shows an oil painting by artist William S. Phillips of the Coast Guard Cutter Eagle with an MH-65 Dolphin helicopter flying above.

According to the USCG historian’s office, in 1790 Congress authorized the Secretary of the Treasury, Alexander Hamilton, to create a maritime service to enforce customs laws, alternately known as the system of cutters, Revenue Service and Revenue-Marine.

President Woodrow Wilson signed the Act to Create the Coast Guard on Jan. 28, 1915.

Two high-denomination Patriotic Waves stamps, designed to look like abstract “billowing flags,” according to the Postal Service, will be issued in 2015. The single $1 and $2 stamps will be issued in panes of 10, with the $1 stamp at special stamp size, and the $2 stamp at commemorative stamp size.

The stamps are similar in style to the Waves of Color high-denomination stamps issued in 2012. Artist Michael Dyer created the images for the two new stamps, as well as the previous set of four stamps.

Tackett told Linn’s that the issue date of the Patriotic Waves stamps will depend on the number of $1 and $2 Waves of Color stamps remaining in stock at the Postal Service’s Stamp Fulfillment Services facility.

Postal Service officials added that additional details about the 2015 stamp program will be revealed on an ongoing basis as soon as each stamp design has been finalized.