Espresso drink fans get four U.S. stamps for their favorites 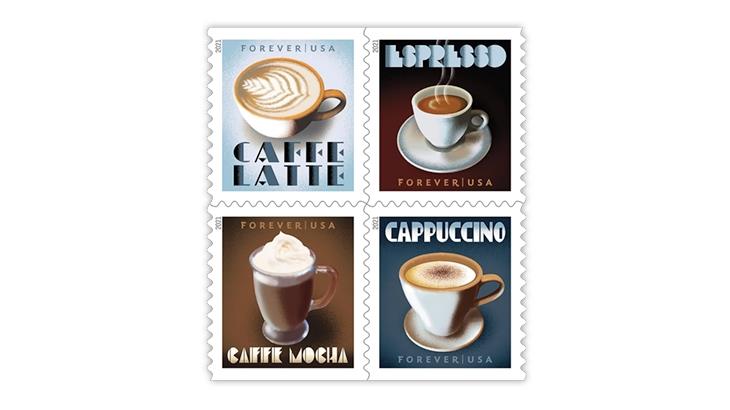 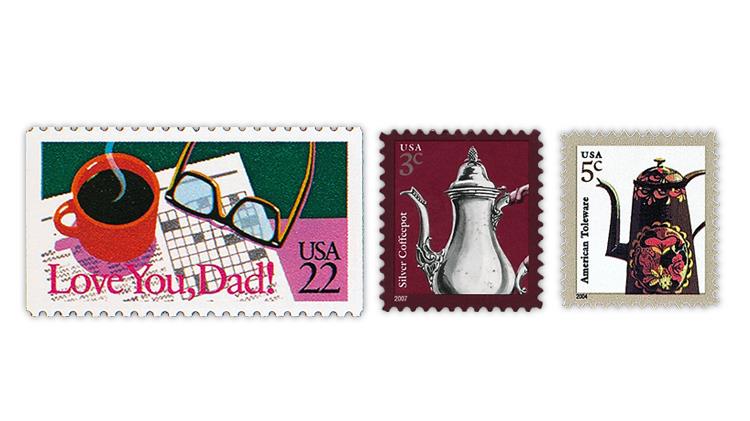 Only a few United States stamps have paid tribute to the appeal of coffee drinks, including the 22¢ Love You, Dad! stamp from a 1987 booklet, and the 3¢ and 5¢ stamps issued in the 2002-14 American Design definitive series. 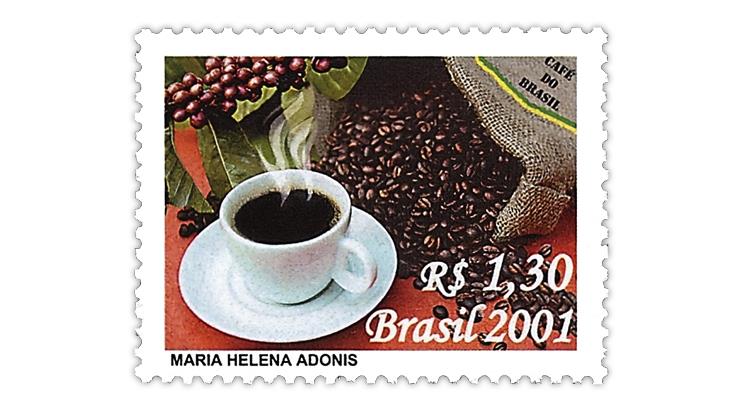 Brazil issued a 1.30-reis commemorative stamp in 2001 that shows an open bag of coffee beans and a cup of prepared hot coffee. The stamp also has a coffee scent. 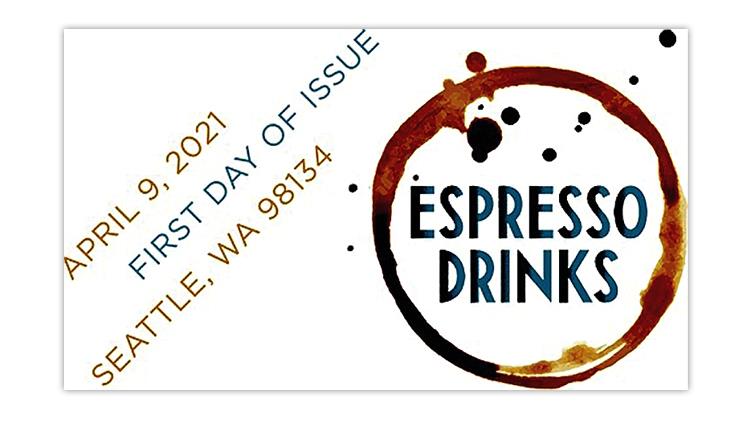 The nondenominated (55¢) stamps will be issued in a double-sided pane of 20, which the U.S. Postal Service describes as a booklet.

The beverages, each depicted in a single cup or glass mug against a solid color or gradient background, are caffe latte, espresso, caffe mocha and cappuccino.

The designated city of issue is Seattle, Wash.

Why Seattle? As Sara Dickerman wrote in Seattle magazine in 2018, it’s “the coffee-drinkingest town in all the country.”

Dickerman attributed this affection to the city’s long, dark winters and a need for “constant warming up and mood lifting.”

While espresso differs from standard coffee, prepared espresso drinks such as those shown on the new stamps are created from coffee beans and commonly served in coffee shops.

Seattle has a long history as home to independent coffeehouses. One of the nation’s largest coffee shop chains, Starbucks, got its start in the Emerald City, as did Seattle’s Best, a well-known coffee retailer and wholesaler.

The beverages appearing on the new stamps are mainstays of coffee shops such as Starbucks and others.

The four new stamps each feature a digital illustration of one of the espresso drinks, with artwork by Terry Allen.

“Capturing the inviting atmosphere of an early 20th-century cafe, each digital illustration was created with the style of 1920s and 1930s advertising posters in mind,” the Postal Service said in its announcement of the new stamps. “The names of the espresso drinks appear in art deco-inspired lettering above or below each enticing cup.”

The stamps were designed by USPS art director Greg Breeding.

For the uninitiated, here is a brief rundown of each drink’s characteristics.

Espresso is a thick concentrated hot coffee drink that originated in Italy. It is created through a mechanical process that forces hot water under pressure through finely ground coffee beans. It can be consumed on its own in a small cup or it might serve as one ingredient in other coffee drink varieties.

Caffe latte, for example, is created from espresso and steamed milk. The barista — the individual who prepares the drink and serves it to the customer — might create a decorative image in the creamy foam on top of the drink, as depicted on the stamp. The latte has a milky flavor because it is created with more milk than espresso.

Caffe mocha is prepared in a method similar to caffe latte, usually combining one part espresso to two parts steamed milk, but chocolate or cocoa powder is also added for flavor.

Cappuccino is created with espresso, milk and milk foam in equal parts, often with a bit of cocoa powder sprinkled on top, as the stamp illustration shows.

Variations on these drinks are numerous, although most do not stray far from the combinations described here.

As Sylvia Poggioli reported on NPR a few years ago, “Italy gave us the lingo — espresso, cappuccino, latte — and its coffee culture is filled with rituals and mysterious rules.”

In the United States, espresso drinks can vary from one coffeehouse to another but generally remain recognizable to the aficionado.

“Espresso drinking in the United States is at an all-time high,” the Postal Service reported. “With the growing popularity of artisanal coffee shops, extensive research on the roasting and brewing process, and continued innovation in machinery to make the perfect cup, specialty coffee is better than it has ever been.”

As the March 29 issue of Linn’s Stamp News was going to press, the Postal Service had not announced a first-day ceremony for the new issue, but it is likely a virtual tribute will take place on the USPS Facebook and Twitter pages.

Because of the COVID-19 pandemic, the Postal Service has not hosted stamp ceremonies open to the public for more than 12 months.

Coffee products have appeared only incidentally on U.S. stamps before this new issue, although several stamps have showcased attractive coffeepots.

A simple mug of steaming coffee is part of the vignette on the 22¢ Love You, Dad! stamp issued April 20, 1987, in a set of eight booklet stamps sharing joy through greetings (Scott 2270).

The American Design definitive series of 2002-14 includes two different designs depicting coffeepots. A silver coffeepot is shown on a 3¢ stamp issued as a self-adhesive sheet stamp (Scott 3754) and a coil with moisture-activated adhesive (3759).

A 5¢ stamp with a toleware coffeepot design was also issued, as two self-adhesive sheet stamps (Scott 3756-3756A) and a coil with moisture-activated adhesive (3612).

Many other stamps worldwide have been issued with a theme of coffee, most notably from prominent coffee-producing nations in Central America, South America and Africa.

In response to an inquiry from Linn’s Stamp News, Postal Service spokesman Roy Betts advised that the new Espresso Drinks stamps will not have an added aroma, as the Postal Service did on the 2018 Frozen Treats forever stamps (Scott 5285-5294).

For its first-day covers, the Postal Service has designed a color pictorial first-day cancel that comprises mostly text but reproduces the image of a dark coffee ring and splatters, common sights for espresso drink consumers.

The black first-day cancel, available to collectors on their own supplied stamped envelopes, is a simple four-bar cancel with the phrase FIRST DAY OF ISSUE.

Coffee, postcards and gratitude; how Starbucks encourages use of the mail