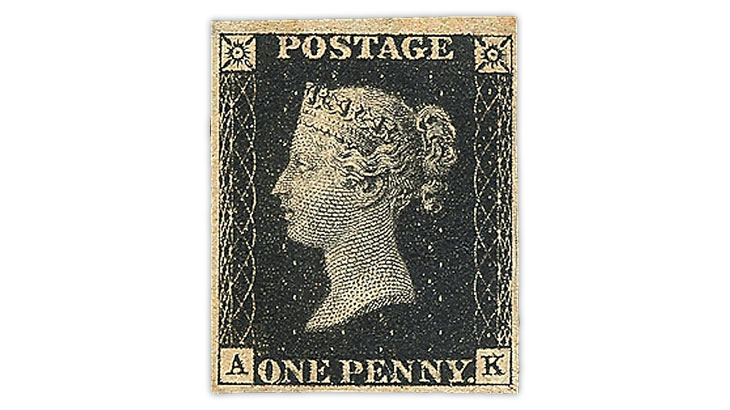 Figure 1. The world's first postage stamp, the Penny Black, was issued by Great Britain in 1840. 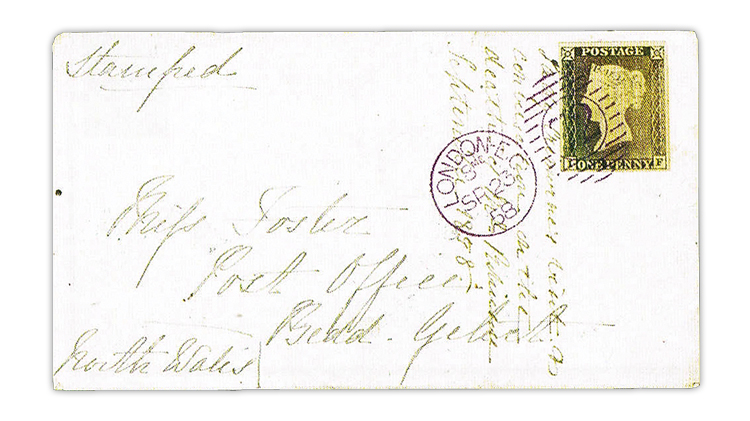 Figure 2. Among the earliest postal counterfeits is this fake Penny Black used on a genuine cover in 1858. It was sold in June 2015 by Harmers International. 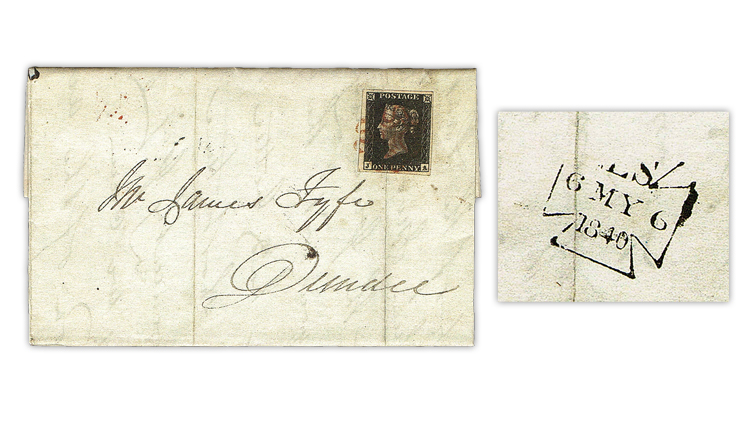 Figure 3. This facsimile of a genuine Penny Black first-day cover was prepared by Fleetwood, and properly marked as such. The dated cancel from the reverse is shown at left. 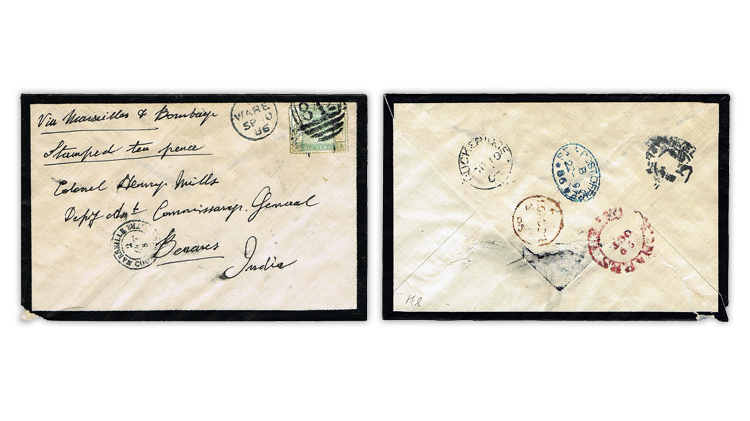 Figure 4. Totally fabricated from stamp to envelope to cancellations, this fake (shown both sides) simulates a mailing from England to India. The 1883 stamp is rouletted rather than perforated. The 1883 6-penny Queen Victoria stamp is not a bad rendition 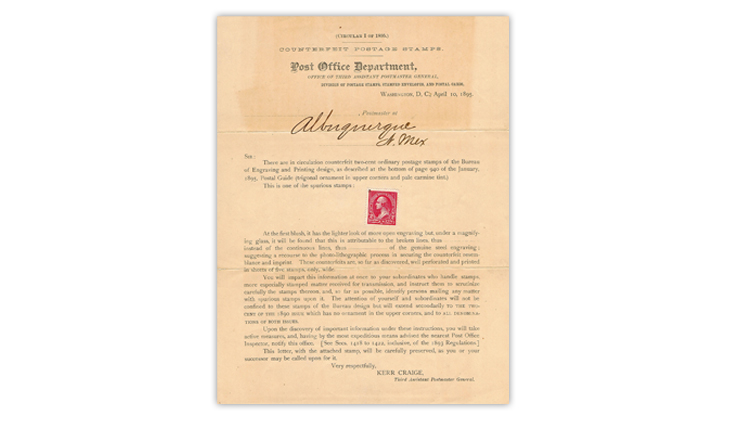 Figure 5. The first reported United States postal counterfeit was created of an 1894 2¢ carmine Washington stamp (Scott 250), but the authorities were able to shut down the operation before large numbers of counterfeit stamps were distributed. This 1895 c 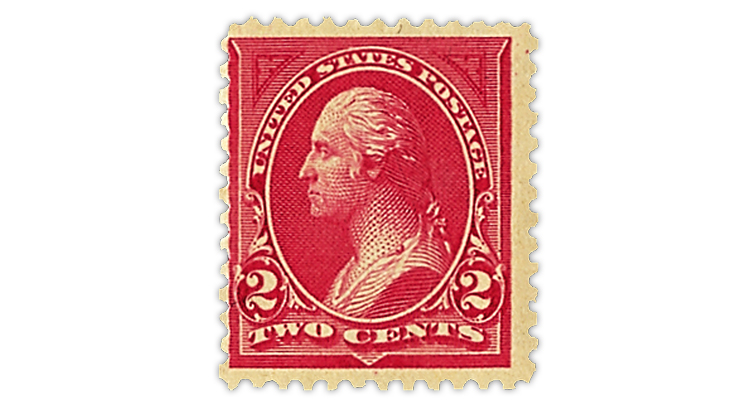 A common misunderstanding among stamp collectors is that falsifying stamps for profit is a relatively recent phenomenon. In fact, it dates back to the world’s first national postage stamp, the Penny Black of Great Britain, issued in 1840. Figure 1 shows an example of this stamp.

I love books that describe how things were in the early days of our hobby, so I jumped at the chance to acquire Chats on Postage Stamps by Fred J. Melville, published in 1911. Its 332 pages of text, plus a 15-page “Short [!] Bibliography of Philately,” paint a vivid picture of the mostly good old days.

Among the matters Melville discussed is the problem of “Forgeries, Fakes and Fancies” (chapter 8), in which he makes clear that satisfying the desire of collectors for the rare old stamps of Europe became a thriving business early on.

As rarity meant that there were too few genuine stamps to satisfy demand, there was a ready market for fakes. Some of these fakes were identified as such to help collectors fill spaces in their albums at a moderate price.

Others fakes were of higher quality so they could be passed off as genuine at rather steep prices. Despite the fact that there were almost always methods by which sharp-eyed collectors could differentiate genuine from forgery, the forgery business prospered as the ranks of stamp collectors began to swell in the first 20 years after the introduction of stamps for prepayment of postage in 1840.

Indeed, Edward L. Pemberton wrote the first major treatment of the subject in 1863: a booklet titled Forged Stamps and How to Detect Them. According to Melville, Pemberton was not the first to write about fake stamps, but he was “the best of several contemporary writers” on this subject.

Satisfying collector demand was not the only reason for forging stamps. What I call “postal counterfeits,” creations replicating current postage stamps for basic rates, gave the forger and his customers the chance to cheat the government of its proper revenue for postal services rendered.

Melville described what may be the first instance discovered: “The first attack on the Post Office revenue of which there is any record is the subject of a letter from Downing Street, London, dated September 2, 1840, and addressed to the late Sir (then Mr.) Rowland Hill: — ‘Mr. Smith has just called and informed me that a forgery of the Penny Label was yesterday detected in his office. The letter bearing the forged stamp has been handed over to the Stamp Office to be dealt with by them … the forged stamp is a wood-cut … ’

“An entry a few days later in Mr. Hill’s diary reads: — ‘At the Stamp Office I saw the forged label. It is a miserable thing and could not possibly deceive any except the most stupid and ignorant.’ … [This was] within four months of the issue of the first postage stamp.”

A much later use of a Penny Black postal forgery is shown in Figure 2. It was described by Harmers International in its June 2015 auction catalog as a “fascinating genuine use of forged ‘Penny Black’ used to defraud the post. Genuine 1858 violet London duplex with all appropriate Ireland transits to of all places a Post Office.”

An item I did get is a facsimile first-day cover of the Penny Black shown in Figure 3. It cost me $10. The genuine FDC is a bit more pricey, running about $60,000.

What I purchased was a properly described facsimile prepared by Fleetwood Co. based on a genuine FDC in its National First Day Cover Museum.

Figure 4 pictures another total fabrication: a fake stamp on a fake mourning cover with a range of fake cancels front and back. The stamp, a fake of the 1883 6-penny Queen Victoria, is not a bad rendition of the design, which is purposely obscured by a heavy cancel.

The giveaway is the small rouletting that simulates the genuine 14 gauge perfs.

The point of all this is that not even the oldest classics can be taken, pardon me, at face value. The need for expertization goes back almost to the founding of the hobby.

This is not to say that our hobby is corrupt — far from it. It is my experience that the vast majority of stamp collectors are, if anything, more honest and reliable than the general public. But it is prudent to make certain when buying expensive classics or modern rarities that they are genuine, and that they have not been altered. A reliable expertizing certificate can give you that assurance.

In early United States philately, there are alterations and even facsimiles aplenty, but the first reported American postal counterfeits did not appear until the 1894 series printed by the Bureau of Engraving and Printing. Different versions of the counterfeits exist, but the one most often seen is represented here by the Post Office Department circular shown in Figure 5.

These are the “Carl Street” or “Chicago” counterfeits, so called because the fake stamps were made at 26 Carl St. in Chicago in 1895 by a ring headed by a woman assisted by two men.

The stamps were distributed by the Canadian Novelty Co., of Hamilton, Ontario, but were advertised in the Chicago Tribune of March 31, 1895, as “$115 worth of stamps for $100."

This attracted the attention of a stamp dealer, who notified the Post Office Department. A Chicago tobacco dealer notified the Secret Service. Working together, these agencies seized 40,000 counterfeits, arrested the printers and distributors, and notified all post offices of the scam.

These counterfeits are of Scott 250, the engraved, unwatermarked 2¢ carmine Washington with the Type I triangle design, perforated gauge 12. Figure 6 shows a genuine example of this stamp.

The counterfeits are surface printed and do not have the sharpness and depth of design that engraved plates impart. They are perforated gauge 11.8 by 11.8. And, the counterfeits that were sent out to post offices as samples have a small “c” in the upper left corner.

This was the opening bell for U.S. postal counterfeits. Virtually every first-class rate period since has had at least one definitive stamp for that rate counterfeited, sometimes by multiple counterfeiters.

The problem continues and is getting more pervasive, not less.

I helped to produce a section of all known U.S. postal counterfeits for the Scott Specialized Catalogue of United States Stamps and Covers. This section first appeared in the 2013 edition of the Scott U.S. Specialized.

Several other collectors have contributed to the knowledge of this area, both with material from their own collections and with information in documents and articles. They are Richard Drews, Joanne and Kurt Lenz, Howard Petschel, Rudy de Mordaigle, and Lewis Kaufman. Together with Jim Kloetzel, editor-emeritus of the Scott U.S. Specialized, we have brought a subject, formerly in the shadows, to some level of philatelic prominence.