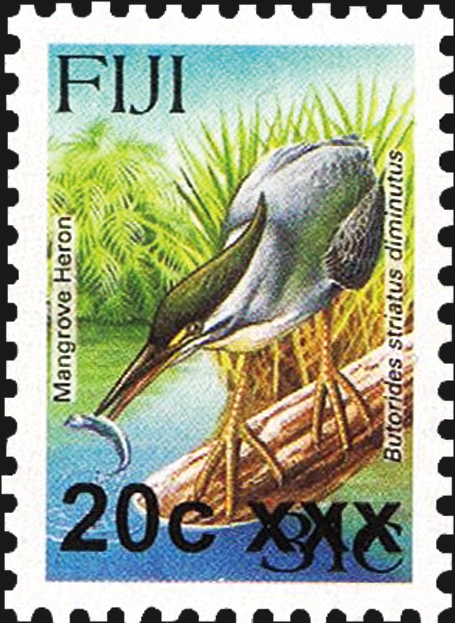 Fiji has been surcharging stamps in its 1995 Birds issue since 2006 to meet local postage rates and to use as make-up stamps for various international rates. Shown is the 31¢ stamp surcharged to 20¢.

Early in 2006, post offices in Fiji were in desperate need of stamps to cover current postage rates.

Post Fiji decided to use up its excessive stocks of redundant denominations from various commemorative issues. That would save both time and money by not having to order new stocks from overseas.

However, the rates had changed, and many of the existing denominations did not match the revised rates.

Post Fiji decided to produce low denominations (1¢ to 5¢) by overprinting existing stocks of obsolete denominations from the 1995 Bird definitives (Scott 725-739A) to produce make-up stamps to be used in combination with the old commemoratives.

Trials were instigated, and a local printer was selected to produce the surcharges. The first overprints issued were 2¢, 3¢ and 4¢ denominations, all overprinted on the 1¢ stamp.

Initially, the overprints were regarded as an emergency local issue, and they were not advertised or made available to collectors.

It was only after some of these stamps were spotted used on mail that philatelic interest was aroused.

Many varieties exist because the standards of the printing machinery used and quality control occasionally leave something to be desired.

If the details of the overprints are clear and visible, Post Fiji releases them for postal use, even if they are skewed or displaced.

Among the varieties are misplaced or missing overprints, overprint setting varieties, and inverted and doubled overprints.

Some stamps are extremely scarce, and keen collectors have paid high prices for these rarer varieties, as confirmed by some of the values in Vol. 2 of the Scott Standard Postage Stamp Catalogue.

However, many of the stamps can be bought for a small outlay, and even the scarcer stamps are comparatively inexpensive given the exceedingly small numbers printed.

Overprints continue to be produced in Fiji and widely used today, nine years after the first emergency issue was released.

The small-size stamps are popular with the Fijian population, and Post Fiji still holds considerable stocks of obsolete denominations.

As time has gone by, stocks of some of the base denominations used for overprinting have been exhausted.

The use of overprinted stamps for the local postage rate and make-up denominations has become accepted practice, and when Post Fiji’s stocks of 50¢ stamps for the New Zealand-Tonga rate ran low, 50¢ overprints were commissioned.