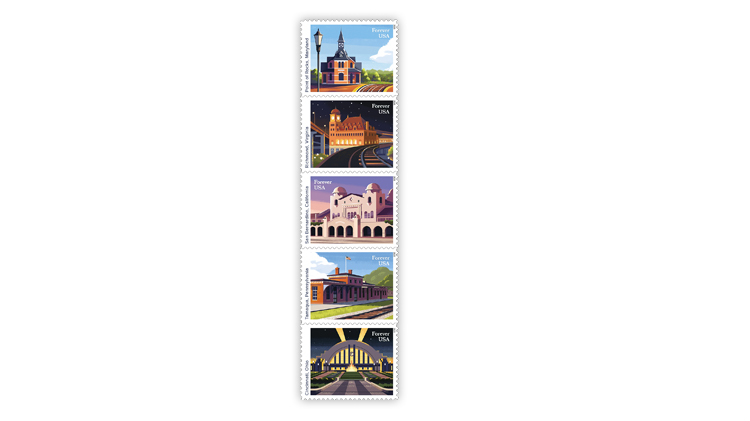 Union Terminal in Cincinnati will serve as the location for the March 9 first-day ceremony for the five United States Railroad Stations stamps.

The set of five United States Postal Service Railroad Stations stamps will be issued March 9, 2023, with Union Terminal in Cincinnati as the location for the first day of issue, according to an article posted Nov. 21 on the website of WVXU, Cincinnati’s NPR radio station.

At this time, the USPS has provided no further ceremony details.

Union Terminal is one of the five stations shown on the commemorative forever stamps in the set, along with Tamaqua Station in Pennsylvania; Point of Rocks Station in Maryland; Main Street Station in Richmond, Va.; and Santa Fe Station in San Bernardino, Calif.

Elizabeth Pierce, CEO of the Cincinnati Museum Center located within Union Terminal, said it was an honor to have the train station featured on a stamp.

“Its history and architecture make it a National Historic Landmark, but its place in people’s lives make it an icon. Union Terminal has been an integral part of our community’s memories for nine decades and, with the release of these commemorative stamps in 2023, we get to reintroduce the nation to our local treasure,” WVXU quoted Pierce as saying.

The stamps, designed by Down the Street Designs, will be issued in panes of 20.