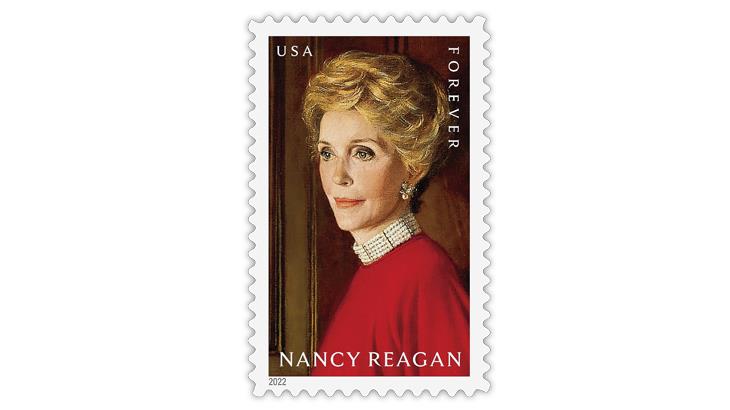 The United States Postal Service will issue a commemorative forever stamp honoring Nancy Reagan on July 6. The stamp design was unveiled June 6 at the White House. 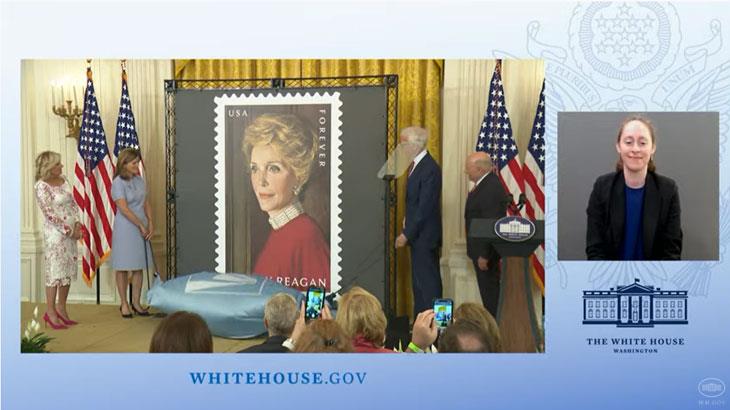 First lady Jill Biden, far left, is shown unveiling the design of the upcoming Nancy Reagan stamp at the White House. Screen capture courtesy of the White House.
Previous
Next

Supporters of the new United States commemorative stamp for Nancy Reagan — the sixth first lady to appear on a U.S. stamp — had hoped she could have been honored by a first-day ceremony last summer on what would have been her 100th birthday.

But the COVID-19 pandemic forced a year’s delay for the issuance of the stamp, now scheduled for July 6.

That fact about the surprise Nancy Reagan stamp was disclosed by the White House as first lady Jill Biden hosted a June 6 ceremony to unveil its design.

“Isn’t this stamp just beautiful?” Biden said at the event.

The first lady joined three speakers in lauding Nancy Reagan as a person who performed well in a high-profile job that has no clearly defined role.

But Reagan “knew the potential of this role” and she played it well, Biden said.

“And with this stamp we are affirming that she made such a difference.”

The stamp will be issued at a first-day ceremony at the Ronald Reagan Presidential Library and Museum in Simi Valley, Calif.

“Through the issuance of the Nancy Reagan stamp, we hope to provide the means for the public to come together in remembrance and commemoration of this great and impactful American,” DeJoy said

Other speakers recalled Reagan’s devotion to her husband and the causes she championed as first lady, such as her “Just Say No” campaign against illicit drugs.

“She was fiercely loyal to her husband and her country, always placing them first,” Peterson said.

“I am sure she would be humbled by this special tribute!” she emphasized.

Reagan’s son, Ron Reagan, who did not attend the event, was quoted by the Postal Service as welcoming the stamp.

“Her own stamp! I’m sure she never expected to receive an honor like this,” he said.

“Neither did she expect to be flying all over the country stuck to the front of envelopes,” he said.

“She would, of course, have reacted modestly to this wonderful commemoration,” he said.

“But secretly she would be very pleased. On her behalf, I thank you.”

Reagan will become the sixth first lady whose image is featured on a U.S. stamp.

Her stamp image is based on the 1987 White House portrait by Aaron Shikler, which shows Reagan in a red flowing gown designed by James Galanos.

The image was cropped to a stamp format by art designer Greg Breeding.

The Postal Service did not respond to a request from Linn’s Stamp News regarding the number of Nancy Reagan stamps to be printed.

If the stamp had been issued last year on Reagan’s 100th birthday, it would have followed a tradition set by the Lady Bird Johnson souvenir issued in 2012 to mark Johnson’s birth centennial.

Dolly Madison is featured on a 1980 stamp, and Abigail Adams is shown on a stamp issued in 1985. A Love stamp issued in 2001 shows part of a love letter Adams wrote to her husband, John Adams.

This story was updated June 7 with new information.