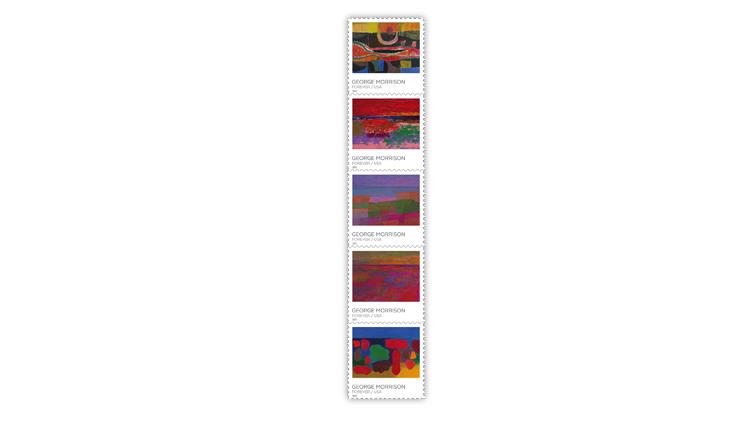 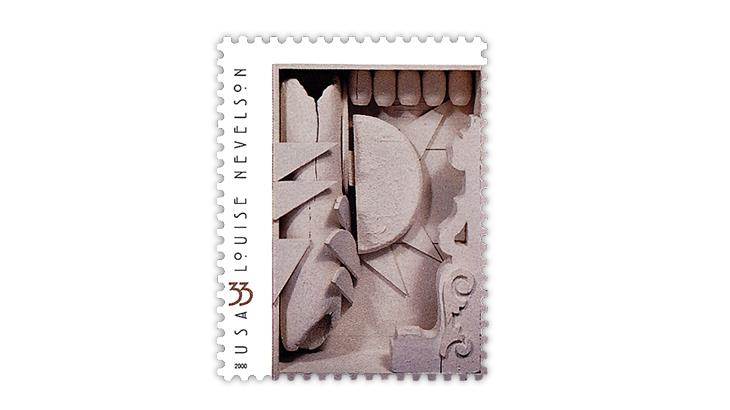 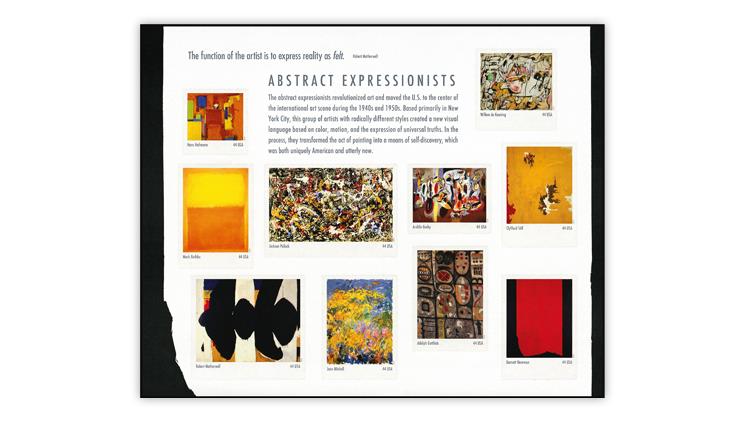 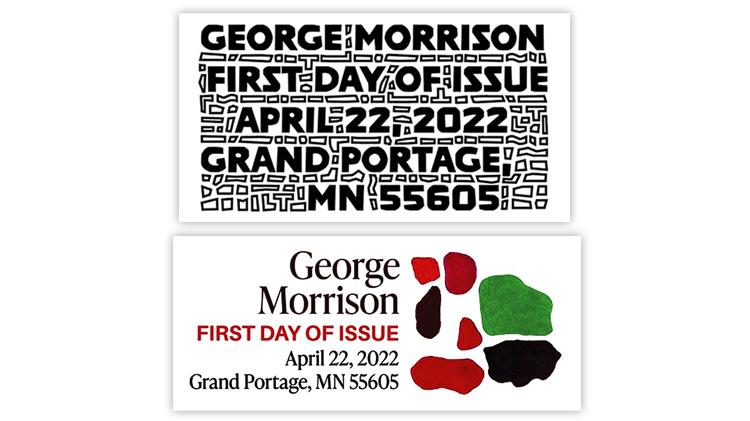 Works of art by Ojibwe landscape painter and sculptor George Morrison (1919-2000), a pivotal figure of Native American modernism, are the subject of five United States commemorative forever stamps to be issued April 22.

Collectors desiring to attend the ceremony, which is free and open to the public, are encouraged to register online.

Steve Monteith, chief customer and marketing officer and executive vice president of the U.S. Postal Service, will be the dedicating official.

Pictured in the wide left selvage (margin) of the pane is a 1993 photograph of Morrison by Marlene Wisuri. In the photo, which was taken at Red Rock (Morrison’s home and studio in Grand Portage, Minn.), the bespectacled Morrison is dressed in a dark shirt and trousers and seated on a stool, gazing to his right with a contemplative look.

According to the USPS, Stamp Fulfillment Services will not make an automatic push distribution of the George Morrison stamps to post offices. Therefore, it is likely that some post offices will not have panes available for sale on April 22.

“George Morrison challenged prevailing ideas of what Native American art should be, arguing that an artist’s identity can exist independently from the nature of the art he creates,” the Postal Service said.

“He is best known for his abstract landscape paintings and monumental wood collages, which draw on childhood memory and reflect a deep and abiding connection with the natural world.”

A prominent feature of the works shown on the stamps is a horizon line that typically appears one-fourth of the way down from the top of the picture, according to an essay by W. Jackson Rushing III published on the website of the Minnesota Museum of American Art.

“The Minnesota Museum of American Art’s 1990 Morrison retrospective, Standing in the Northern Lights, has been the only survey to date of this unique artist’s entire oeuvre from the 1940s through his death in 2000,” Rushing said.

Numerous works of abstract and modern art have been showcased on previous U.S. stamps.

Abstract impressionists were honored on a pane of 10 44¢ stamps (Scott 4444) issued March 11, 2010. One of the stamps pictures Mark Rothko’s 1956 oil-on-canvas painting Orange and Yellow. Some of Morrison’s earlier work has been compared to Rothko’s so-called “multiforms.”

A pane of 12 nondenominated (46¢) forever stamps illustrating works of modern art by various artists (Scott 4748) was issued March 7, 2013, to recognize the centennial of the 1913 Armory Show, also known as the International Exhibition of Modern Art, held in New York City.

A black postmark consisting of a circular datestamp superimposed over abstract shapes and inscribed “George Morrison” is to be used by post offices that host a dedication ceremony for the George Morrison stamps.

“The word ‘Station’ or the abbreviation ‘STA’ is required somewhere in the design because it will be a temporary station. Use of any image other than the … special pictorial image is prohibited,” the Postal Service said.

Two pictorial first-day postmarks for the George Morrison stamps are also available from the Postal Service.

Full color pictorial first-day cancels found on covers marketed by the Postal Service and others prepared by some cachetmakers illustrate seven splotches of color to the right of the cancel inscription that includes Morrison’s name and the official first day and location. The arrangement of the colored spots resembles daubs of paint arranged on an artist’s palette.

All orders for George Morrison first-day cancels must be postmarked by Aug. 22.