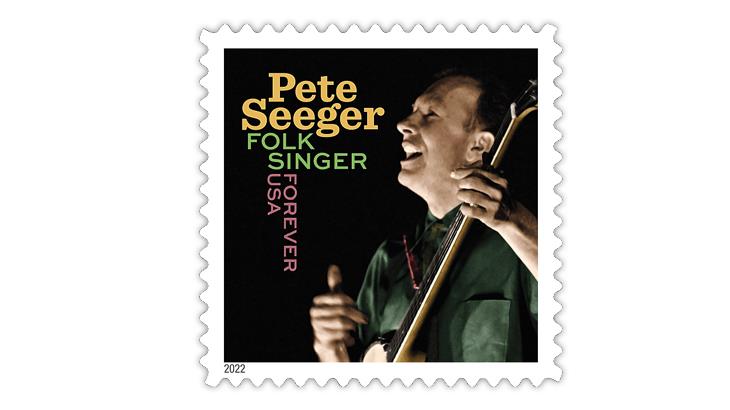 On July 21, one day before the opening of the Newport Folk Festival in Newport, R.I., the United States Postal Service will issue a commemorative forever stamp in honor of folk singer Pete Seeger. The first-day ceremony will be held just prior to the “For 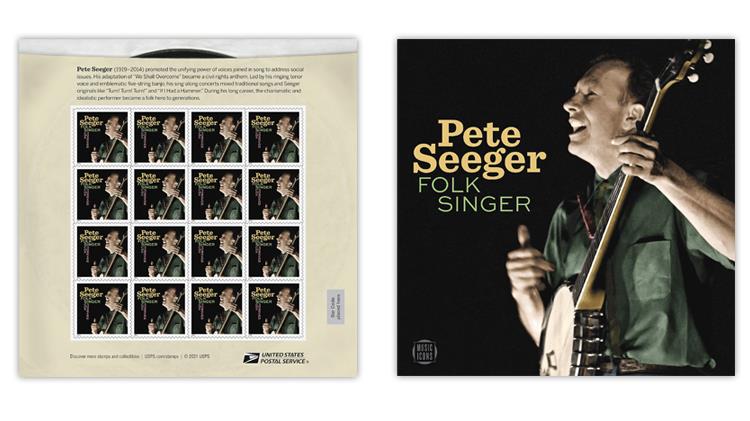 Both sides of the Pete Seeger pane of 16 feature design elements that mimic a 45 rpm phonograph record tucked inside its protective paper sleeve. The record can be seen peeking from the top side of the front of the pane. 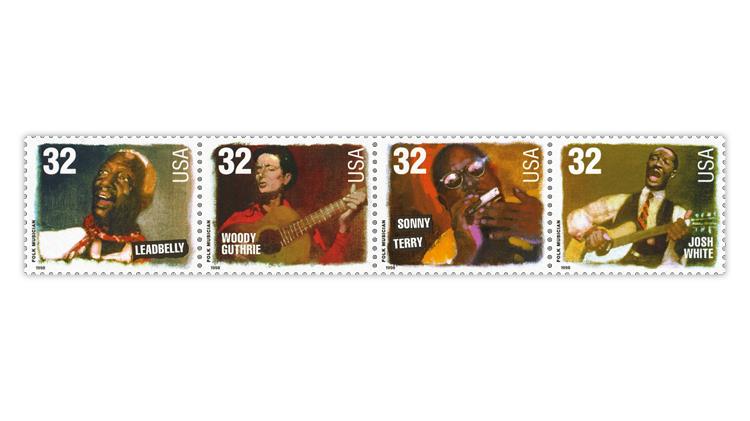 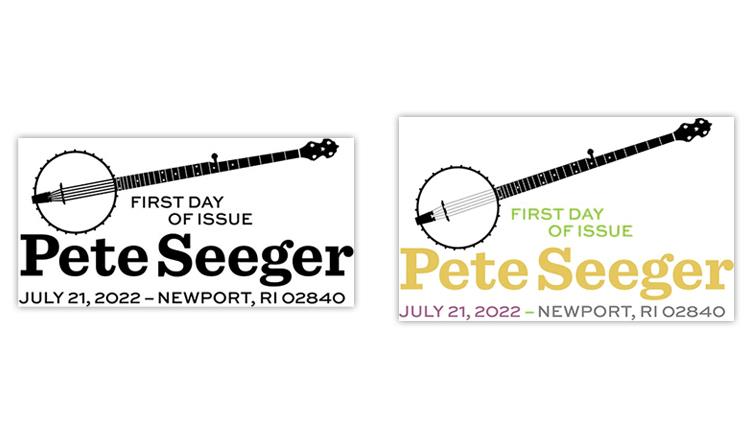 Both pictorial postmarks for the Pete Seeger stamp feature the same design. One is in black, and the other shows the various elements in five different colors.
Previous
Next

Pete Seeger, whose social activism infused his career as a folk singer and songwriter, will be honored on a nondenominated (60¢) commemorative forever stamp to be issued July 21 in Newport, R.I.

Seeger is the 10th musician to appear on a stamp in the United States Postal Service’s popular Music Icons series.

The first-day ceremony for the Pete Seeger stamp comes one day before the opening of the July 22-24 Newport Folk Festival, which will take place at Fort Adams State Park.

Linn’s Stamp News reported June 22 that the ceremony will take place at 8 p.m. prior to the “For Pete’s Sake” concert at the Jane Pickens Theater, 49 Touro St., in Newport.

“This is a ticketed event with limited ticket availability,” the Postal Service said. “There will be ONLY ONE TICKET issued per confirmed RSVP.”

In late June, the USPS said “there are no more tickets available for the ceremony.”

Retail sales will be held at Eisenhower Park, across the street from the Jane Pickens Theater, the Postal Service said.

On the new stamp, Seeger is seen playing his signature five-string banjo in a color-tinted, black-and-white photograph taken in the early 1960s by Seeger’s son, Dan Seeger. Kristen Monthei colorized the photo for use on the stamp.

The Pete Seeger forever stamp will be issued in a pane of 16 similar in style to previous Music Icons issues. Shown above is the Postal Service’s preliminary artwork for both sides of the pane, which resembles a 45 rpm phonograph record tucked inside its accompanying paper sleeve. The record is peeking from the top of the front of the pane.

The 16 stamps are arranged in a four-by-four block. Just above the top row of the block is a brief biography of Seeger (1919-2014) that mentions two of his most recognizable songs: If I Had a Hammer, which Seeger wrote in 1962 with Lee Hays, and Turn! Turn! Turn!, which Seeger composed in 1962.

If I Had a Hammer was popularized by the folk group Peter, Paul and Mary, and the Byrds brought Turn! Turn! Turn! to a wider audience when it became a No. 1 hit in 1965.

Pictured on the back of the pane is a large version of the photo that appears on the stamp, along with the Postal Service’s Music Icons logo in the lower left corner.

USPS contract printer Banknote Corporation of America printed 22 million Pete Seeger stamps in 1,375,000 panes of 16 using the four process colors: black, cyan, magenta and yellow. There are no plate numbers on the front or back of the pane, according to the USPS.

Both Alcala and Dan Seeger shared how the stamp honoring Dan’s father came to fruition.

“In 2018 we determined that the stock photograph of Pete Seeger we had been using could not be used for the final stamp,” Alcala told Linn’s.

To read the rest of this story about the new Pete Seeger stamp, subscribe to Linn’s Stamp News.