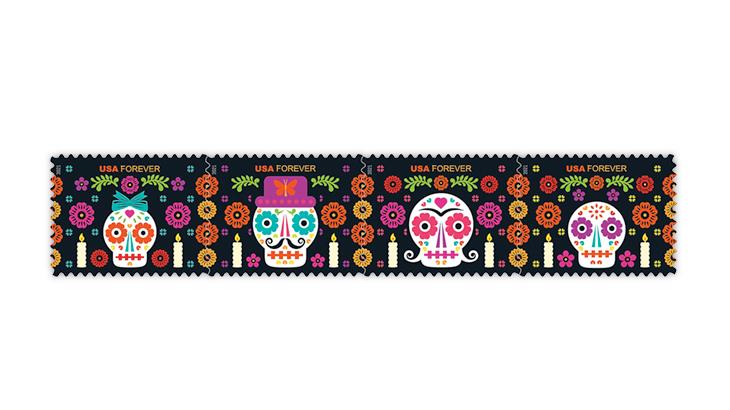 Four Day of the Dead commemorative stamps will be issued in a pane of 20 on Sept. 30. The stamps mark the holiday that originated in Mexico to honor and celebrate family members and heroes who have died. 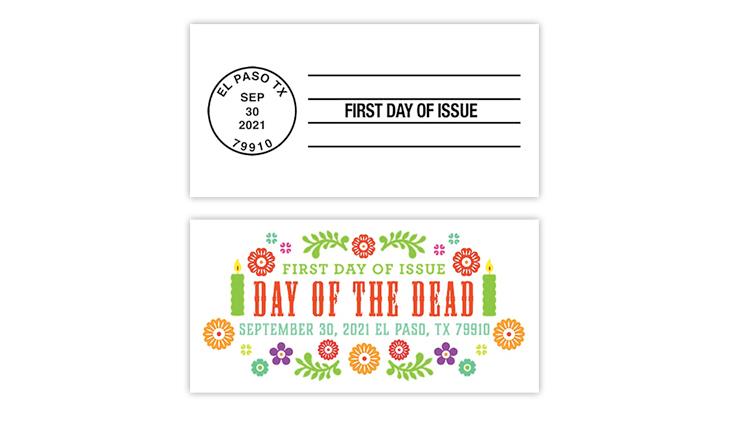 First-day cancels for the Day of the Dead commemorative stamps have been prepared in black and in full color.
Previous
Next

The illustrations for the four new Day of the Dead forever stamps from the United States Postal Service feature design elements associated with the traditional Mexican celebration known as Dia de los Muertos.

The stamps will be issued in a pane of 20 on Sept. 30, with a first-day ceremony in the west Texas city of El Paso. The city of 680,000 borders Mexico along the Rio Grande.

The ceremony will begin at 11 a.m. Mountain Time at the El Paso Museum of Art at 1 Arts Festival Plaza. Michael J. Elston, secretary of the USPS board of governors, will serve as dedicating official.

The event is open to the public, with online registration available on the USPS website.

The Day of the Dead is an annual holiday celebrated Nov. 1 and often extending to Nov. 2.

“Although marked throughout Latin America, Dia de los Muertos is most strongly associated with Mexico, where the tradition originated,” according to the National Geographic Society.

“Recently it has become increasingly popular among Latino communities abroad, including in the United States,” wrote Maria Anderson for the Smithsonian Institution.

The celebrations share the calendar with the Roman Catholic minor holidays of All Saints Day on Nov. 1 and All Souls Day on Nov. 2, and begin on the day immediately following Halloween (also known as All Hallows’ Eve).

Though different in many ways, the Day of the Dead and Halloween are both holidays based on the concept that spirits of the dead can pass into this world on the day of celebration. Skeletons and skulls are common elements for both days.

Day of the Dead observances are festive celebrations of those no longer living and include preparing home altars known as ofrendas decorated with candles, flowers and foods, including special breads and candies.

Visits to the cemeteries where family members rest are marked by meals and conversation.

The plot of a 2017 Disney and Pixar animated film, Coco, is based on the traditions and music of the Day of the Dead, as an aspiring young musician is transported to the Land of the Dead and seeks to learn more about his heritage.

When celebrated as a two-day festival, the Day of the Dead remembers children who have passed away on the first day and adult family members and heroes on the second day.

The four stamps in the new issue recognize this, with smaller skulls prominent in the design of two of the stamps, representing children, and larger skulls in the other two stamps to celebrate adults.

The Postal Service describes these elements as stylized “sugar skulls” personalized as four family members: a child with a hair bow, a father sporting a hat and mustache, a mother with curled hair, and another child.

“The lit candles flanking each sugar skull are beacons to guide deceased loved ones on their annual return journey to the land of the living,” according to the Postal Service. “Dotting each stamp and embellishing their vertical borders are marigolds (cempazuchitles), the most popular Day of the Dead flower.”

The vibrant colors of the stamp designs are set against a black background.

The Postal Service has celebrated its own efforts to recognize Hispanic subjects on U.S. stamps and has published a lengthy list of those stamps.

According to the Postal Service's introduction to that list, the first U.S. stamp to portray Hispanic subjects was the 1869 15¢ Landing of Columbus (Scott 118) picturing a group of Spanish explorers next to Columbus, and the 1903 $1 David G. Farragut stamp (311) was the first to honor a Hispanic American.

The Postal Service has prepared two first-day cancels for the Day of the Dead issue. The black postmark is applied free to most collector-submitted covers. It is a traditional four-bar cancel from El Paso with the words “FIRST DAY OF ISSUE.”

A full color pictorial postmark is also available. Text in the center of the postmark reads “DAY OF THE DEAD,” surrounded by many of the floral elements that appear on the new stamps.

The color postmark can be obtained by collectors on envelopes constructed from laser safe paper. There is an order minimum of 10 envelopes with a fee of 50¢ per postmark. The USPS Postal Bulletin provides additional ordering information.

Both postmarks are also applied to first-day covers manufactured and sold by the Postal Service.

U.S. Day of the Dead stamps to arrive Sept. 30 in El Paso