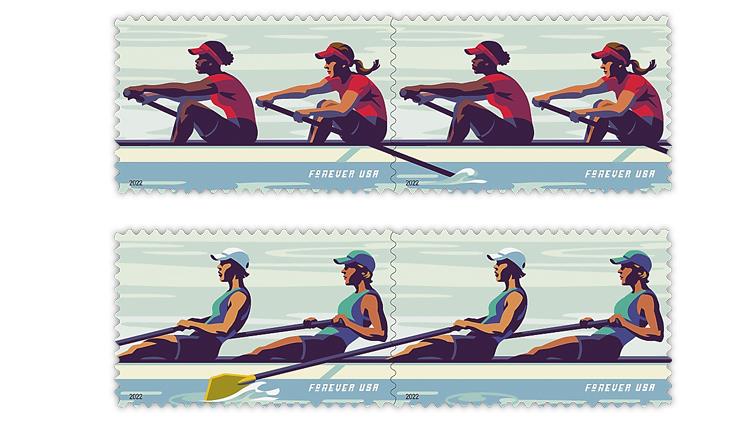 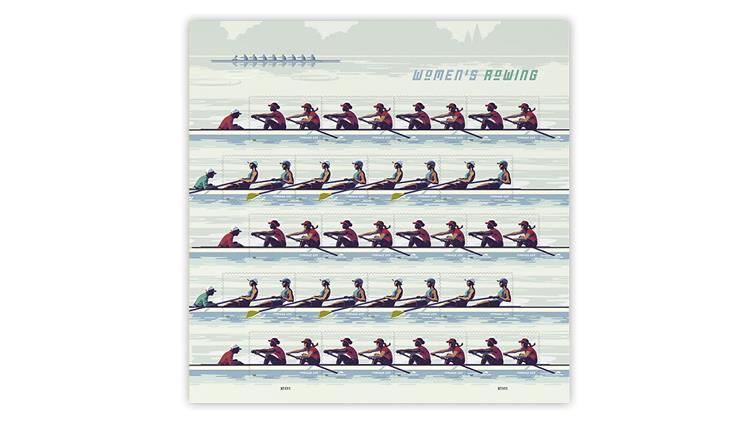 The U.S. Postal Service’s preliminary artwork for the Women’s Rowing pane of 20 shows the stamps arranged in five staggered rows of four stamps (two se-tenant pairs) each. Because of subtle design differences and the arrangement of the four design-different stamps, each pane contains three of the first stamp, nine of the second, six of the third and two of the fourth. 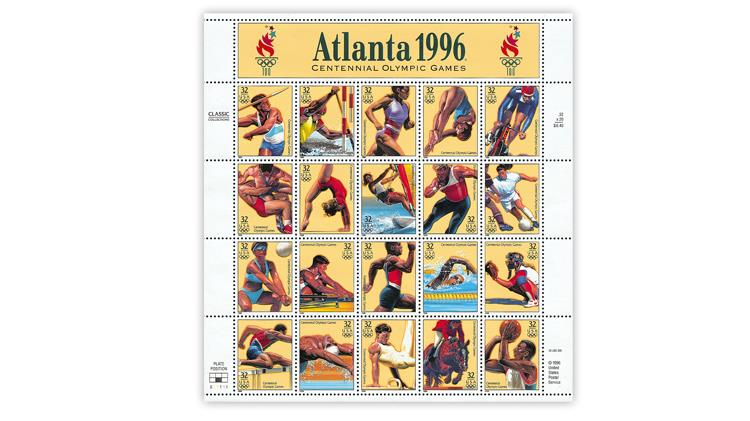 Many U.S. stamps issued in honor of the Olympic Games feature representations of women athletes. Eight of the 20 32¢ stamps commemorating the 1996 Summer Olympics in Atlanta picture women competitors. 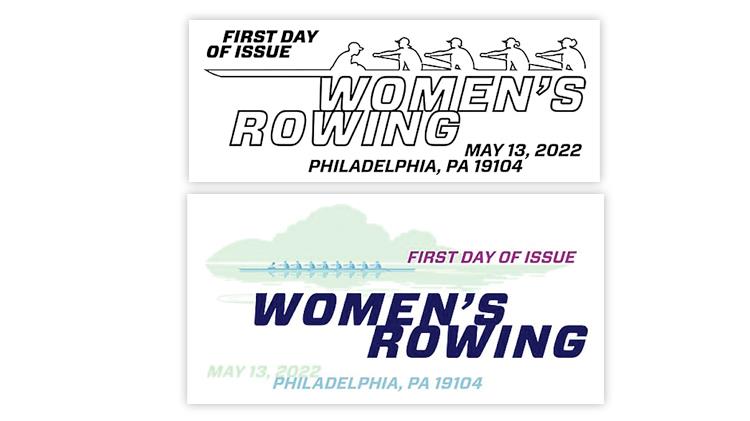 Two pictorial first-day postmarks will be available for the Women’s Rowing stamps. A scene similar to that shown on the top selvage of the pane is visible on the digital color postmark just above the “Women’s Rowing” inscription.
Previous
Next

An official first-day ceremony for the Women’s Rowing stamps is scheduled to start at 11 a.m. Friday at the Philadelphia Girls’ Rowing Club, 14 Kelly Drive, Philadelphia.

The event is free and open to the public. The Postal Service encourages those desiring to attend to register online.

Joe Corbett, chief financial officer and executive vice president of the USPS, will serve as the dedicating official.

Socha told Linn’s Stamp News that the Philadelphia Girls’ Rowing Club, which was founded in 1938, was selected as the site for the first-day ceremony “because we are the first and only women’s rowing club in the United States.”

“We are the only women’s club that owns its building and the equipment. We teach women to row, all ages, shapes, and sizes,” Socha said.

She described the stamp designs as beautiful and having vibrant colors.

“There is no mistaking that the images are female,” Socha said.

“This issuance celebrates women’s rowing, a graceful but demanding sport in which American women have excelled,” the USPS said.

The slow, tepid reaction of some colleges and universities did not stop women from demanding that they be allowed to compete in varsity sports, according to the Postal Service.

Earlier this year, on March 3, the USPS issued a quartet of stamps (Scott 5668-5671) honoring the 50th anniversary of Title IX.

According to the Office of Civil Rights of the U.S. Department of Education, Title IX recipients “include approximately 17,600 local school districts, over 5,000 postsecondary institutions, and charter schools, for-profit schools, libraries, and museums. Also included are vocational rehabilitation agencies and education agencies of 50 states, the District of Columbia, and territories of the United States.”

The Postal Service ordered a print run of 18 million Women’s Rowing stamps in panes of 20.

On one pair, the rowers are about to begin a stroke, and on the other, the rowers have just completed a stroke and lifted their oars out of the water.

The images of the two rowers on each stamp in a pair are identical, but the overall designs are slightly different because of the positions of the oars on each stamp.

For example, the right stamp in all of the pairs featuring rowers wearing red shirts shows part of an oar in the lower left corner. This design element is not seen on the left stamp in three of those pairs.

On the left stamp of all of the pairs picturing rowers in blue tank tops, the yellow blade of an oar is visible just above the water. This design element is not part of the right stamp in two of the pairs. The stamp with the yellow blade visible is designated stamp C, and the other stamp is D.

These letter designations apply regardless of a given stamp’s position in any pair of the pane of 20.

Each pane consists of five staggered rows of four stamps, with each row containing two se-tenant pairs. Together the two pairs in each row picture eight rowers.

Because of the subtle design differences and the arrangement of the stamps, each pane of 20 contains three of stamp A, nine of stamp B, six of stamp C and two of stamp D.

The decorative selvage (margin paper) at left pictures a coxswain seated in the stern (rear) of each eight-person boat (also called a shell) illustrated on the four stamps in each row. The coxswain faces the bow (front) and is responsible for steering the boat and helping the rowers coordinate power and maintain rhythm.

An eight-person boat and coxswain are visible in the distance in the top selvage. “Women’s Rowing” is printed in capital letters at upper right.

“The artwork, which covers the entire pane, is a stylized illustration of five 8-person crews on the water, apparently practicing or possibly racing,” the USPS said.

Women’s rowing became an Olympic sport in 1976. Men have been rowing in the Olympic Games since 1900.

Representations of female athletes have appeared on U.S. stamps over the years. Many of these stamps were issued to celebrate the Olympic Games held in the summer and winter at regular intervals.

One of the four 13¢ stamps issued July 16, 1976, to celebrate the 12th Winter Olympic Games in Innsbruck, Austria, and the 21st Summer Olympic Games in Montreal, Canada, pictures a stylized image of a woman diver about to enter the water (Scott 1695).

A dramatic image of women hurdlers appears on one of the five 29¢ stamps issued July 12, 1991, in anticipation of the Summer Olympic Games that would take place the following year in Barcelona, Spain.

The Postal Service has prepared two pictorial postmarks as first-day cancels for the Women’s Rowing stamps.

Four rowers and a coxswain and “Women’s Rowing” are outlined on the black cancel. The digital color postmark features a scene similar to that shown on the top selvage of the pane but rendered in shades of green and blue instead of variations of gray.