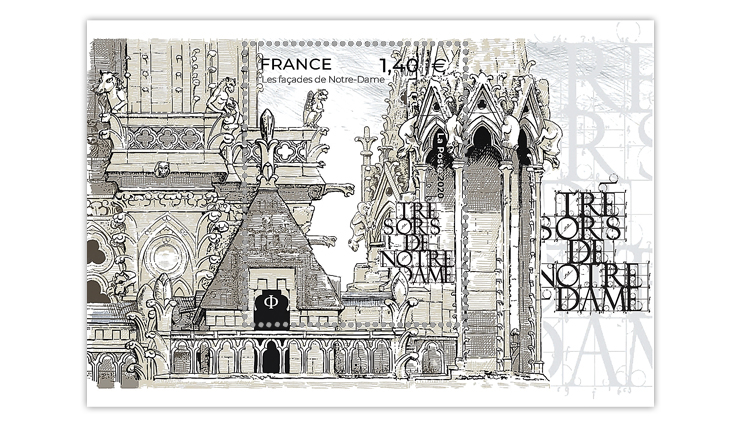 The first souvenir sheet in France’s new Treasures of Notre Dame series will be issued April 15, one year after fire destroyed much of the Gothic cathedral in Paris.

One year after the fire that devastated Paris’ Notre Dame Cathedral, France’s La Poste will begin a series of stamps devoted to that cathedral’s treasures.

On April 15, 2019, a fire destroyed the cathedral’s spire and most of the roof. France’s President Emmanuel Macron immediately promised that the cathedral would be rebuilt in five years, in time for the 2024 Summer Olympics in Paris.

La Poste’s new series, called Treasures of Notre Dame, will begin April 15. The first issue in the series is a souvenir sheet with a single €1.40 international-rate stamp.

In announcing this souvenir sheet, La Poste said that the series will highlight the treasures, riches and heritage of the 12th-century cathedral during the reconstruction period.

The engraved black-and-white souvenir sheet depicts a drawing of part of the cathedral’s facade with many of its famed gargoyles pictured.

The Greek letter phi can be seen in the window in the lower left corner of the design of the €1.40 stamp. In recent years La Poste has used this symbol to indicate its commemorative stamps.

The words “Tresors de Notre-Dame” (French for treasures of Notre Dame) are inscribed twice on the souvenir sheet, on the right side of the stamp design and in the selvage to the right of the stamp. In both instances, this five-line inscription (the “tre” of “tresors” is in the first line and “sors” in the second) is surrounded by lines that resemble scaffolding.

According to La Poste, Sarah Bougault designed and engraved the souvenir sheet, using a photograph by Marcel Kusch.

Philaposte printed the souvenir sheet by intaglio in a quantity of 350,000.