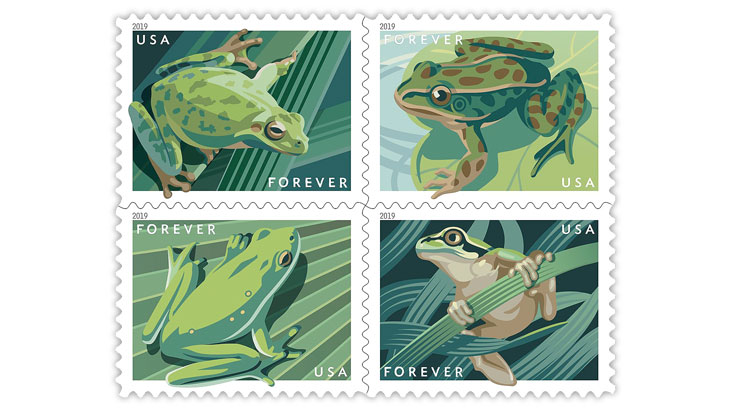 The United States Postal Service will issue four Frogs stamps July 9. The stamps showing a squirrel tree frog, a northern leopard frog, an American green tree frog and a Pacific tree frog will be sold in double-sided panes of 20. 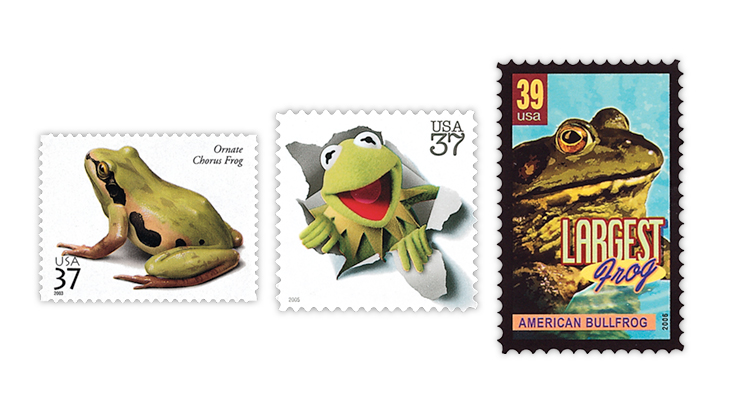 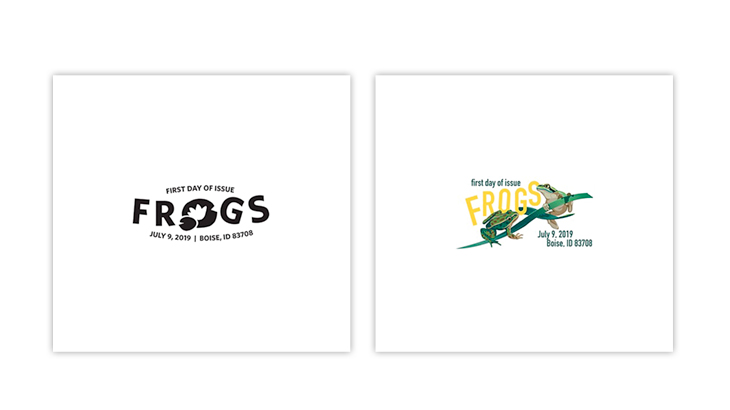 Two pictorial first-day cancels have been prepared for the Frogs stamps.
Previous
Next

Frogs have appeared on United States stamps before, just never this prominently.

Four nondenominated (55¢) forever stamps celebrating frogs will be issued July 9 with a first-day ceremony in Idaho.

Individuals planning to attend the ceremony can register in advance at usps.com/frogs.

The four stamps show a Pacific tree frog, a northern leopard frog, an American green tree frog and a squirrel tree frog and will be issued in a double-sided pane of 20, which the Postal Service describes as a booklet.

Although the frogs are identified by name in Postal Service promotional material, those names do not appear on the stamps.

Each stamp design is a digital illustration that shows one frog in a green setting.

“Working with a primarily green color palette and touches of brown, artist Nancy Stahl captured the essence of each animal with enough important defining features to make each recognizable,” according to the Postal Service.

The Postal Service provides a brief description for each of the illustrated frogs on the ceremony registration web page:

Sometimes called the rain frog for its noisy choruses after a warm rain, the American green tree frog (Hyla cinerea) is also dubbed the cowbell frog for the sound of its short call when heard from a distance.

A raspy, quack-like call much like the scolding noise of a gray squirrel identifies the squirrel tree frog (Hyla squirella), found from southeastern Virginia through Florida and along the Gulf Coast to Texas.

The only prominent inscriptions on the individual stamps are “FOREVER” and “USA.”

The Postal Service notes that frogs live on every continent except Antarctica, and that more than 90 species live in the United States, including the four on these stamps.

Frogs are amphibians, grouping them in the same class as salamanders and caecilians (limbless creatures that resemble worms or snakes, depending on their size).

Toads are actually frogs that have drier and bumpier (or warty) skin.

The frog can be carnivorous or omnivorous, and most species make their homes near fresh water, though some live in trees.

Frogs are mentioned in the Old Testament of the Bible as one of the 10 plagues visited upon Egypt and Pharaoh, where untold numbers of frogs left the rivers to invade the land and its peoples’ homes.

In recent years, frogs and other amphibians have been struggling against a critical fungal illness devastating populations worldwide.

“The chytrid fungus Batrachochytrium dendrobatidis was identified in amphibian populations about 20 years ago and has caused death and species extinction at a global scale,” according to a 2019 report from Science.

Populations of more than 500 amphibian species have been declining, with 90 presumed extinctions.

Since amphibians are an important food source for other animals, the decline impacts global biodiversity.

Frogs have appeared on earlier U.S. stamps, but often as part of a group including other animals or subjects. A small frog is shown in the lower left corner of the 20¢ Louisiana World Exposition stamp issued May 11, 1984 (Scott 2086).

The Postal Service is making available two pictorial first-day cancels for the new stamps. The black cancel includes a design showing a flowering lily pad, and the color cancel depicts two of the four frogs from the stamps among green vegetation.