Fruits and Vegetables stamps go to market with 10 designs 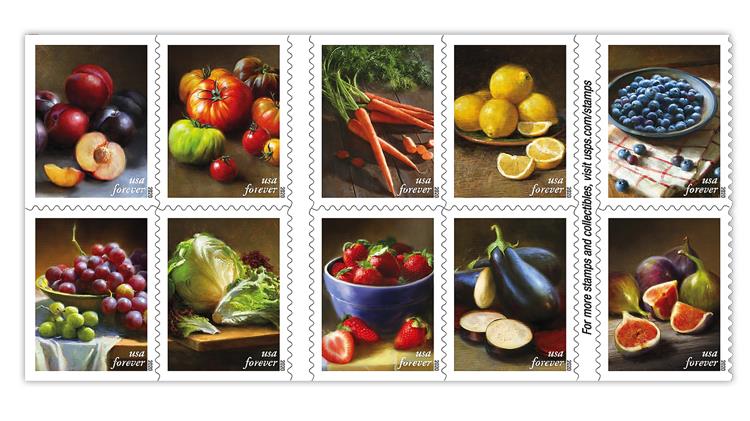 Ten different United States Fruits and Vegetables stamps will be issued July 17 in a double-sided pane of 20, which the Postal Service describes as a booklet. 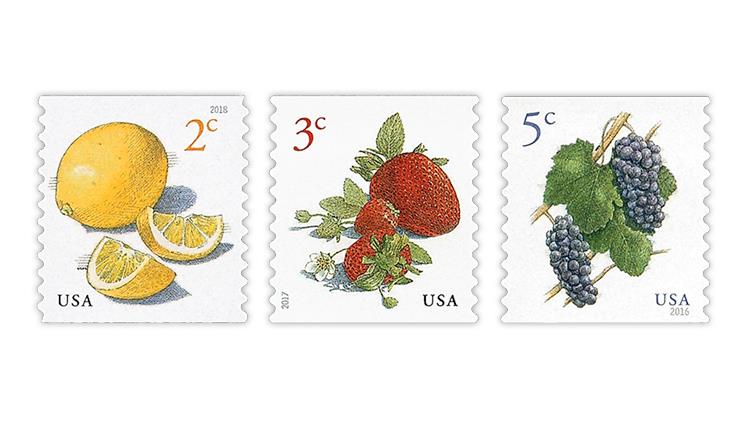 The U.S. Fruits definitive stamps fulfilling lower denominations have been issued since 2016. The three fruits on the coil stamps shown here are also represented on new stamps in the Fruits and Vegetables set. 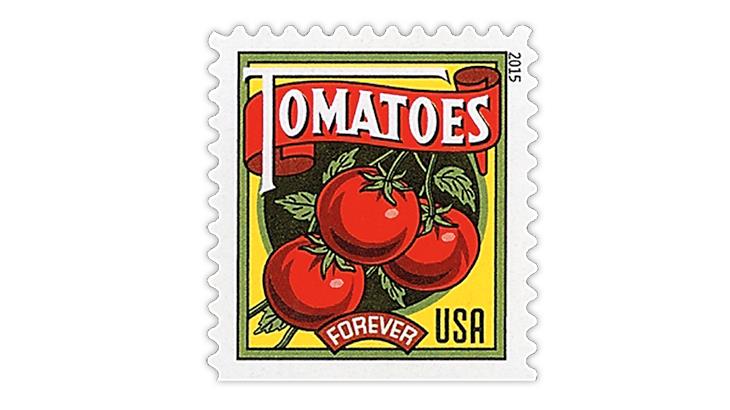 The 2015 Summer Harvest set of four also depicts fruits and vegetables, including tomatoes, which appear on one stamp in the new set. 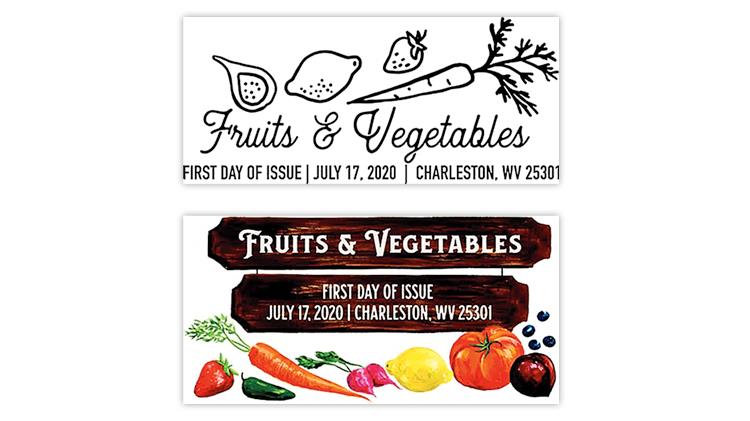 Two different pictorial first-day cancels have been prepared to celebrate the 10 new Fruits and Vegetables forever stamps.
Previous
Next

The United States Postal Service is going back to the garden for its next set of forever stamps.

The Fruits and Vegetables set of 10 nondenominated (55¢) stamps will be issued July 17 in a double-sided pane of 20, which the Postal Service identifies as a booklet.

Charleston, W.Va., has been selected as the official first-day city for this issue, but no public first-day ceremony has been announced. The Postal Service has canceled plans for several stamp ceremonies this year in response to the COVID-19 pandemic.

All are popular food items consumed by American families and found in grocery stores and other markets across the country.

Many of these, including carrots, tomatoes, strawberries and eggplants, are easily grown in family gardens, while other items, such as blueberries and grapes, are commonly cultivated on larger farms and orchards.

Although figs are native to Middle Eastern and Mediterranean locales, they have been successfully grown in California and other U.S. regions since the beginning of the 20th century.

Good Housekeeping has reported that “More than 200 fig cultivars grow in North America with a broad range of fruit shapes and colors.”

According to the Postal Service, Papp found inspiration for his paintings in historical still-life traditions.

“After sketching his subject, he transferred the drawing to canvas mounted on hardboard,” the Postal Service said. “Working in oil, he underpainted in burnt umber and then added color, slowly building up to the desired opacity and intensity.”

Papp uses real fruits and vegetables as his models, referring to photographs of his still-life compositions when necessary.

His artwork depicting fruits and vegetables regularly appears on the cover of the popular cooking magazine Cook’s Illustrated.

The Postal Service has often turned to items from the garden as individual stamp subjects, and it has depicted produce and garden flowers on many of its definitive stamps issued in recent years.

In 2015 the Postal Service issued a set of four Summer Harvest forever stamps (Scott 5004-5007) that also feature fruits and vegetables, including tomatoes, which appear in the new set as well.

Chili peppers, beans, sunflowers and seeds, squashes and corn are depicted on the Crops of the Americas set issued in 2006 in coils, folded pane booklets and double-sided panes (Scott 4003-4017).

The Postal Service has also revealed artwork for two pictorial first-day cancels for the new Fruits and Vegetables definitives.

The black postmark shows simple line drawings of a fig, a lemon, a strawberry and a carrot.

Eight different produce items are shown on the color postmark, including a couple (a pepper and a pair of radishes) that are not depicted on the new stamps.

Use of U.S. Fruits coils on 2019 mailing sets new record