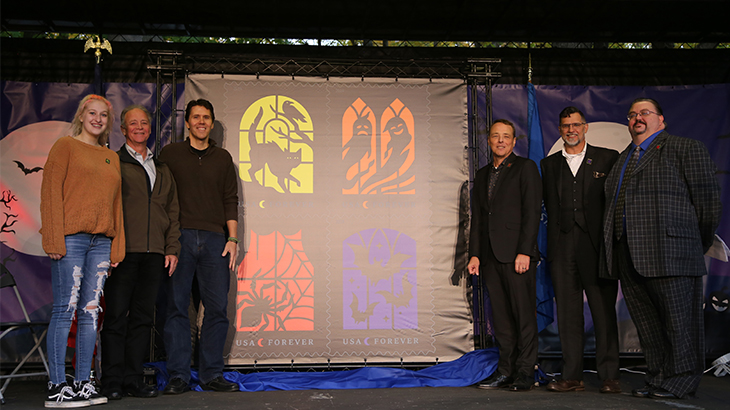 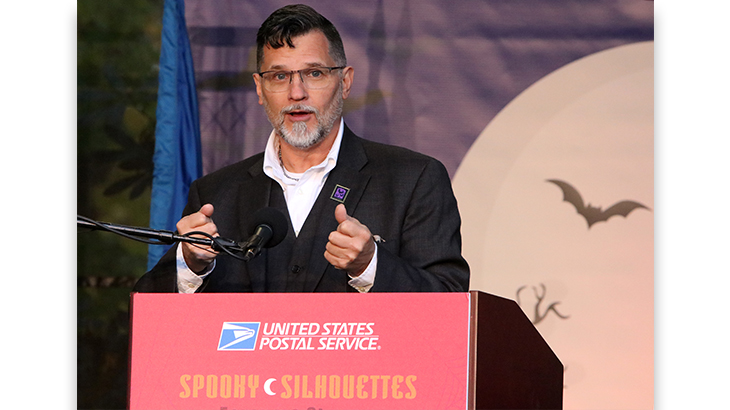 Storyteller Simon Brooks captivates the audience with an old English tale set in a haunted house. 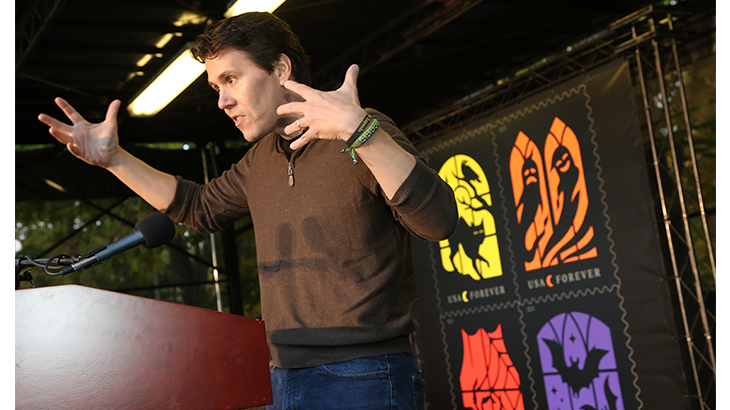 Jeff Belanger is the Emmy-nominated host, writer, and producer of the New England Legends series on PBS and Amazon Prime.
Previous
Next

The 30th annual festival provided a charming location. The stage was dressed with fall mums, and pumpkins were decorated with the four stamp images.

Mark Bender, Milford’s town administrator, expressed gratitude to the U.S. Postal Service and urged everyone to check out the festival’s haunted trail and enjoy the available food and drink.

Marc McCrery, vice president of mail entry and payment technology for the USPS, was the dedicating official. He unveiled the four images of the nondenominated (55¢) stamps and noted that they contain an iridescent effect.

In the spirit of Halloween, storyteller Simon Brooks recounted an old English tale about a boy’s attempt to spend the night in a haunted house to win a bet. After getting settled in the house, Brooks said the boy wrapped himself in his blanket and began to read a book.

“As he started to read it — in this so-called haunted house — he realized he brought the wrong material,” he said. “Reading ghost stories in a haunted house probably wasn’t the smartest thing to do.”

“A better book might have been a book of jokes, or the history of the Postal Service,” Brooks quipped.

Also featured was Jeff Belanger, host and producer of New England Legends and the writer and researcher for 15 seasons of Ghost Adventures on the Travel Channel.

The paranormal expert spoke about the first Halloween, roughly 2,000 years ago in Ireland.

“The Celtic people believed that on Oct. 31, the veil between the world of the living and world of the dead is at its thinnest,” Belanger said. “And the goddess Morrigan would come through with hoards of ghosts and monsters and nymphs and fairies into our world, and meddle in our affairs.”

The Celts, in turn, had bonfires, left out food offerings, and dressed their children as ghosts and monsters in hopes that the creatures would not take the kids back to the world of the dead.

Today, Belanger continued, the Halloween tradition continues all over the world.

“Collectively, we have made this the second biggest consumer holiday behind Christmas,” he said. “Well done all of you!”

The event was emceed by Matt Burdette, editor-in-chief of The Telegraph in Nashua, N.H. Manya Ziemiecki, sophomore vocalist at Milford High School, sang the national anthem.

Plan ahead and create a Halloween philatelic treat