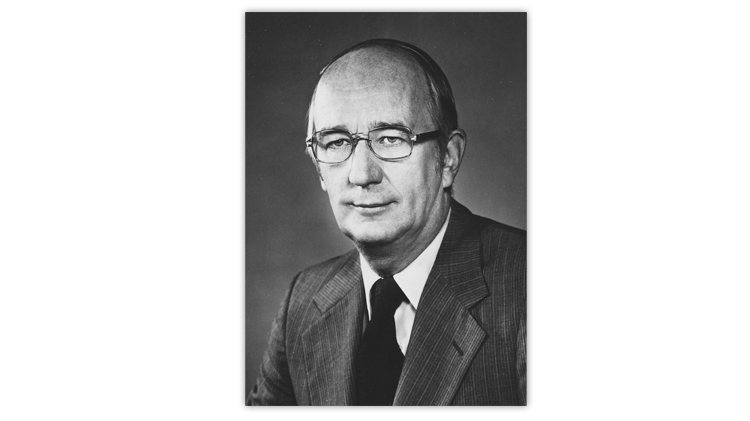 Former United States Postal Service Assistant Postmaster General Gordon C. Morison, 90, died May 5. He was well-known and highly regarded among philatelists in the United States, and around the world.

He was active in philately from an early age, and he would eventually serve with numerous philatelic groups, beginning with the Rochester (N.Y.) Philatelic Association and continuing with the United Postal Stationery Society, the American Philatelic Society and more. He had significant involvement in many national and international stamp shows throughout his life.

In 1971, Mr. Morison joined the U.S. Post Office Department just before it became the U.S. Postal Service, a semi-independent federal agency. Beginning as head of the philatelic affairs division, he would eventually rise to become the assistant postmaster general of philatelic and consumer affairs, the position he held when he retired in 1992. During that time, he would oversee tremendous growth in the importance of the U.S. stamp program and all USPS customer, commercial and retail sales and services.

Among his many notable achievements with the Postal Service are the expansion of its participation in national and foreign stamp shows; promotion of stamp collecting to young children through the Benjamin Franklin Stamp Clubs and other initiatives; innovations in postal marketing, including open merchandising and displays to attract collectors and customers; and the sale of stamps through other channels such as ATMs, grocery stores and other nonpostal retail locations.

When he joined the USPOD in 1971, philatelic revenue was roughly $20 million. By the time he retired in 1992, that number had increased well beyond $200 million.

Many innovations would mark the U.S. stamp program during his tenure. Stamp designs and printing became more colorful and of higher quality. Self-adhesive stamps were reintroduced to great success.

He oversaw the development of many popular series of stamps, including the engraved Americana, Great Americans and Transportation series; the Black Heritage series; and the American Music series. The 1993 29¢ Elvis stamp would not be issued until after he retired.

He introduced the concept of nondenominated stamps to solve the problem of stamp shortages during rate changes, many with little time to respond with denominated postage. And he began exploring additional printing options with private security printing companies so the USPS would be in a better position to address unforeseen contingencies. Those companies have since replaced the Postal Service’s reliance on a single government printer.

He introduced the concept of printing additional descriptive text in the margins and selvage of stamp panes and on booklet covers, both for information and marketing benefits. He also directed the creation of the plate position diagrams on stamp sheets, when it became apparent that the move to private printers would result in press sheets that went beyond the longtime standard of four plate positions.

He pushed the Postal Service to accept credit cards, first for philatelic mail-order transactions and eventually for postal retail transactions (a transformation that would not be completed until shortly after he retired). He was also successful in getting USPS funding for many important philatelic initiatives, from the plans for the Smithsonian National Postal Museum, to the hobby-promoting Council of Philatelic Organizations, to major international stamp shows in the United States.

During his tenure, he oversaw increasing USPS participation in international stamp shows held in the United States, including Interphil in 1976 and Ameripex in 1986. He created a highly successful USPS-sponsored international show, World Stamp Expo 1989, to coincide with the Universal Postal Union Congress hosted by the United States that year in Washington, D.C.

It was no surprise when Mr. Morison was named executive director of Washington 2006, the international stamp show hosted by the United States in Washington, D.C.

Mr. Morison received many philatelic accolades over the years. The Collectors Club honored him in 1999 with the Alfred F. Lichtenstein Memorial award for distinguished service to philately, calling him “the most pro-collector official that the USPS has ever had.” In 1984 he received the APS John N. Luff award for exceptional contributions to philately. He received the Smithsonian’s Philatelic Achievement award in 2008, and in 2006 the U.S. Philatelic Classics Society presented him with its Distinguished Philatelist award.

His collection of Iceland postal cards — his specialty — won the grand prix national at the Nordia 2001 show.

Mr. Morison was born July 1, 1930, in Sayre, Pa. He began collecting at age 16, and he was initially most associated with the Rochester Philatelic Association — serving twice as the association’s president — and the Niagara Frontier Federation of Stamp Clubs.

On the national stage, he served as chairman of the APS annual convention in 1968, which introduced the first World Series of Philately Champion of Champions competition. He successfully persuaded the APS to assume responsibility for that annual competition, which has continued to this day.

Mr. Morison graduated from Syracuse University and received a master’s degree in economics from Duke University. He initially worked in a number of communications-related fields in New York before joining the USPOD in 1971.

He married Mary Vivian and had two children, Keith Alan and Linda Diane. Mary was a respected philatelist in her own right and was also known to many in the hobby community.

Mary Vivian Morison pre-deceased her husband in 2002. The Gordon and Mary Morison Pavilion at APS headquarters in Bellefonte, Pa., was dedicated in her honor in 2007.

Funeral services were to be held May 13 in Potomac, Md., Mr. Morison’s home for many years. Memorial contributions may be made to the American Philatelic Society, 100 Match Factory Place, Bellefonte, PA 16823.

On a personal note, I knew Mr. Morison for more than 40 years, and I worked for him at USPS Headquarters for eight years. I always regarded him as a good friend and mentor.

In other recent tributes I have read, Mr. Morison is called a “true gentleman.” Indeed, he was a true gentleman in every sense.