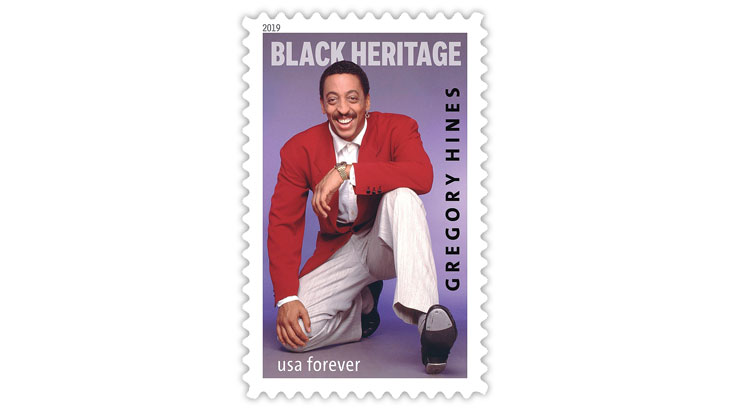 Gregory Hines, a leading entertainer in dance, film and theater, will be celebrated Jan. 28 on a new commemorative forever stamp. 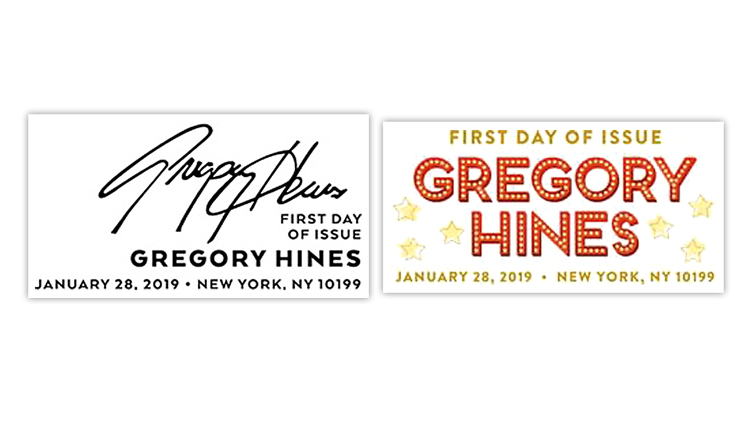 The U.S. Postal Service has created two first-day cancels for the Jan. 28 Gregory Hines stamp. The black cancel shows his signature, and the color cancel depicts his name in lights.
Previous
Next

Though known as the leading tap dancer of his generation, Hines was also an accomplished and celebrated actor, as well as a singer, musician, film director and producer.

The event is free and open to the public, but those attending are encouraged to register in advance at www.usps.com/gregoryhinesblackheritage.

The vignette on the vertical commemorative is a 1988 color photograph by Jack Mitchell that pictures Hines wearing a red blazer and gray slacks and smiling broadly. Resting on his right knee, Hines has his left leg extended with the foot raised to display the tap plates on the bottom of his shoe.

Hines’ name is printed in black reading up along the right edge of the design, and the words “Black Heritage” are lettered across the top.

The stamp is the 42nd issue in the Black Heritage series, which began in 1978 with a 13¢ stamp honoring abolitionist Harriet Tubman.

While the stamp series has honored individuals from all walks of life, last year’s honoree, Lena Horne (Scott 5259), was also a gifted dancer, singer and entertainer.

The Gregory Hines stamp was designed by USPS art director Derry Noyes. It will be issued in panes of 20.

Gregory Oliver Hines was born Feb. 14, 1946, in New York City and began dancing professionally at age 5, sharing the stage with his brother Maurice, who was two years older.

Though he started as a dancer, Hines branched out to start a jazz-rock band, Severance, in the 1970s — a short-lived effort that led him to stage acting soon after.

Featured in the musical Eubie on Broadway, Hines secured a Tony nomination in 1979, the first of several. He finally won the 1992 Tony award for best actor in a musical as the star of Jelly’s Last Jam.

He made his film debut in the 1981 Mel Brooks comedy History of the World Part I as the resourceful slave Josephus. He quickly moved to starring roles, dancing in the 1985 drama White Nights opposite Mikhail Baryshnikov, and setting his dance shoes aside for the 1986 buddy cop comedy Running Scared with Billy Crystal.

That same year he would also record There’s Nothing Better than Love, a duet with Luther Vandross that reached No. 1 on the Billboard Hot R&B Singles chart.

Throughout the last two decades of the 20th century, Hines was the familiar face of tap, frequently performing and promoting the art form and featuring in historical productions and documentaries that celebrated the world of dance. In 2001 he starred as tap-dancing icon Bill “Bojangles” Robinson in Bojangles, a Showtime television biography.

Hines was a tap-dancing innovator universally respected for his versatility. In a biography for the New York Public Library, Constance Valis Hill wrote that Hines “was a generous artist and teacher, conscious of his role as a model for such tap-dance artists as Savion Glover, Dianne Walker, Ted Levy, and Jane Goldberg.”

As a child, actress Shirley Temple tap-danced with Robinson in the 1935 film The Little Colonel. She was featured on the last Legends of Hollywood stamp issued to date, a forever stamp from 2016 (Scott 5060).

Hines was an esteemed talent who not only breathed new life into a dance genre, but also entertained with his exceptional wit, grace and style.