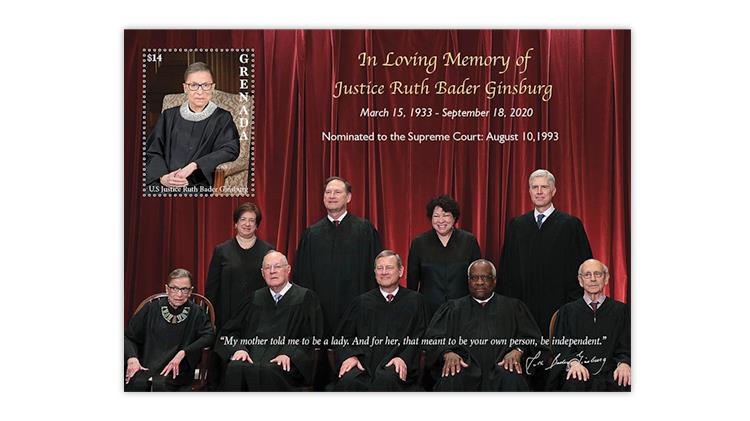 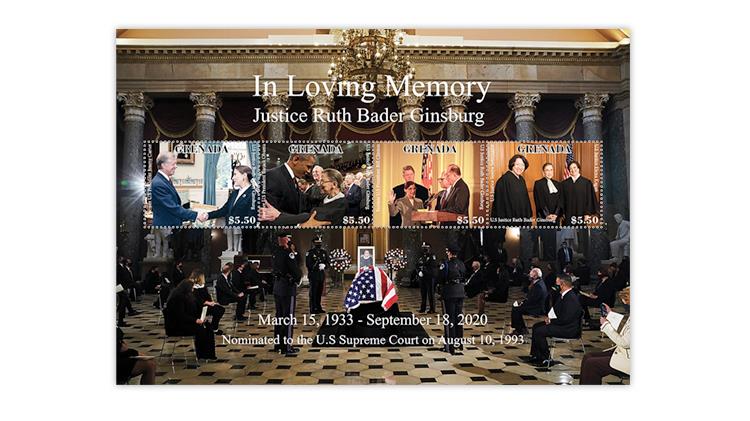 Inter-Governmental Philatelic Corp. of Brooklyn, N.Y., announced the two souvenir sheets in a press release sent by email Oct. 29. Often referred to as IGPC, this new-issue agency represents the Caribbean island nation of Grenada and approximately 70 other government clients.

The press release said of Ginsburg: “She paved the way for women in law across the globe. She advocated for the civil liberties of all Americans. She was an Associate Justice of the Supreme Court of the United States. She was Ruth Bader Ginsburg, a legal legend and an inspiration to many.”

The release also mentioned that for decades Grenada has shared a strong bond with the United States.

One of the two souvenir sheets contains a single $14 stamp showing a photograph of a seated Ginsburg wearing her black judicial robes and a white crochet collar. The same photograph appears in her biography on the website of the Supreme Court of the United States.

The selvage of this sheet features Ginsburg’s quote, “My mother told me to be a lady. And for her, that meant be your own person, be independent,” superimposed on a group photograph of Ginsburg with eight of her fellow Supreme Court justices: (standing from left to right) Elena Kagan, Samuel A. Alito Jr., Sonia Sotomayor and Neil M. Gorsuch and (seated from left to right) Ginsburg, Anthony Kennedy, John G. Roberts Jr., Clarence Thomas and Stephen G. Breyer.

The press release from IGPC describes the four stamps as overlaying “a photograph of Justice Ginsburg’s coffin lying in state in the National Statuary Hall, the first female to lie in state in the U.S. Capitol Building.”