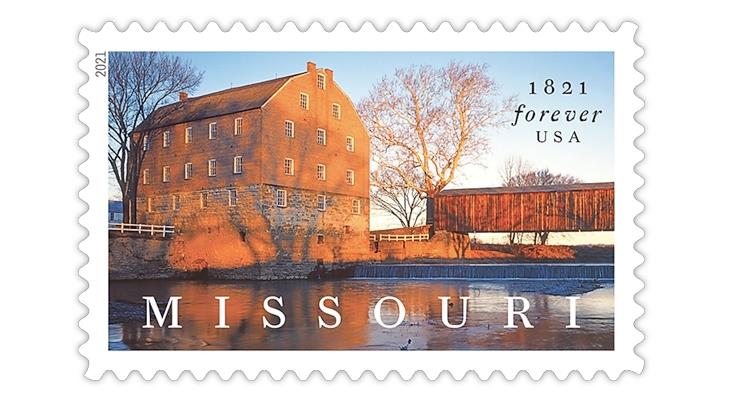 The United States Missouri Statehood forever stamp will be issued Aug. 10 to commemorate the 200th anniversary of Missouri joining the Union. The stamp illustration is a photograph from Bollinger Mill State Historic Site. 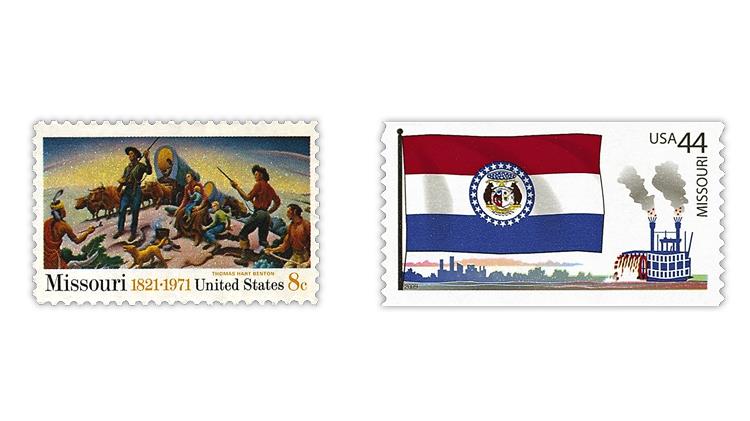 The 150th anniversary of Missouri statehood was commemorated with an 8¢ stamp issued in 1971. Other stamps have also paid tribute to the state, including the 44¢ Missouri Flag coil stamp issued in 2009 as part of the Flags of Our Nation series. 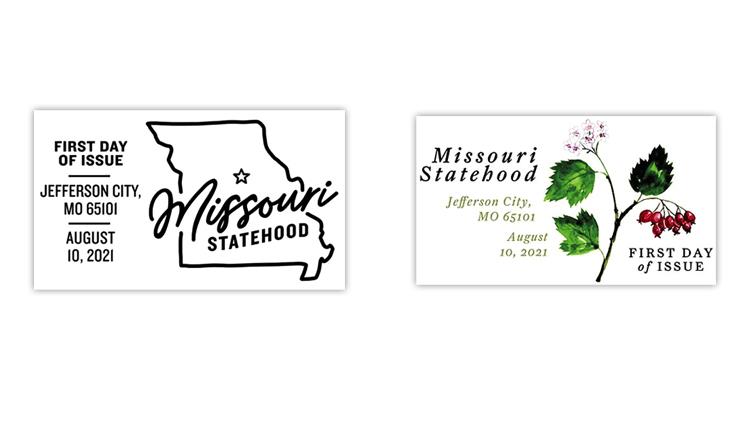 Pictorial first-day cancels for the Missouri Statehood stamp show an outline map of the state with a star designating the capital, Jefferson City, and a branch representing the state tree, the flowering dogwood.
Previous
Next

The first-day ceremony for the nondenominated (55¢) stamp will take place at 9 a.m. Central Time at the Missouri State Capitol, 201 W. Capitol Ave., in Jefferson City.

Advance registration for the event is found on the Postal Service’s website. The website advises that registration does not guarantee a seat.

The stamp event is part of a 90-minute program that includes remarks by Gov. Michael L. Parson and others recognizing the Missouri bicentennial.

The stamp design uses a photograph by Charles Gurche taken at Bollinger Mill State Historic Site. The scene on the Whitewater River shows the Burfordville covered bridge, Missouri’s oldest covered bridge and one of four in the state, and a grist mill that dates to the Civil War.

The scenic area is in western Cape Girardeau County, in the southeastern part of the state.

The name Missouri is spelled out on the stamp using capital letters in dropout white along the bottom of the photograph. Black text at upper right reads “1821” (the year statehood was proclaimed), “forever” and “USA.”

Designed by USPS art director Greg Breeding, the Missouri Statehood stamp is offset-printed in panes of 20 by Banknote Corporation of America on the Gallus RCS press.

According to the USPS retail catalog, USA Philatelic, the stamp will also be sold in uncut press sheets consisting of six panes, both with the die cuts that normally separate individual stamps, and without die cuts.

Recent press sheets have been offered in limited quantities, with many selling out on the day of issue.

Missouri achieved statehood on Aug. 10, 1821, exactly 200 years before the issue date of the new stamp.

However, it was more than 18 years earlier, in 1803, that the United States obtained what is now Missouri from France as part of the Louisiana Purchase of approximately 827,000 square miles of territory.

Later efforts to grant Missouri statehood evolved into fierce debates among lawmakers on the question of slavery. The Missouri Compromise, passed by Congress in 1820, admitted Maine into the Union as a free state and established that Missouri would be admitted as a slave state.

Slavery was abolished in Missouri during a state convention vote on Jan. 11, 1865.

The 24th state in the Union, Missouri today consists of nearly 70,000 square miles in area and a population of more than 6.1 million residents.

The state’s eastern border is almost entirely shaped by the Mississippi River as it stretches down between Missouri’s southern neighbors, Arkansas and Tennessee.

Centrally located in the nation, Missouri also borders Oklahoma, Kansas and Nebraska to the west, Iowa to the north, and Illinois and Kentucky to the east.

“With 91 state parks and historical sites and hundreds of conservation areas, Missouri has an abundance of places to enjoy hiking, camping, fishing and other activities,” according to the Postal Service. “It boasts world-renowned public gardens, world-class museums, several National Historic Trails, and professional sports teams including baseball, football, soccer and ice hockey.

“Missouri is home to great food and great music. Some of the country’s best blues music is performed in concerts and clubs across the state. Whether it is Kansas City or St. Louis-style, Missouri is famous for its barbecue.”

Past representations of Missouri on United States stamps include an 8¢ stamp in 1971 marking 150 years of statehood with a detail of Missourian Thomas Hart Benton’s painting Independence and the Opening of the West (Scott 1426).

A 44¢ commemorative coil stamp issued in 2009 as part of the Flags of Our Nation series shows the Missouri state flag and the familiar sight of a paddle wheeler on the river (Scott 4301).

The black postmark (applied without a fee to most collector-supplied prepared covers) shows an outline map of the state with a star designating the location of Jefferson City.

The color postmark shows a branch of the dogwood, Missouri’s state tree.