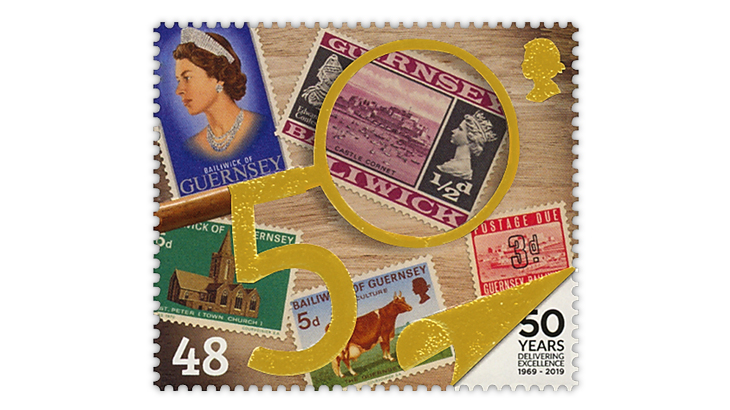 Figure 1. In celebration of its 50th anniversary of postal independence, Guernsey Post issued a set of stamps Oct. 1 featuring stamp-on-stamp designs. One of the stamps from Guernsey’s 1969 first issue is shown under the magnifying glass on the new 48-pen 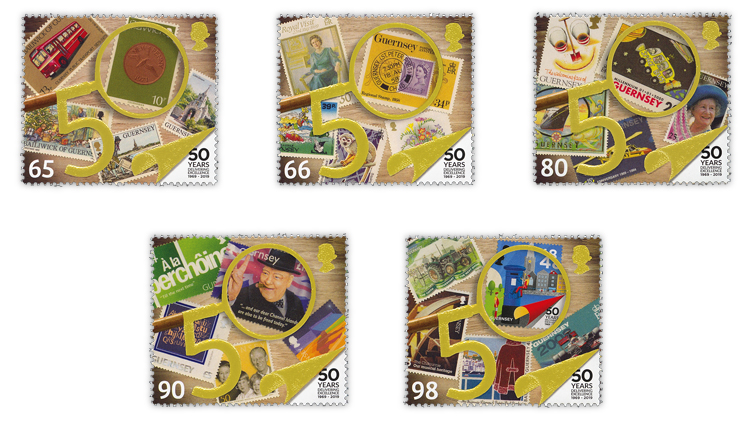 Figure 2. Guernsey stamps from 1971 through 2019 are pictured on the other five stamp-on-stamp designs in the new issue from Guernsey Post. 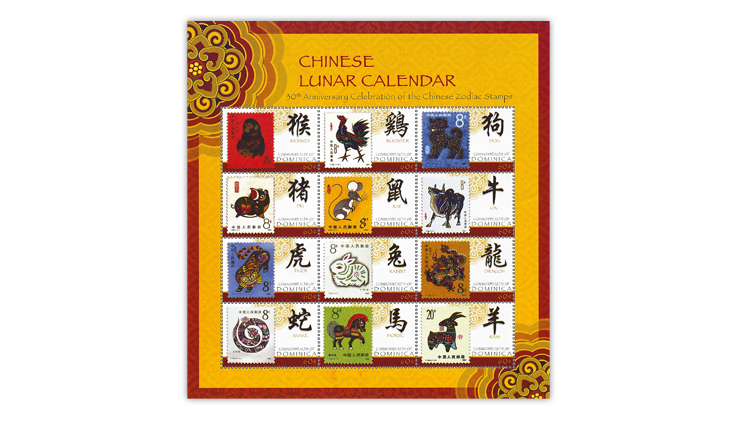 Figure 3. A pane of 12 from Dominica shows stamp-on-stamp designs of stamps from China.

Figure 4. Guernsey Post issued new stamp-on-stamp designs in panes of 10 with additional information in the selvage. The 90-penny pane is shown. 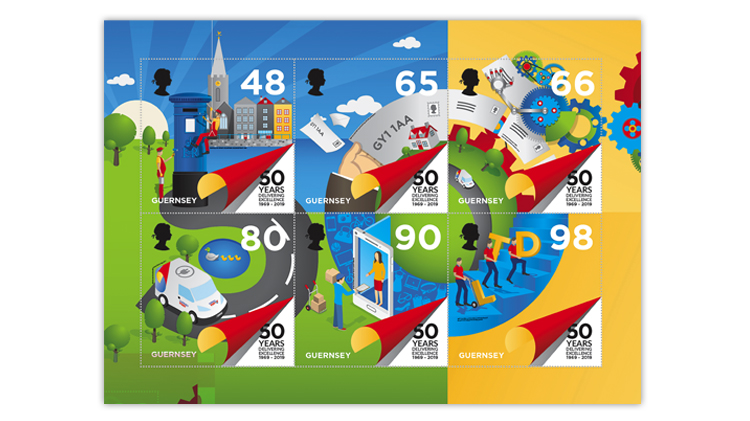 Figure 5. Postal operations are highlighted on another set of six stamps issued by Guernsey Post Oct. 1 to commemorate 50 years of postal independence. Each stamp includes microtext detailing the subject portrayed. These stamps were produced in panes of 1 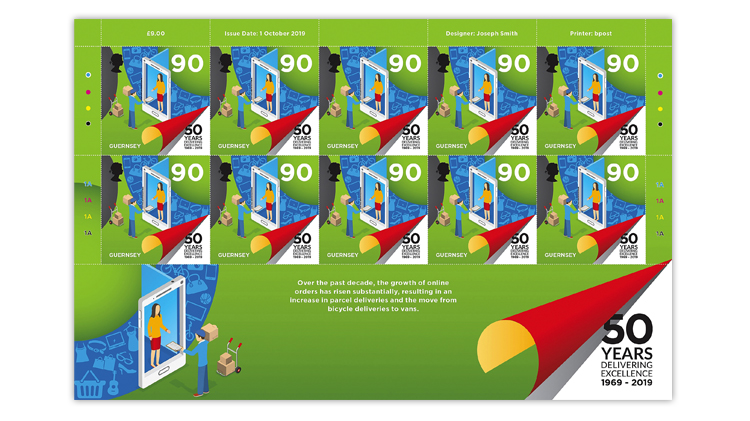 Figure 6. The 90-penny stamp from Guernsey’s Postal Operations set represents the influence of the growth of online orders on the postal service. According to the inscription on the pane of 10, this growth has resulted in an increase in parcel deliveries
Previous
Next

One set focuses on developments in postal operations, and the other set depicts stamp-on-stamp designs of Guernsey’s stamps from the past 50 years. In a press release, Guernsey Post calls the sets Postal Operations and Philatelic Stamps — A Collector’s Story, respectively.

Each set includes six stamps (48 pence, 65p, 66p, 80p, 90p and 98p) produced in separate panes of 10. The Postal Operations stamps were also issued in a souvenir sheet with the six different designs se-tenant (side by side).

In addition, the Postal Operations set includes a little something extra: microtext on each stamp. This is a first for Guernsey Post.

In contrast, I feel that something is missing from the Philatelic Stamps set: There is no inscription with the name of the bailiwick.

The Bailiwick of Guernsey includes the islands of Guernsey, Alderney, Sark, Herm, Jethou and Lihou. Following the establishment of the British General Post Office as a public corporation on Oct. 1, 1969, the post office of the bailiwick of Guernsey became a separate entity, and British postage stamps ceased to be valid. The island began to design and produce stamps through its own philatelic bureau.

One of the first stamps issued Oct. 1, 1969, is shown under the magnifying glass on the 48p stamp in the Philatelic Stamps set, pictured in Figure 1. The ½-penny stamp from 1969 (Scott 8) depicts Queen Elizabeth II on the right, Edward the Confessor on the left, and a scene of Guernsey’s Castle Cornet in the center.

The 3d postage due stamp in the lower right of the stamp-on-stamp design (Scott J3) also was issued Oct. 1, 1969. The other three stamps depicted on the 48p stamp were issued in 1977 to celebrate the silver jubilee of the accession of Queen Elizabeth, and in 1970 for Christmas (church) and as part of a Gardening and Agriculture set (cow).

When looking at this and the other five stamps in the set, shown in Figure 2, I wondered why the name of the bailiwick was not included as part of the basic design. On other stamps from Guernsey, the name appears prominently. For example, on each of the six stamps in the Postal Operations set the name “Guernsey” is inscribed in the lower left corner.

My questions about the missing “Guernsey” on the Philatelic Stamps set led to an email exchange with Bridget Yabsley, the head of philately for Guernsey Post.

In the first email, I asked her why the bailiwick’s name was not clearly printed on the stamp designs.

She quickly replied: “We did not put Guernsey on the Philatelic set of stamps as the country name appears on every stamp featured within each stamp. It was deemed unnecessary to add it again.”

In follow-up emails, I asked Yabsley if people looking at the stamps could possibly mistake them as being issued by another country. For example, the stamps could have been issued by Great Britain’s Royal Mail to honor the Guernsey anniversary.

I also pointed out that some countries have issued stamp-on-stamp designs featuring stamps of other countries. Figure 3 shows an example from Dominica. This pane of 12 stamps issued Jan. 4, 2010 (Dominica Scott 2726A), shows images of stamps from the People’s Republic of China picturing the animals of the Chinese zodiac.

Yabsley told me that it is not possible for Royal Mail or the postal administration of a British Commonwealth country to use an image of a stamp from Guernsey as part of its design without the permission of the queen.

She agreed that a non-Commonwealth country could possibly include a Guernsey stamp as part of a stamp-on-stamp design but added: “I can see no reason why any country would want to do so. The example you have given [the Dominican pane of 12] is probably the only theme that would be considered by other postal administrations as the Chinese New Year is covered by so many countries worldwide, including Guernsey!”

All of the stamps in this set are from the private collection belonging to Doric Sarre of Guernsey. Sarre began collecting stamps when he was 10 years old, and his collection of Guernsey is complete from 1969 to date.

Two Degrees North, the firm that designed the stamps, had access to Sarre’s complete collection and decided to select issues from key dates over the decades.

The stamp shown under the magnifying glass on the 65p stamp was issued Feb. 13, 1979, part of a set featuring coins. The other stamps pictured in this stamp-on-stamp design were issued in 1979 to mark the 100th anniversary of publication transportation, in 1982 to celebrate Christmas, in 1984 to commemorate Gen. John Doyle, and in 1985 to show the Little Chapel.

Also pictured on the new 66p stamp is a 1989 commemorative marking the royal visit of Queen Elizabeth, a 1992 Operation Asterix stamp, a stamp from the 1989 set honoring the Zoological Trust of Guernsey and animals of the rainforest, and a stamp from the Flowers definitive issue of 1992.

On Jan. 1, 2000, Guernsey saluted the new millennium with stamps picturing children’s designs. The 20p denomination from that set is under the magnifying glass on the new 80p stamp.

Featured on the new 90p stamp is a £1.50 Winston Churchill stamp issued in 2005 to mark the 60th anniversary of Guernsey’s liberation from German occupation during World War II.

Other stamps displayed are a 2008 stamp from a set featuring Guernesiais phrases, a 2003 Alphabet stamp, a 2007 stamp celebrating the 60th wedding anniversary of Queen Elizabeth and Prince Philip, and a 2003 Island Games commemorative.

Figure 4 shows the pane of 10 of the 90p stamp. Included in the selvage are the issue date; the designer’s name, Two Degrees North; and the printer’s name, Southern Colour Print. A large image of the Churchill stamp also is depicted.

The stamp under the magnifying glass on the 98p denomination is not an old one, but is very fresh as it was issued on the same day. It is the 48p stamp from the Postal Operations set.

The other four stamps in this stamp-on-stamp design mark the 100th anniversary of the West Show in 2013; depict a chifournie, an instrument similar to the hurdy-gurdy, in 2014; honor the novel The Guernsey Literary and Potato Peel Pie Society in 2011; and salute race car driver Lewis Hamilton as part of the British F1 World Champions series in 2011.

The Postal Operations souvenir sheet is shown in Figure 5. Microtext is hidden in a different location on each stamp. This tiny text gives a brief description of what is commemorated on the stamp.

For example, the design of the 48p stamp represents the repainting of Guernsey’s red mailboxes to blue in 1980, in line with Guernsey Post’s new branding and image.

The microtext, located under the row of buildings and near the leg of the painter sitting on scaffolding, reads, “Guernsey Post rebrand and postboxes are painted blue in 1980.”

Postal automation is the theme of the 66p stamp. In the design, the microtext “Automation introduced in 2003, latest sorting machines installed in 2014” is written in two lines at the bottom of the symbolic envelope in the center under the cogwheel.

The design of the 80p denomination shows an electric postal van driving near a pond where a duck and three ducklings are swimming. The design is explained by the microtext “Electric vans introduced to vehicle fleet in May 2017,” which is located behind the electric van.

Several items are depicted on the 90p stamp, including a bicycle, a ball and a belt. The main part of the design, however, shows a parcel being delivered to a woman standing inside a cell phone. The microtext, located on the left side of the phone’s frame, reads, “Internet ordering explosion increase parcel deliveries.”

Further information about the stamp’s subject is found in the lower selvage of the pane of 10, shown in Figure 6, “Over the past decade, the growth of online orders has risen substantially, resulting in an increase in parcel deliveries and the move from bicycle deliveries to vans.”

The name of the designer of the Postal Operations set, Joseph Smith, appears in the upper selvage, as does the name of the printer, Belgium’s bpost.

The last stamp in the set, the 98p denomination, shows postal workers climbing stairs and carrying the letters “L” “T” and “D.” The microtext is set under the lowest stairstep and reads: “2001 Post Office commercialised, Guernsey Post Ltd move to new headquarters at Envoy House.”

In 2001, the post office was incorporated as Guernsey Post Ltd. and moved to its new headquarters at Envoy House.

Guernsey Post also issued an uncut imperforate souvenir sheet in a limited edition of 500 sheets selling for £15 per sheet.