Gumming up the works: yellow sticky notes on mail 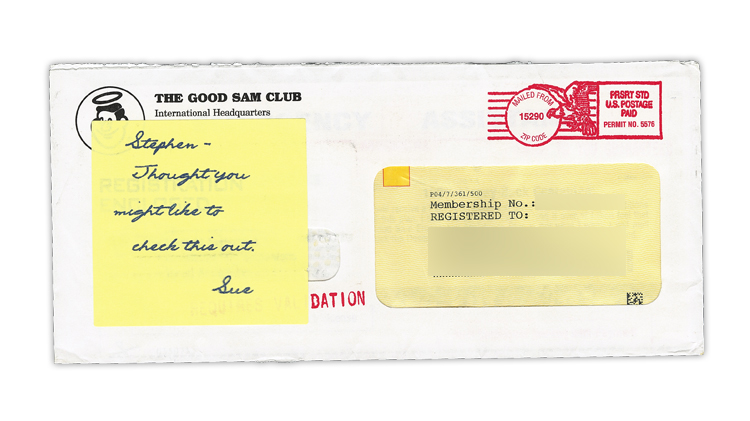 This March 2005 commercial mailing has a sticky note attached. The United States Postal Service approved the use of these notes, called “direct mail repositionable notes” in 2003. Are they still permitted? The author has not seen another example in more t

Some ideas seem good when proposed but in practice turn out to be less than stellar.

An example is shown above: a sticky note attached to an advertising mail cover sent in March 2005. The United States Postal Service named this product “direct mail repositionable notes” (DMRN) and formally approved it in 2003 for use by direct mailers (advertisers) on “first class and standard mail letter-size automation compatible mail pieces that meet certain qualifying requirements.”

According to an April 2, 2003, press release from Postal Service headquarters in Washington, D.C., “Research and live-mail testing have shown that through the use of repositionable notes advertisers can significantly increase their response rates by as much as 37 percent, making advertising mail an even more valuable medium.”

The idea was that the direct mail repositionable note would catch the customer’s attention quickly, increasing opening, reading and response rates. It did not cost the mailer anything extra so far as postage.

From my vantage point this might work fine when the mailer has applied postage that does not need to be canceled, but mail that needs to be canceled could cause problems. Because the note is only partially attached at the sticky edge, anything that has to go through a canceling machine could catch on the equipment and gum up the works, so to speak.

I also think that perhaps this would not work well in automated ZIP code sorting machines.

I receive lots of advertising mail and can testify that it has been at least several years since I have seen any examples of an attached direct mail repositionable note.

What I have seen is reproductions of these notes printed directly on the envelopes. This leads me to suggest that the USPS might have withdrawn its approval of the direct mail repositionable note method.

If I am wrong and a Linn’s reader can provide a recent direct mail repositionable note example, I would be happy to do a follow-up on this subject. I can be contacted by email at jmhstamp@verizon.net or by mail at Box 1125, Falls Church, VA 22041-0125.

What is the tiny printing in the delivery address area of these advertising covers?