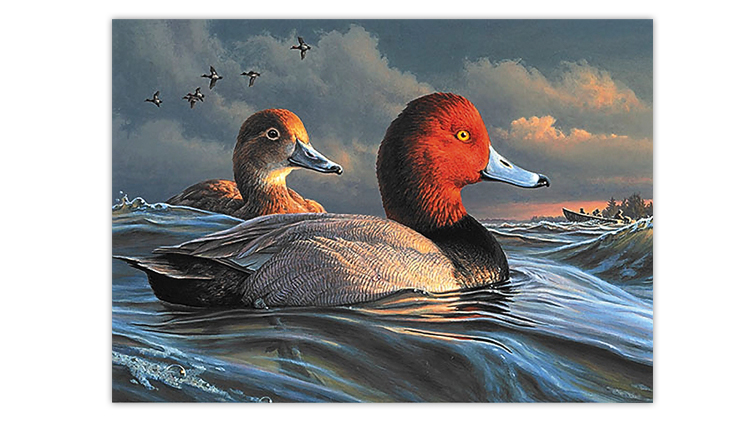 The United States Fish and Wildlife Service announced Sept. 26 that James Hautman of Chaska, Minn., was selected as the winner of the 2021 federal duck stamp art contest that was held online Sept. 24-25. This was the second year the contest was held virtually because of the COVID-19 pandemic.

Hautman’s acrylic painting of a pair of redheads floating in water will appear on the duck stamp that is scheduled to be issued sometime in late June 2022, the Fish and Wildlife Service said. This is Hautman’s sixth win in the annual contest.

Of 137 entries submitted to this year’s competition, 14 entries (including Hautman’s) made it to the final round of judging. Eligible species for this year’s duck stamp contest were the greater white-fronted goose, Ross’s goose, blue-winged teal, king eider and redhead.

The Hautman brothers — James, Joseph and Robert — have collectively won the duck stamp art contest a record 14 times. Robert notched the most recent win; his painting of a pair of mallards in flight appears on the 2018 $25 duck stamp (Scott RW85). The 2017 $25 duck stamp features James’ painting of Canada geese (RW84).

Since it was established in 1934, sales of the federal duck stamp to hunters, bird watchers, outdoor enthusiasts and collectors have raised more than $1 billion to conserve over 6 million acres of habitat for birds and other wildlife and provide countless opportunities for hunting and other wildlife-oriented recreation on public lands in the United States.