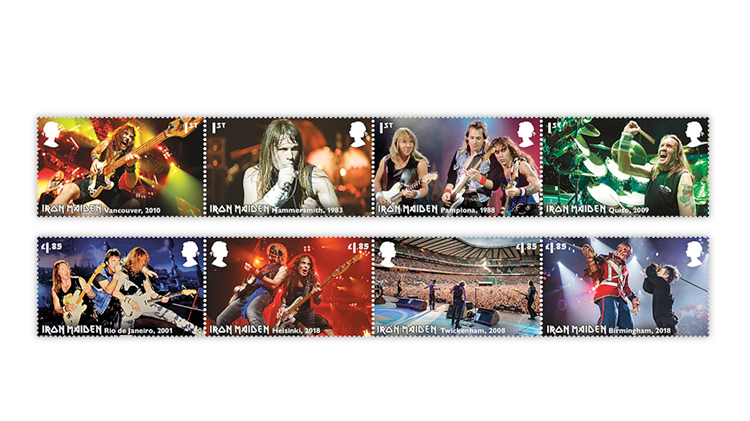 Presented in two strips of four, eight stamps in Britain’s Iron Maiden set feature scenes from concert performances around the world. Iron Maiden has made more than 2,000 live performances in 64 countries.

Royal Mail’s first commemorative stamps of 2023 appear as a set of eight stamps in two strips of four with se-tenant (side-by-side) designs. Four additional stamps are in a souvenir sheet.

A presentation pack included with the stamp issue explains the background and significance of Iron Maiden, the music group Royal Mail calls “one of the most revered and influential bands of all time.”

“With over 100 million record sales, more than 2,000 live performances in 64 countries and 17 studio albums to their name — including their latest, Senjutsu, released in 2021 — Iron Maiden have remained fearlessly creative, cheerfully indifferent to critics and fashions alike, and ferociously dedicated to their fans for almost 50 years,” the presentation pack said.

Royal Mail pulled images from eight of the band’s more than 2,000 live performances for the set of eight stamps, which feature all six current members of the band.

Four stamps in the set of eight are nondenominated first-class (currently 95 pence) stamps. One of these shows bassist Steve Harris in a photograph taken during a 2010 show in Vancouver, British Columbia, Canada.

Harris founded Iron Maiden as a teenager in 1975. Formed in east London, the band spent its early years playing shows in London’s East End. The band’s first recording came in 1978 with a lineup including Dave Murray, the band’s longest-serving member after Harris.

Murray can be seen on another first-class stamp in a photograph from a 1988 show in Pamplona, Spain, alongside Harris and fellow guitarist Adrian Smith.

Smith, a childhood friend of Murray’s, joined the band in 1980. A stamp denominated at £1.85 (the rate for letters to Europe up to 100 grams and worldwide up to 20 grams) shows Smith and Harris at a 2018 concert in Helsinki, Finland.

Smith left Iron Maiden in 1990, and guitarist Janick Gers joined the band as his replacement. When Smith rejoined in 1999, Gers remained, giving the band three guitarists.

Dickinson joined the band in 1981 and provided the vocals for The Number of the Beast, the band’s first album to top the United Kingdom albums chart and reach the top 40 of the U.S. Billboard 200. Like Smith, Dickinson left the band for much of the 1990s and rejoined the group in 1999.

Dickinson appears alone in a picture from a 1983 performance in the Hammersmith region of London, England, on a first-class stamp in the set of eight.

Drummer Nicko McBrain, pictured on a first-class stamp featuring a 2009 concert in Quito, Ecuador, joined the band in 1982, shortly after Dickinson’s arrival.

McBrain’s debut album with the band was 1983’s Piece of Mind, which reached No. 3 on the United Kingdom albums chart and No. 14 on the U.S. Billboard 200. The album celebrates its 40th anniversary in 2023.

McBrain’s perch from behind his drum set has undoubtedly provided him with views of the band and crowds such as the one shown on the £1.85 stamp picturing five band members performing in 2008 at London’s Twickenham Stadium, a venue with a capacity of 82,000.

A final £1.85 stamp in the set of eight shows a picture taken during a 2018 show in Birmingham, England, in which Dickinson engages in a sword fight with the band’s mascot, Eddie.