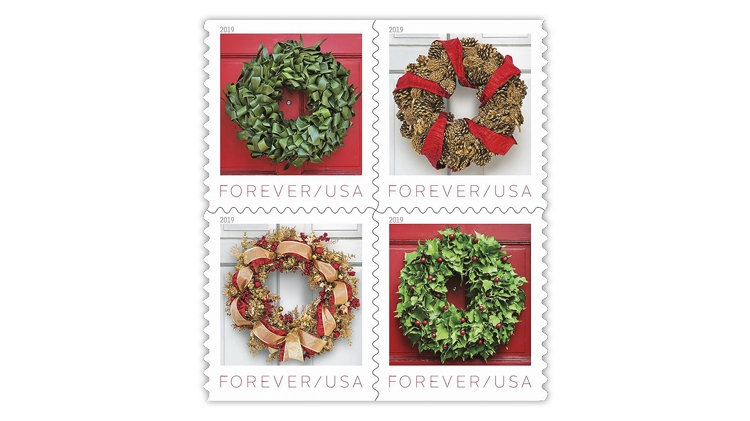 Four Holiday Wreaths forever stamps will be issued Oct. 25 in a double-sided pane of 20. The first-day ceremony will take place in Freeport, Maine. 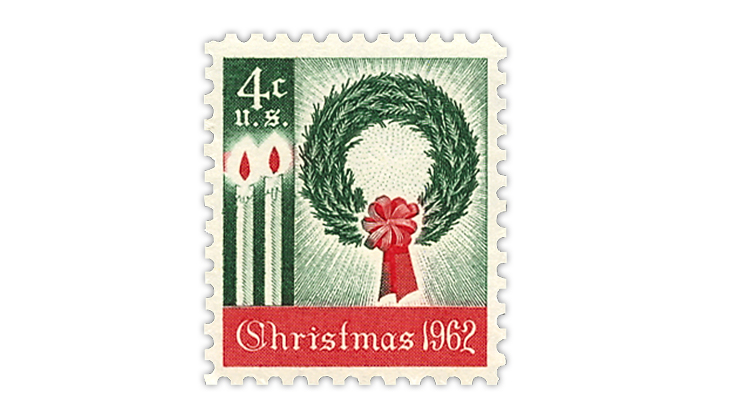 The 4¢ Christmas stamp issued in 1962 shows a Christmas wreath and two burning taper candles. It was the nation’s first holiday stamp. 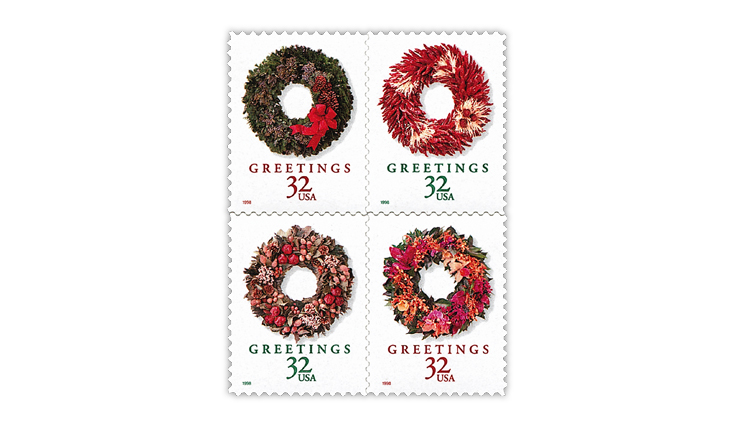 Four 32¢ Christmas Wreaths stamps were issued in 1998. An evergreen wreath was pictured, as well as other wreaths made of less traditional materials. 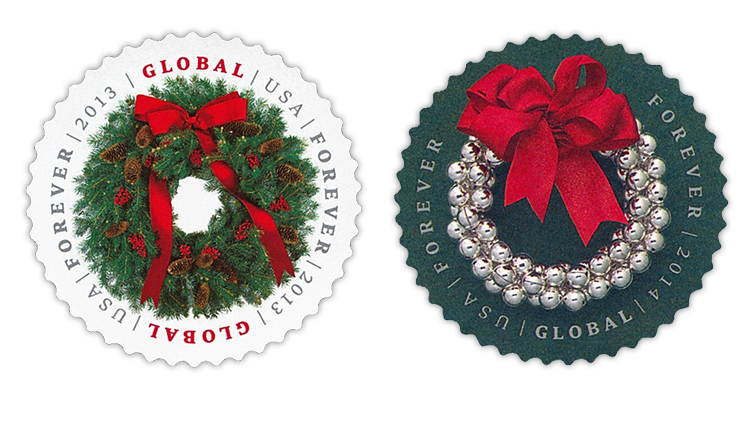 Global forever stamps issued in 2013 and 2014 each feature a wreath design, suitable for the round stamp created for international letter mail.

The USPS prepared these two first-day cancels for the Holiday Wreaths forever issue, each showing pictorial elements related to the new stamps.
Previous
Next

The ceremony is free and open to the public, but visitors can register in advance at the U.S. Postal Service website.

The new nondenominated (55¢) forever stamps will be issued in a double-sided pane of 20, which the U.S. Postal Service identifies as a booklet. They will be placed on sale nationwide on the Oct. 25 issue date.

“Inspired by the holiday decorating traditions of early America, the four wreaths featured on these stamps are classic yet contemporary,” the Postal Service said in its new-issue announcement. “Their designs create feelings of warmth and welcome.”

The stamps are being made available during the Christmas mailing season, but are inscribed only with “FOREVER” and “USA,” plus a small 2019 year date in the upper left corner.

The Postal Service usually inscribes “CHRISTMAS” on its traditional Christmas issues, which feature a portrait of the Madonna and Child or other design with a religious theme. In recent years, these traditional stamps have been issued every other year and made available over two consecutive holiday seasons. A Madonna and Child by Bachiacca forever stamp (Scott 5331) was issued Oct. 3, 2018.

The Postal Service provided a brief description of each of the four designs.

Each wreath is displayed against a paneled front door in either red or white.

The four-stamp set brings to mind the first U.S. Christmas stamp issued by the Post Office Department in 1962.

The design of the 4¢ green and red stamp (Scott 1205) features two burning taper candles at left and a round evergreen wreath at right adorned with a red ribbon bow at the bottom.

Over the years, some U.S. holiday stamps have depicted wreaths as an element of a larger design, such as the 32¢ Family at Fireplace stamp issued in a 1996 set of four showing Christmas activities (Scott 3108, 3113).

With the 2013 introduction of the round global forever stamp for international letter mail, Postal Service officials began considering designs suitable to fit within the round stamps.

A decorated evergreen wreath illustrated the second global forever stamp, issued in 2013 (Scott 4814), and a wreath made of silver bells and red ribbon appeared on the fourth stamp in the series, in 2014 (4936).

Wreaths have served as a symbol and decoration for the Christmas season for centuries.

The traditional Advent season begins on the fourth Sunday before Christmas, in anticipation of the day that commemorates the birth of Jesus.

A circular advent wreath positioned horizontally is constructed with four candles to mark the four weeks before Christmas. One candle is lit on the first Sunday of Advent, an additional candle is lit each Sunday after that, and a fifth candle in the wreath’s center — the Christ candle — is lit on Christmas Eve or Christmas Day.

The Christmas wreath is usually found hung vertically on the front door of a home or as a decoration in a window or inside the home.

Though traditionally consisting of evergreen branches, the wreath can be crafted with all types of natural or synthetic elements and decorations.

Two pictorial first-day cancels, one in black and the other in color, have been prepared for the Holiday Wreaths issue. The black postmark shows ivy and berries, while the color postmark depicts a green wreath.