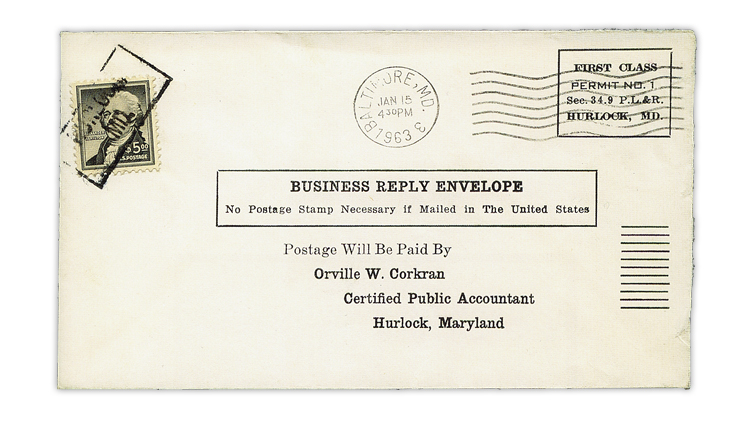 The Feb. 1 issue of Linn’s Stamp News just landed on the presses and goes in the mail to subscribers Monday, Jan. 18. And if you subscribe to Linn’s digital edition, you’re at the head of the line with early access Saturday, Jan. 16. While you wait for your issue to arrive in your mailbox, enjoy these three capsule summaries of exclusive content available only to subscribers.

Charles Snee, in Dollar-Sign Stamps, takes a closer look at a 1963 top-of-the-stack business reply mail cover franked with a single U.S. $5 Hamilton stamp that sold for $3,737.50 in Schuyler Rumsey Philatelic Auctions’ Dec. 18, 2020, Gems of Philately sale. Rumsey offered this commercial $5 Hamilton cover with an estimate of $3,000 to $4,000. In keeping with postal rules regarding BRM mail, the $5 Hamilton was applied to cover at the destination post office in Hurlock, Md. Snee provides a capsule summary of BRM mail and notes several possible rate breakdowns for the cover. Linn’s reported the first commercial on-cover use of a $5 Hamilton in 1997. Since that time, “Linn’s has documented about 20 commercial uses of the highest denomination stamp in the 1954-73 Liberty series,” Snee writes. The earliest documented use of the $5 Hamilton on a commercial cover is a 1958 registered cover mailed from Norristown, Pa., to Philadelphia, Pa. This cover sold in 2013 for $1,214.89 on eBay. Snee makes mention of other $5 Hamilton covers that Linn’s has documented over the years. Read the entire column to learn more about them.

If space and space exploration are hot topics for you, then Linn’s new Exploring Astrophilately column is certain to please. In his inaugural column, Charles J. Vukotich Jr. begins by listing various subjects that are a focus of astrophilately: “Examples of what might be commemorated are flights of balloons, high-speed and high-altitude planes, rockets, missiles, satellites and planetary flights, as well as participating tracking stations, facilities, ships and supporting aircraft.” Vukotich explains that the column “will focus on the space covers that bring together multiple elements of the space theme.” The first space cover that Vukotich trains his eye on celebrates the 1962 launch of Lt. Col. John H. Glenn, who was the first American to orbit the Earth. Space Craft Covers, a popular space cover firm, produced the cachet on this cover. Vukotich also touches upon current developments that he calls “encouraging signs for the future.” Among the highlights are the new NASA human spaceflight programs, Artemis and Orion, and private companies that are venturing into space, including Virgin Galactic, Blue Origin and SpaceX. Exploring Astrophilately is scheduled to run six times in Linn’s in 2021.

U.S. Stamp Gallery, a website developed by philatelic writer and editor Richard L. Sine and software developer Jonathan Galpin, gets a well-deserved review from William F. Sharpe in Computers and Stamps. “At the time I visited the site, there were 5,660 stamps illustrated, covering all U.S. stamps issued from 1847 through 2020,” Sharpe writes. The home page displays 74 categories of stamps, and you can search by year of issue, subject or stamp description. If you click on the image of a stamp, a short article about the stamp or the stamp set appears, along with a list of topics in which the stamp is included. The site also allows you to embed most of the stamp images on your own website, if you have one that is. You will likely want to bookmark U.S. Stamp Gallery for later reference after reading Sharpe’s informative review.