Inside Linn’s: A brief history of collecting astrophilately 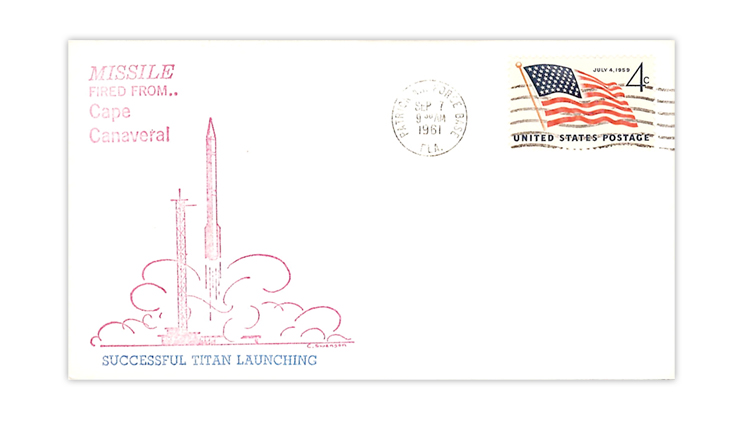 In Exploring Astrophilately in the May 24 issue of Linn’s Stamp News, Charles J. Vukotich Jr. examines the historical roots of astrophilately. The cover shown features a cachet by Carl Swanson that celebrates a Titan rocket launch Sept. 7, 1961, from Patr

The May 24 issue of Linn’s Stamp News just landed on the presses and goes in the mail to subscribers Monday, May 10. And if you subscribe to Linn’s digital edition, you’re at the head of the line with early access Saturday, May 8. While you wait for your issue to arrive in your mailbox, enjoy these three brief summaries of exclusive content available only to subscribers.

A brief history of collecting astrophilately

In his first two Exploring Astrophilately columns, Charles J. Vukotich Jr. introduced readers to the field of astrophilately, with an emphasis on acquiring covers focused on space and space exploration. In this month’s column, Vukotich gives an overview of the history of astrophilately. It all begins with NASA: “Many of the first astrophilatelists were people who worked for NASA or were contractors to the space program who obtained envelopes canceled for launches. Other collectors lived near the launch sites and got covers that way,” Vukotich explains. It didn’t take long for the entrepreneurial spirit to take hold, as space dealers and cachetmakers launched their businesses to meet growing collector demand. One of the cachetmakers Vukotich spotlights is George Goldey, who started Goldcraft Cachets. “His covers for many early launches included printed cachets on envelopes using thermography,” Vukotich writes. In 1961, astrophilately kicked into high gear when Joe Fitzpatrick started Space Craft Covers. For the rest of this fascinating story, dig into the whole column. There’s much to explore (pun intended).

“Many stamp collectors, including first-day cover fans, are starting to stick their noses out of their burrows and emerge from pandemic isolation,” writes Lloyd de Vries in First-Day Covers. He draws attention to the upcoming Great American Stamp Show, which is set to take place Aug. 12-15 in Rosemont, Ill., near Chicago. De Vries points out that the show will include several features of interest to FDC collectors, such as a cachetmakers bourse, FDC exhibits and FDC dealers. He also provides details regarding the upcoming May 17 first-day ceremony at Mount Vernon, Va., for the 10 Heritage Breeds forever stamps, “the first post-shutdown ceremony to be scheduled with participants and the audience in the same venue.” De Vries also provides helpful tips for getting ready for future events. At the top of his list of items to bring are envelopes and cards to be serviced as FDCs. He concludes by alerting readers to a combination FDC opportunity that involves the Mallard forever postal card to be issued June 1 and another stamp to be issued June 25. Read the column to discover the identity of the other stamp.

Rick Miller begins Stamps of Eastern Europe with a sobering statistic: an estimated 800,000 to 1.5 million Armenians were killed in the Armenian genocide that took place in the Ottoman Empire during 1915-17. Using a colorful combination of stamps and covers, Miller takes readers through the darkest time in Armenian history. He also profiles, by way of a 2013 Armenian souvenir sheet, Aurora Mardiganian, who witnessed the genocide first-hand and survived it. “Her memoir was published in 1918 in the United States. It is the Armenian genocide’s counterpart to Anne Frank’s The Diary of a Young Girl, which chronicles Frank’s experiences during the Holocaust,” according to Miller. Several of the stamps that Miller discusses picture monuments to the genocide. A Lebanese stamp issued in 2014 shows the Armenian Genocide Monument in Bikfaya, Lebanon. Miller explains that the bronze abstract sculpture “shows a woman standing with her arms outstretched in supplication to heaven.” It is a powerfully emotional image. If you want to learn more about this tragic event, Miller’s column is a good place to start.

Inside Linn’s: Gold from Alaska by fourth-class registered mail