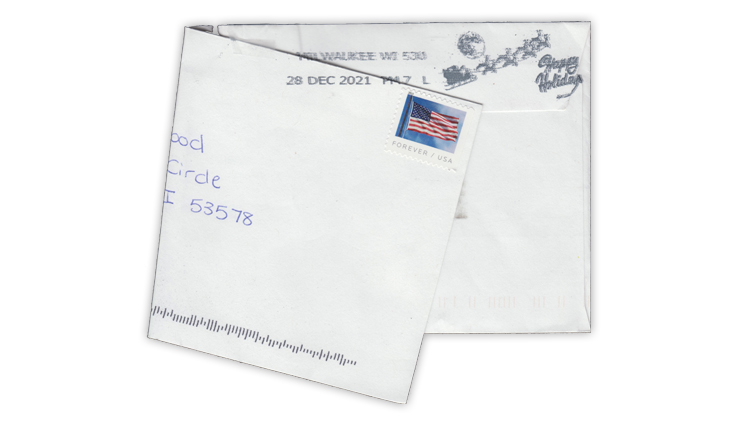 In The Odd Lot in the Feb. 14 issue of Linn’s Stamp News, Wayne Youngblood recounts the string of events that ultimately led to the reunion of the two pieces of this unusual folded cover.

The Feb. 14 issue of Linn’s Stamp News just landed on the presses and goes in the mail to subscribers Monday, Jan. 31. And if you subscribe to Linn’s digital edition, you’re at the head of the line with early access Saturday, Jan. 29. While you wait for your issue to arrive in your mailbox, enjoy these three quick glimpses of exclusive content available only to subscribers.

If you look carefully at the strange cover shown here, you will see that the sprayed-on postmark was applied after the cover was folded during postal processing. The cover also was torn in two. As Wayne Youngblood explains in The Odd Lot, it took a bit of detective work to figure out how the two pieces were eventually delivered to him in Wisconsin. He carefully examines each of the pieces and gets closer to a solution. “But I still had questions,” Youngblood writes. “How did this happen and why? Also, both halves had a diagonal crease running through the address area. It didn’t take long to figure these things out, but to do so required some understanding of modern mail handling.” Youngblood reveals the answers in this engaging read.

“From April 15, 1925, until June 30, 1928, the rate for postcards went up to 2¢, while that for postal cards remained at 1¢. As one might expect, people who mailed postcards during this period might not have been aware of these temporary new rates. In such cases, they might underpay the new 2¢ postcard rate,” writes Tony Wawrukiewicz in Modern U.S. Mail. To emphasize his point, he discusses and illustrates two postcards, both mailed in 1925, that were underpaid by ½¢ and 1¢, respectively. In both cases, as Wawrukiewicz explains, the postage deficiency was paid by the addressee. Read the column to learn why.

In each weekly issue of Linn’s, either E. Rawolik VI or E. Rawolik VII dissects the contents of a stamp mixture offered to collectors. E. Rawolik is a pseudonym that is also the word “kiloware” (a stamp mixture) spelled backward. This week, E. Rawolik VI finds much to like in a mixture of mint U.S. commemorative stamps. The 105 stamps in the reviewed sample fell under 81 different Scott catalog numbers because there were eight se-tenant blocks of four. One of the multiples that captured Rawolik’s attention was a block of four 1978 13¢ American Folk Art Quilts stamps (Scott 1748a). There’s much more in Rawolik’s upbeat review that you won’t want to miss. Enjoy the entire column in this week’s issue.

Inside Linn’s: Stamps tell the story of the Polish post office in Danzig