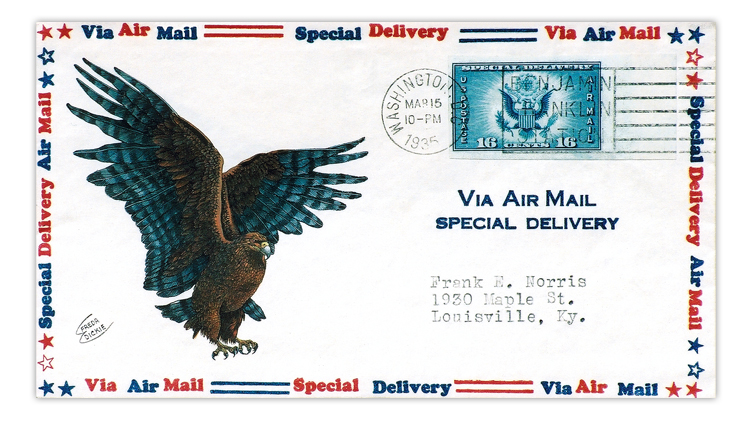 In his Spotlight on Philately column in the Jan. 20 issue of Linn’s Stamp News, Ken Lawrence introduces readers to renowned first-day cover artist Freda Dickie Weaver. Lawrence illustrates all of Weaver’s designs, including this 1978 experimental cachet a

The Jan. 20 issue of Linn’s Stamp News just landed on the presses and goes in the mail to subscribers Monday, Jan. 6. And if you subscribe to Linn’s digital edition, you’re at the head of the line with early access Saturday, Jan. 4. Here we entice you with a trio of sneak-peeks of exclusive content available only to subscribers.

Ken Lawrence sings the praises of first-day cover artist Freda Dickie Weaver in his Spotlight on Philately column. Lawrence opines that Weaver’s cachets “demonstrate the greatest technical skill, draftsmanship, historical and natural realism, and scrupulous attention to detail, without a near competitor.” To bolster his assessment, Lawrence illustrates and describes in an accompanying photo gallery all of the cachets Weaver has produced to date. It is a most impressive display.

In Nordic Stamp Scene, Christer Brunstrom embarks on a lively tour of nine Nordic countries and one ethnic region that picture flags on their stamps as expressions of nationhood and cultural connections with other Nordic countries. Brunstrom notes that some of the flags “are extremely old, while others and fairly recent creations.” If you’re seeking a new topical subject to collect, Brunstrom’s column will prove highly motivating.

Matthew Healey, in Great Britain Philately, unpacks the fascinating history behind some of the early stamps that were issued for use on Jersey and Guernsey, two islands that are Crown dependencies located in the English Channel. The postal history of Jersey and Guernsey includes mail carried by packet ships and planes, as well as bisects and locals produced when the islands were occupied by Germany during World War II.

Inside Linn’s: An Irish stamp designer tells his story